NEWS
Germany: Vandals lash out against local newspaper for reporting on right-wing extremists 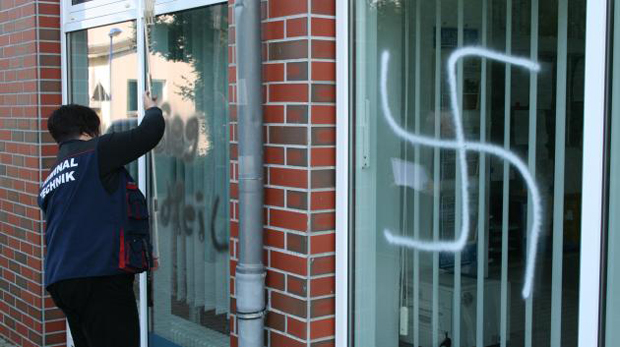 Vandals attacked the Lausitzer Rundschaufor the second time in a week.

On the night of September 4-5, the daily newspaper Lausitzer Rundschau became victim to a crime by now familiar to its employees: neo-nazis vandalised the outside of one of its office buildings in the eastern German city of Spremberg, covering it with anti-Semitic graffiti. Less than a week later, on the night of September 8-9, another Lausitzer Rundschau office in the nearby city of Lübbenau faced a similar attack.

The incidents were covered by national and local media in Brandenburg, the state surrounding Berlin. Right-wing extremism has been a sensitive topic for the Lausitzer Rundschau—only two years ago, the newspaper’s Spremberg office was also vandalized by neo-Nazis who left graffiti and an animal carcass outside the building. Shortly before the 2012 attack, the newspaper had reported critically about a right-wing extremist march in Spremberg.

Klaus Minhardt, president of the German Journalists’ Association’s local Berlin-Brandenburg chapter, sees offences like the ones against Lausitzer Rundschau as motivated by a small group of individuals lashing out against specific media reports.

“People like to make journalists their victims and to take revenge out on them. Usually, somebody does something bad and the journalist who uncovers that becomes the face of the issue,” Minhardt said.

A few days before the September 4 attack, Lausitzer Rundschau ran a report on a trial in the nearby city of Cottbus, where police testified that right-wing extremist paraphernalia was found on an alleged assailant’s body. Johannes M. Fischer, editor in chief of Lausitzer Rundschau, says the newspaper’s reporting on the trial is one reason for the recent vandalism. Another, says Fischer, is the upcoming Brandenburg state elections on September 14. Election posters in the area surrounding Lausitzer Rundschau’s offices were also covered in anti-Semitic graffiti after both of the new incidents.

This past week’s attacks on the newspaper were shocking because they were repeated in quick succession. According to Fischer, the kind of vandalisation was also more brutal than the previous incident in 2012.

“The quality is different. It has a horrible quality. The sayings are more violent. ‘Jews, Jews out, gas Jews,’ which was abbreviated as VE.G.,” Fischer said.

Because of the proximity between the two offices in Lübbenau and Spremberg, police have said that the same people are likely responsible for both of the September attacks on Lausitzer Rundschau. Fischer is also convinced that a only a few dozen people are behind the vandalisation, and he stresses that the Lausitz region is tolerant, while locals have expressed support for the newspaper after the attacks.

Lausitzer Rundschau has become well known for its aggressive reporting on neo-nazi activity in the region, which covers parts of the eastern German states of Brandenburg and Saxony. In 2013, two of the newspaper’s reporters won national prizes for their work on right-wing extremists in the area.

The “tough staff,” Fischer says, is not intimidated by the attacks on their offices and is determined to continue covering neo-nazi groups there. Fischer still refers to the vandalisation as a threat, and says he has offered reporters various options if they feel uncomfortable working after the attacks.

“They could switch to a different beat. And we also said, ‘You don’t have to write about this topic,’” Fischer said.

None of the Lausitzer Rundschau journalists took Fischer up on that offer. He adds, “They say, ‘Now we really have to do this.’”

More reports from Germany via mediafreedom.ushahidi.com:

This article was published on Monday Sept 15, 2014 at indexoncensorship.org