Students have been warned of a "zero tolerance approach" towards dissent 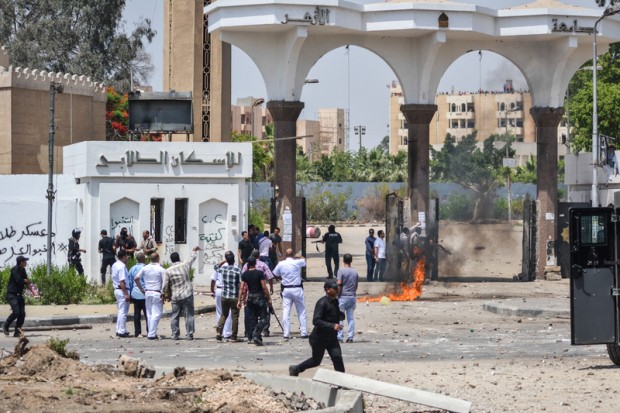 With just a few weeks to go before Egyptian universities open their gates to students for the start of the new academic year, the Egyptian authorities are feeling jittery — and rightly so.

The previous academic year saw an unprecedented wave of violence at universities across the country with clashes between “anti-coup” student-protesters and security forces on an almost daily occurrence that forced the repeated postponement of exams. At least 14 students were killed in the violence, hundreds of others were detained and hundreds more were expelled for organising or taking part in protests, according to Al Ahram.

Ahead of the new academic year, the authorities have taken some new, stringent measures to ensure the past year’s scenario is not repeated. They have also issued stern warnings to students that they will adopt a “zero tolerance approach” towards dissent. Any student who criticises President Abdel Fattah El-Sisi or any “symbol of the state” face repercussions. According to warnings issued last week by two major state universities –Ain Shams and Bani Suef — students who violate university regulations by “defaming public officials” will be subject to an internal disciplinary investigation and risk expulsion.

The announcement drew angry outcries from students and rights advocates who expressed their concern on social media. Critics fear the new regulation would curb the rights to free speech and expression. Since the 3 July ouster of Islamist President Mohamed Morsi by military-backed protests, the Egyptian authorities have imposed sweeping restrictions on freedom of expression. The massive security crackdown on dissent has targeted Islamists, liberal activists , journalists and academics.

A draconian law passed last November bans protests without prior permission from the authorities. Scores of liberal opposition activists including several prominent figures in the January 2011 mass uprising have been imprisoned for protesting against the repressive legislation. Hundreds of Muslim Brotherhood supporters also languish behind bars for staging “anti-coup” protests following the overthrow of Morsi.

In February, an Egyptian court approved the stationing of police forces at universities, overturning a 2010 verdict banning police presence at educational institutions. The Ministry of Interior hailed the latest court decision, saying the police deployment was “necessary” to quell opposition protests led by supporters of the outlawed Muslim Brotherhood (designated by Egypt as a terrorist organisation following Morsi’s ouster). The beefed-up  security presence at universities has resulted in the arrests of hundreds of students and the deaths and injuries of dozens of others over the course of the past year. Many of the detained students have been sentenced to between 3 and 17 years in jail on charges of staging unauthorised protests, having links to a terror group and inciting violence.

Meanwhile, Minister of Endowments Mokhtar Gomaa has called for a purge of Islamist-leaning deans, staff and faculty members from state universities. The independent Mada Masr quoted Minister Gomaa as saying that universities should be “cleansed of academics sympathetic to the banned terrorist group”. He has also demanded that firm action be taken against the so-called “Academics Against the Coup” — an Islamist partisan group of scholars whose members are purportedly connected Al-Azhar University’s board of directors.

In another restrictive move, Cairo University Head Gaber Nassar has called for the dissolution of  student groups or organisations of any political affiliation at all universities. According to Al Youm El Sabe’ newspaper, new students enrolling at universities will now be requested to sign a document pledging not to engage in any political activities on campus.

While the government insists the new measures are part of its ongoing war against terrorism and claims that the upsurge in violence at universities is “an extension of the nationwide Muslim Brotherhood insurgency”, a security source told Index that the ban on student protests goes beyond suppressing the Muslim Brotherhood rebellion. Speaking on condition of anonymity, he said that “the ban is not just aimed at restoring stability”.

“The government wants to spread a culture of submission and fear similar to that which prevailed under Hosni Mubarak. It is trying to instil the idea that the opposition is evil and must be crushed,” he added, warning that “students engaging in political activities will be accused by both the authorities and ‘patriotic’ government supporters of being affiliated to the terrorist group.”

The latest restrictions are a far cry from the period between the 1930s and the 1970s when Egyptian state universities were a hotbed for political activism and the student movement was an instrumental political force in Egyptian society. That ended, however, with amendments introduced to the student charter by late President Anwar Sadat in 1979. The changes “essentially were intended to undermine the power and activism of students on campus by dissolving the representative student bodies,” author Hisham Adawi wrote in his book In Pursuit of Legitimacy published in 2004.  While Hosni Mubarak, the authoritarian leader toppled by the 2011 protests, was relatively more tolerant of political expression and dissent than his predecessors Gamal Abdel Nasser and Sadat (at least during the early years of his rule), he too cited fears that “the university’s faculties were becoming strong recruiting points for militants”. Using this as a pretext, he again altered the charter to allow further administrative and security intervention in student activities. Mubarak’s amendments drew criticism from rights advocates who sarcastically called it “the State Security Charter” (in reference to the autocratic leader’s detested security apparatus). Despite sporadic periods of heightened tensions — particularly at Al Azhar and Cairo University — there has since been no true revival of the student movement as an influential political force in  society.

Despite the recent warnings by the authorities, angry students staged a small rally outside Cairo University last Wednesday to protest the new measures. The protesters denounced the restrictions, chanted anti-government slogans and demanded the release of their detained colleagues and academics. No fewer than 160 faculty members and staff have been arrested and detained since the July 2013 overthrow of President Morsi, according to an April 2014 report compiled by Egyptian academic rights groups and posted on the Al Jazeera Arabic website. Several academics charged with “supporting the outlawed Muslim Brotherhood” remain at large and have either fled the country or gone into hiding.

Dr. Emad Shahin — an internationally renowned scholar of political Islam who has taught at Harvard, Notre Dame and the American University in Cairo — was charged with espionage in January. He is listed as one of the defendants in a criminal case against several Muslim Brotherhood leaders (including the deposed President Morsi) and stands accused of “conspiring with foreign organisations to undermine Egypt’s national security”.  An outspoken critic of the bloody crackdown on Morsi’s supporters after the military takeover, Shahin learnt of the arrest warrant against him while on a visit to Washington nine months ago. He has since remained in the United States and has denied the charges in an email to the New York Times. “The accusations against me are baseless, politically motivated and beyond preposterous,” he said.

Amr Hamzawy, a liberal political scientist and former lawmaker and senior associate at the Carnegie Middle East Centre in Beirut, has also been charged with “insulting the judiciary”. In January, a lawsuit was filed against him by a lawyer after he questioned (on Twitter) a verdict against a group of foreign non-governmental organisations. Hamzawy was released after being investigated for several hours by the public prosecutor.

In a new case that has fuelled concern among rights advocates, Dr. Mohamed Tarek, an adjunct professor at the faculty of science at Alexandria University, was arrested, detained and allegedly tortured last week. He was arrested on 29 August from a street near his home in Alexandria, and has been held in custody since. Police later raided his home and confiscated his laptop and other personal belongings. There have been conflicting reports of his arrest: Interior Ministry sources claim they arrested him during a protest march in Moharram Beik district in Alexandria. Rights groups meanwhile, insist he was detained for giving his testimony of last year’s Raba’a massacre to Human Rights Watch. Tarek was injured in clashes with security forces during the forced dispersal of a sit-in staged by supporters of Morsi outside Raba’a El Adaweya Mosque in the Cairo neighbourhood of Nasr City in August 2013. His chilling account of the forced evacuation featured in a damning report released by Human Rights Watch last month.

According to the 195-page report titled All According to Plan, Egyptian police and the army used “grossly disproportionate and premeditated lethal force against overwhelmingly peaceful opposition protesters” resulting in the killings and injuries of hundreds of them in a single day of violence. The report describes the Raba’a deaths as “likely crimes against humanity” and calls for those responsible to be brought to justice. The Egyptian government has dismissed the report as “politicised” and “biased”. Days after the release of the report, Cairo Airport authorities prevented Human Rights Watch staff members from entering the country, saying the organisation “has no legal status that would allow it to operate in the country”. Human Rights Watch said the move was “an attempt by the Egyptian authorities to gag critics”.

While Egyptian authorities are hoping the new proposed measures will help end violence at state universities, sceptics warn the clampdown on freedoms can only further fuel the unrest. With the new academic year scheduled to begin on October 11 (instead of in late September as originally planned), many worry about a fresh eruption of unrest that may well result in even more bloodshed.

This article was posted on 10 Sept 2014 at indexoncensorship.org