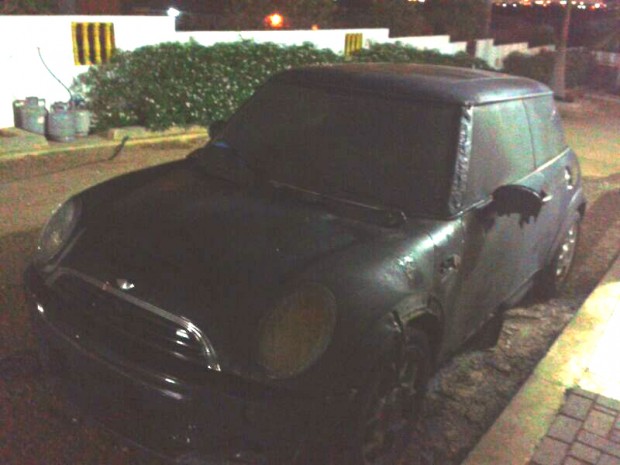 It’s a Wednesday morning in May 2014, around 3am and still dark outside. Radio journalist Richeron Balentien, his girlfriend and their 2-year-old daughter are sound asleep until the smell of fire wakes them up. When they look out of the window they see Balentien’s car burning in the yard in front of the house. He immediately knows what is going on.

“It was a clear threat,” Balentien told Index on Censorship over the phone. “It was a warning, to shut me up.” The police confirmed the car was purposely set alight. The perpetrator has not been brought to justice.

The Netherlands is always found near the top of press freedom rankings, this year second only to Finland in the Reporters Without Border’s Press Freedom Index. But rarely taken into account, however, are the Dutch islands in the Caribbean sea. The largest of these, Curacao, became a constituent country of the Kingdom of the Netherlands in 2010.

If Curacao was included in the Netherlands’ press freedom score, it might not place so high on the list. Journalists like Balentien face threats and attacks, as they fight a lonely and dangerous battle to get the truth about corruption and organised crime on the island out.

The attack on Balentien’s car happened just a few hours after Gerrit Schotte, the first prime minister of an autonomous Curacao, was arrested on allegations of money laundering and forgery during his time on power. He was released after a week in custody, but the investigation is ongoing.

Balentien aired the news on his radio station Radio Direct, while many other media outlets kept silent. “This is a small island,” he said. “Everybody knows each other. Most journalists don’t investigate. They don’t want to get into trouble”.

According to a recently published Unesco report, Curacao’s media are “not able to fulfil their role as watchdog of authorities and other powerful stakeholders in society”. It also highlights issues around journalist safety, stating that “some recent cases of harassment of journalists have caused public debate on the issue of safety and are reason for concern”.

The report concludes that social and political pressures lead to self censorship among the press, as “dependency on good relationships with sources of information on one hand and protection of relatives on the other hand is very much a threat”.

In May 2013 the island was shocked by a political murder. Helmin Wiels, a popular politician determined to rid the island of high level corruption, was shot dead by an assassin in broad daylight.

The atmosphere on the island has been tense ever since, Balentien said. “Nobody thought it was possible that someone of that calibre could get killed. It shocked the entire island,” he explained. “The atmosphere changed. Everyone is afraid.”

Two men were sentenced to life in prison for killing Wiels, but it’s still unclear who gave the orders. Many believe they came from high up. There has been speculation that former Prime Minister Schotte knew about the plan, said Balentien — something Schotte himself denies. Wiels had accused the state telecommunications company of involvement in illegal sales of lottery tickets.

The Wiels case is one of Balentien’s ongoing investigations. “I feel everything is being done to keep the truth about this murder behind closed doors,” he said. “We need to know who gave the orders.”

A 2013 Transparency International study shows “a general lack of trust in key institutions” in Curacao. The anti-corruption watchdog labels this “a major obstacle” which will “limit the success of any programme addressing corruption and promoting good governance”. As for the media, the report highlights the lack of trained journalists, with content open to influence by the private financiers and advertisers on which “many media companies are heavily dependent”. Few requirements to ensure the integrity of media employees also “undermines the independence and accountability of the media,” according to the group.

Balentien is sure that former prime minister Schotte gave the order to attack his car. “Sources told me that it was discussed within the party to set my car alight to frighten me,” he said. “I have never been afraid to talk about Schotte, his party or the corruption.”

Dick Drayer, the Curacao correspondent for the Dutch national broadcaster NOS, also believes there was a political motive behind the attack. “Schotte’s party is behind this, everybody knows that,” he told Index on Censorship.

Drayer has been working as a journalist on the island for nearly ten years. “I see is an increase of intimidation towards journalists. Journalists here are taught not to ask questions. There is verbal and physical violence. When you dig in dirty business in Curacao, you know you can get into trouble. That leads to self censorship,” he said. “In Netherlands the media controls the power, in Curacao it’s the other way around.”

While the island has had its own government since 2010, ties with the Netherlands are still strong. Corruption and organised crime in Curacao are occasionally discussed in Dutch parliament and the Dutch police is involved in the Wiels murder investigation.

But “the relationship is disturbed,” according to Dryer. “The Netherlands is careful to intervene when things are going the wrong way on the islands, because they’re afraid to be seen as the coloniser.” He thinks his country could be more involved when it comes to corruption and organised crime. “They should speak up more. The Netherlands worries about human rights in China, but when it comes to Curacao they say it’s an internal matter.”

After the car incident, Balentien’s station Radio Direct continued to receive anonymous phone threats. “I am aware,” he said. “I look around. I turn to see who’s driving behind me. I check my house before I enter.”

Despite this, he maintains he will keep up his investigative reporting on high level corruption and the Wiels murder case.”Because I don’t want this island to be ruined by these people anymore”.

Journalists attacked during anti-ISIS protest in The Hague

Journalist on trial for defamation

Restrictions on filming inside parliament building

This article was posted on 16 Sept 2014 at indexoncensorship.org

2 responses to “Curacao journalists’ lonely and dangerous battle against corruption”