NEWS
Hungarians take to the streets to protest "internet tax" 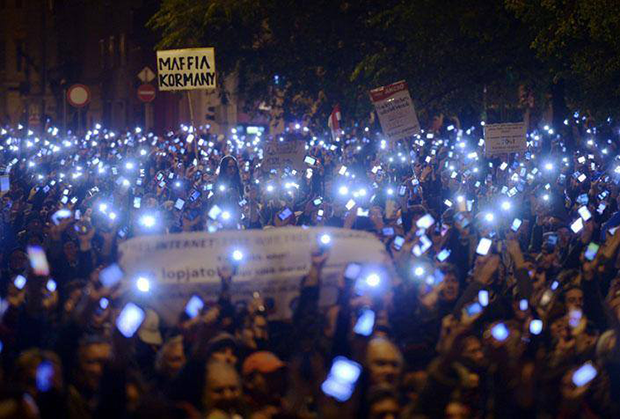 Hungarians gathered in Budapest on Sunday to protest plans to introduce a tax on internet bandwidth. (Photo: 100,000 Against the Internet Tax /Facebook)

Barring a u-turn from the Hungarian government, demonstrators will return to the streets of Budapest this afternoon to oppose Prime Minster Viktor Orban’s plans to tax the internet

The draft law proposed by Orban’s government would levy a fee of 150 forints (£0.40; €0.50; $0.60) per gigabyte of data traffic. In the face of public outrage, ruling party Fidesz promised that the tax will be capped at 700 forints for consumers and 5,000 forints for businesses. However, this did not calm the angry protesters.

Sunday’s rally that drew thousands of people to the Hungarian captial’s city center. The peaceful protest became heated when some demonstrators marched to the Fidesz headquarters, and broke the windows of the building with old computers and peripherals.

This protest was arguably the largest anti-government demonstration since 2010, when Viktor Orban came to power. In contrast with other protests, the gatherings denouncing the internet tax were not organized by the weak, discredited and fragmented opposition.

According to the Hungarian media, the new tax was Viktor Orban’s own brainchild. He did not consult with his staff or the members of his government. The prime minister plans to use the money to raise the salaries of policemen and other employees of the interior ministry.

According to official estimates, the new tax will bring into the budget about 20 billion forints annually. While the Hungarian government is saying that the companies will pay the new tax, consumers fear that in the end the costs will be pushed onto their bills. The Association of IT, Telecommunications and Electronics Companies has already said the tax would force them to raise prices.

The protests are likely to continue because Hungarians realise this is more than just another tax. Many fear that the new tax will restrict access to information, put another burden on already impoverished small businesses and act as a curb on freedom of expression. It will also be a leash on young people who mainly use online media and who tend to be critical towards the government.

“The move… follows a wave of alarming anti-democratic measures by Orban that is pushing Hungary even further adrift from Europe,” the organisers of the Facebook group 100,000 against the internet tax said in a press release. “The measure would impede equal access to the internet, deepening the digital divide between Hungary’s lower economic groups and limiting internet access for cash-poor schools and universities,” they added. The group has drawn more than 200,000 likes.

Moreover, many people believe the plan of the tax is just a way to direct the public’s attention away from the US visa ban scandal. Recently Washington banned six Hungarian state officials from entering the United States, because of their alleged involvement in high-level corruption.

This is an unprecedented step towards a country that is member of the EU and NATO, and signals a low point between the relations of Hungary and the United States.

The tax didn’t go unnoticed in Brussels either. Neelie Kroes, vice president of the European Commission responsible for the Digital Agenda for Europe tweeted that it was “a shame for users and a shame for the Hungarian government”. Her spokesperson, Ryan Heath also criticized the tax in harsh terms during an EU Commission press briefing.

The internet tax is just another in a series of “special taxes” the Orban government introduced in the last couple of years to be able to keep the budget deficit in check. Retail, banking and energy sectors, as well as telecommunications providers are required to pay extra taxes. At the same time, the Hungarian government lowered the personal income taxes and subsidises the price of electricity and water. 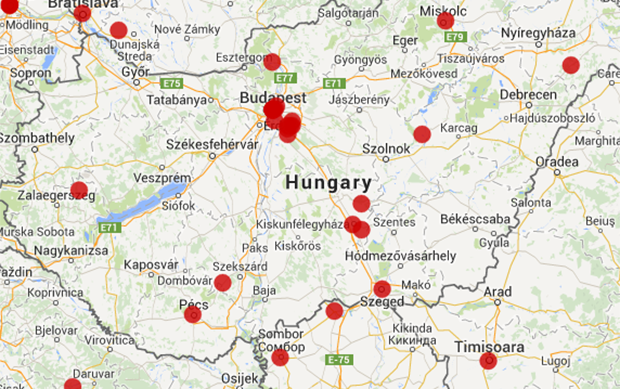 This article was posted on 28 October 2014 at indexoncensorship.org