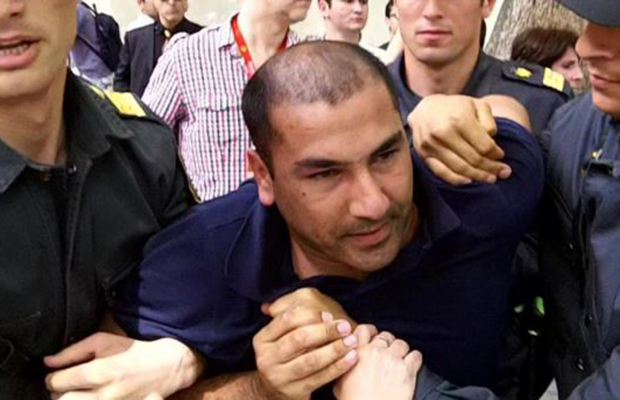 In the latest example of Azerbaijan’s crackdown on independent media, Khalid Garayev was detained by police on Oct 30, 2014.

On 30 October a Baku court sentenced opposition journalist Khalid Garayev to 25 days in detention on trumped-up charges of hooliganism and disobeying the police, dealing a new blow to Azerbaijan’s independent media at a time when its civil society is being subjected to an unprecedented crackdown.

A reporter for the leading opposition daily Azadliq, which was named the 2014 Index on Censorship Freedom of Expression Journalism award winner, and producer of “Azerbaycan Saati,” a TV programme linked to the newspaper that is broadcast by satellite from abroad, Garayev was sentenced just a day after his arrest.

Index on Censorship, International Media Support, Freedom House, Media Diversity Institute, Article 19, European Federation of Journalists, WAN-IFRA and Reporters Without Borders – all members of the International Partnership Group on Azerbaijan (IPGA) – call for Garayev’s release on appeal and condemn the witchhunt against journalists who work for Azadliq and “Azerbaycan Saati.”

Arrested on the evening of 29 October in the Baku suburb of Binagadi, Garayev was charged under articles 296 and 310.1 of the Code of Administrative Offences. The indictment said he was heard using vulgar language outside a supermarket in the centre of Binagadi and refused to comply with instructions from the police.

Appearing in court on 30 October, one of the two prosecution witnesses was a person who is apparently systematically used by the police in similar cases. The court rejected the defence’s request to view surveillance camera footage.

The sentence of 25 days in prison is close to the maximum of 30 days for such offences, for which the penalty can be just a fine. Garayev and his lawyer, Bakhruz Bayramov, accused the authorities of fabricating the entire case just to punish Garayev for his journalistic activities.

Azadlig and “Azerbaycan Saati” have long been subjected to harassment. The newspaper, which is being throttled economically, has had to suspend its print edition on several occasions and is now near to closure. Its editor, Ganimat Zahid, spent two and a half years in prison, from November 2007 to March 2010, on similarly trumped-up charges.

Amid mounting repression, the staff of “Azerbaycan Saati” have been singled out in recent months and one of its presenters, Seymour Khazi, has been in pre-trial custody since 29 August and is facing the possibility of three to seven years in prison on a charge of “aggravated hooliganism.”

A colleague, Natig Adilov, fled the country after his brother was arrested in August.

For more information about the crackdown on Azerbaijan’s civil society, read the recent IPGA report “Azerbaijan – when the truth becomes a lie.”