NEWS
Bulgaria: Murky ownership, censorship and corruption in the media 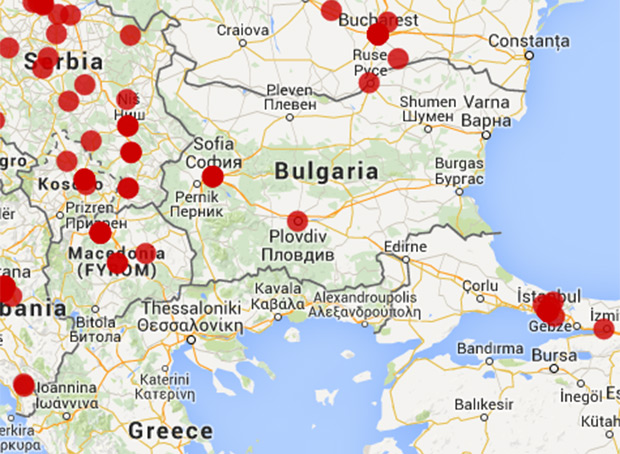 Murky ownership, a whole array of censorship practices as well as corruption are plaguing Bulgarian media, according to a survey from the Bulgarian Reporter Foundation.

The report, Influence on the Media: Owners, Politicians and Advertisers, is based on surveys with 40 media outlets carried out between January and September 2014. One hundred journalists and 20 media owners were questioned about their perception of censorship in the Bulgarian media.

The report found that journalists, senior editorial staff and owners are offered bribes by politicians and corporations. While these allegations are very difficult to prove, there is a widespread assumption among people working in the media that reporters in certain sectors receive regular payments from large companies to present them in favorable light.

“It is very hard to prove the (existence of) bribes”, said Dr. Orlin Spassov, one of the authors of the report, who is an associate professor in media and communication studies at Sofia University and executive director of Media Democracy Foundation.

There are no court cases related to the bribes, Spassov told Index. “We collect the information using anonymous interviews. In other circumstances, journalists would hardly share such statements. Even under conditions of anonymity guaranteed, some of them were afraid to speak.”

Bribes can come in many different forms, the report found. From low-interest rates offered by certain banks to luxury trips, expensive presents or even as little as the payment of a phone bill.

Corruption among editors-in-chief is also considered a widespread phenomenon. The report mentions an editor-in-chief who received a record-high amount of 5 million Leva (EUR 2,5 million GBP 2 million) for changing the orientation of a media outlet to support a political party.

Media owners are also seen as corrupt. A leaked document, which was posted online, showed that a football club transferred five-digit amounts to a sports daily for its “favorable attitude”. According to journalists, media outlets sometimes blackmail companies or local authorities by threatening negative coverage unless the target buys advertising in the publication.

According to the report, the lack of media ownership transparency is one of the biggest problems. There are a number of media outlets owned by off-shore companies, anonymous joint stock companies or bogus owners. Even if the owners are known, it is sometimes difficult to see their interests and their finances. Public registers show that in Bulgaria the majority of media outlets are making losses. The fact that a number of prestigious foreign media companies have withdrawn from the Bulgarian market in recent years made things even fuzzier.

Documents that emerged after the Corporate Commercial Bank crisis showed that politics, mass media and finances are entangled in an unhealthy knot. This marks the relationship between journalists and media owners, the report points out.

There is no clear border between the owners and the senior editors. Thirty-five per cent of the surveyed senior editors say that the owner interferes with their work. Moreover, 20 per cent stated that they are sanctioned if they refuse to follow the owner’s instructions. Thirty-six per cent of the journalists consider that there are things they cannot tell the public through their media and 16 per cent confess that they are not convinced on everything their publication publishes.

A number of media owners see their media outlets as a tool for helping or protecting their other business interests. In May 2014, an internal document was published containing instructions given by one of the owners of an influential media group to the journalists of his papers and website on how to cover an issue about the withdrawal of licenses of electricity distribution companies.

The broader the audience a media outlet has, the stronger the pressure it faces from politicians. In Bulgaria, it is a common practice that MPs or members of the government call or send SMS messages to owners, senior editors or even journalists if they are not happy with their coverage.

If a media outlet does not comply with their demands, politicians often deprive “unfriendly” media of information. Their reporters would not be invited to certain events or do not receive information which their competitors are given access to. If politicians are reluctant about a certain topic, they would refuse to participate in the talk programs. Because journalists are obliged to present all points of view, they need to drop the topic from the agenda.

Sometimes authorities also misuse the Access to Public Information Act to obstruct the access to certain media outlets. When journalists request information from ministries and other departments, they are asked to file a freedom of information request that are replied only after 14 days, the period mandated by law.

The main leverage of central and local authorities over the media is the publication of paid announcements. This is an important source of revenue for Bulgarian media, especially because advertising has strongly declined due to the economic crisis. The report cites an editor-in-chief saying that the biggest advertiser is the state. Openly there are no conditions posed to obtain advertisements, but there is an assumption that critical media outlets will not receive contracts.

Commercial advertisers also have a strong influence on the editorial output of Bulgarian media. Companies routinely ask for materials that present them in a positive light as a condition of buying advertising. Sometimes they ask outlets to play down or ignore customer complaints or run critical coverage of their competitors. Many times there is no clear differentiation between the sponsored and editorial content, the report found.

Intra-editorial censorship is also widepsread in the Bulgarian media. Easily controllable, loyal journalists are promoted into responsible positions. They make sure political positions and orders are given a professional justification, this way reporters do not feel the political pressure from their peers. Sometimes negative comments are erased from the internet.

Personal blogs are seen as a way to circumvent editorial influence, with more or less result. In one case a journalist had to close his blog after he came under pressure from the senior editorial staff. In some media outlets, journalists are forbidden to have personal blogs, other owners allow them only by written authorization.

The survey and report were completed with the support of the Sofia office of the Konrad Adenauer Foundation and its Media Program South East Europe.

For more on media violations in Bulgaria, visit mediafreedom.ushahidi.com

This article was posted on 22 Dec 2014 at indexoncensorship.org