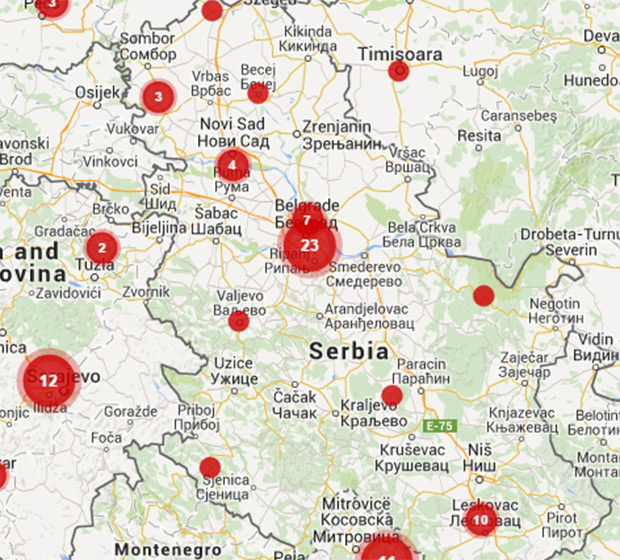 There have been 48 reported violations of media freedom in Serbia since May 2014.

Around 1 am on Thursday 3 July 2014, Davor Pasalic, editor of Serbian news agency FoNet, was brutally assaulted as he made his way home from the office. Pasalic, who had stopped for pizza, was accosted by three young men who demanded money and told him they had a gun. Pasalic refused and the men began beating him while shouting nationality-based slurs. Pasalic estimates that they struck him about 30 times before leaving him alone. The injured man then crossed a bridge leading to his apartment and was again attacked by the three men. The two attacks left him with cuts and bruises to his head and body. Four of his teeth were broken or knocked out.

“I have no clue why those three guys attacked me,” Pasalic told Index on Censorship. “One of the guys asked me: Are you a Croat?  I was born in Belgrade. I have no accent. I look like every other citizen of Belgrade. Nobody has ever asked me that question before. How did he figure out that I am ethnic Croat?”

Six months have elapsed since the brutal assault, but police have made no progress in unmasking the culprits or discovering their motives. Nebojsa Stefanovic, Serbian minister of internal affairs, insists authorities are handling the incident as a priority, while Pasalic has said he is not certain whether police are unwilling or unable to resolve the assault. Journalists’ associations in Serbia are worried, vowing they “won’t allow” the beating to become just another case in the long line of unresolved attacks on media workers in Serbia.

From 2008 to 2014, Serbian has seen a total of 365 physical and verbal assaults, intimidations and attacks on property of media professionals, according to a report by the Independent Journalists’ Association of Serbia (NUNS). The numbers should be taken as provisional, it added, since many media workers do not report attacks. The real figure is likely higher than the official one. Since May 2014 alone, Index’s European Union-funded Mapping Media Freedom has received 48 reports of violations against Serbian media including attacks to property and intimidation and physical violence, one of which was the attack on Pasalic.

“In the period between 2008 and 2011 less than 10 per cent of all attacks were processed,” NUNS said. “We also have problems with the judicial process, even in cases where the identity of the aggressor is very obvious. In Serbian courts it is common for attackers to receive minimum sentences, which obviously encourages attacks,” said NUNS’ President Vukasin Obradovic in a statement. He believes this situation leads to self-censorship within the country’s press.

Media freedom violations are also covered in the annual reports on human rights in Serbia by the Belgrade Center for Human Rights (BCHR). In 2013 they reported, among other things, that hand grenades had been thrown at the home of the owner of the website Telegraf and that four journalists were under 24 hour police protection. In 2012 they pointed out, pointed out that despite a high number of attacks on the media, trials of press workers progressed faster than trials of perpetrators of attacks on journalists: “Minister Velimir Ilic was at long last found guilty and fined almost 1.4 million RSD for physically assaulting a journalist of the Novi Sad TV Apolo back in 2003. The assailant on TV B92 cameraman in 2008 was sentenced to one year in jail in 2012. The men who threatened to kill the author of the B92 show Insider Brankica Stankovic in 2009 were sentenced to 16 months’ imprisonment and six-month and one-year conditional sentences respectively.”

BCHR noted in its 2011 report that some court judgments confirmed the suspicion that perpetrators who attack journalists can count on lenient sentences. In 2010, they found that journalists were mostly being attacked by politicians, policemen and local businessmen dissatisfied with their reporting, and that — like in the previous years — most of the perpetrators went unpunished.

There are also cases where law enforcement authorities appear to simply not be doing their jobs, according to lawyer Kruna Savovic, who is part of the NUNS legal team. Speaking to Radio Free Europe, she shared the story of a journalist who reported death threats against him and his mother to the police. He stated the identity of the suspect, named witnesses and filed a report, but instead of processing the case, officers told him he would be charged if he continued to bother them.

The attacks on Pasalic were not captured by surveillance cameras in the area, and according to Stefanovic’s statement, the lack of video is complicating the investigation. The minister also asserted that a report was not filed on the night of the incident. Pasalic refutes that, saying he had sought medical treatment at the military medical academy after the assaults and told the on-duty officers what had occurred.

Serbian journalists’ associations have been unified in condemning the incident. “Serbian society is burdened with numerous attacks on journalists which remain unsolved and their perpetrators unpunished, sometimes for decades. This encourages the attackers and contributes to spreading fear and insecurity both among journalists and the society as a whole,” the Association of Independent Electronic Media (ANEM) pointed out.

The international community has also taken note. “Journalists’ safety is a key issue in the OSCE region. There must be no impunity for crimes committed against media workers”, said OSCE Representative on Freedom of the Media Dunja Mijatovic, and in its 2014 progress report on Serbia, the European Commission stressed that threats and violence against journalists “still remain a concern”.  The Commission and other international non-governmental organisations urged Serbian authorities to keep their promised to investigate the killings of journalists Radislava Dada Vulasinovic in 1994, Slavko Curuvija in 1999 and Milan Pantic in 2001, as well as other attacks.

So far a Serbian special commission, which was created in 2013 and tasked with reopening the unresolved murders of journalists has achieved progress in the case of Curuvija. The commission found information that connects four former state security officials with the killing. They were all charged. Three of them were imprisoned while “one of the indicted men is believed to be on the run and living in an African country”. In 2014, NUNS reported, there was only one journalist under 24 hour police protection.

After six months of investigation and zero progress Pasalic ironically says that his case is “no big deal.” But, he said that the assault has had no impact on his work.

Veteran B92 journalist Veran Matic has worked against impunity and to bring murders of Vulasinovic, Curuvija and Pantic to justice. “The culture of producing fear is the most efficient form of censorship,” he told Index last November. But he added: “In the same way as impunity restricts freedom of speech, solving of these cases, at least 20 years later, will surely contribute to journalists being encouraged to do their job in the best possible way.”