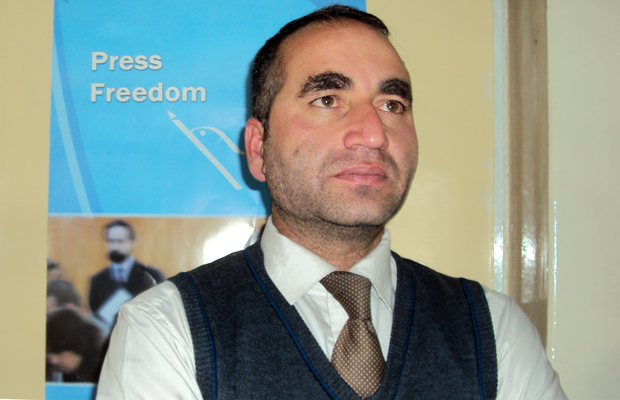 Abdul Mujeeb Khalvatgar is an Afghan journalist and the executive director of the media advocacy group Nai Supporting Open Media in Afghanistan, which works to develop a free media as the country develops a peacetime society. A radio journalist for more than 10 years, he began his career with the Internews Network in 2002 and then as general manager for a national radio channel, Salam Watander.

Khalvatgar has been a tireless campaigner for a free and fair Afghan media. Nai is the only organisation in the country to monitor violence against Afghan journalists. It has offered basic training to around 10,000 Afghan journalists, teaching investigative reporting, TV hosting and technical skills. Nai also runs a network of all-female radio stations, which Khalvatgar helped set up.

The Afghan media sector has grown from having only 15 media outlets in 2000 to almost 1,000 in 2014. With this growth, new challenges have arisen. Since 2001 more than 40 journalists have been killed in Afghanistan and hundreds of attacks on members of the press have been recorded. Many of these are believed to have been perpetrated by the government. Operating in a well-documented atmosphere of violence and hostility, Khalvatgar aims to strengthen Afghan democracy by being one of the founding fathers of a free media in the country.

Her says insecurity is one of the main problems facing Afghan journalists. “Just 20 kilometres outside of Kabul it is sometimes not possible to report on what is going on,” he says, adding that outside the big cities, journalist have to self-censor for fear of the local government, local powers, and in south and east of the country, the Taliban. Even in big cities, he explains, it is sometimes difficult to investigate stories related to corruption in depth “because you don’t feel safe to do it”. He also highlights impunity for crimes against members of the press, the undefined relationship between media owners and journalists and the lack of access to information as challenges to media freedom.

Khalvatgar joined Nai as executive director in 2010, a position he still holds. He is part of Afghanistan’s Foundation Open Society Institute, working as media coordinator and acting country manager, as well as an active member of Access to Information Law Working Group, a collective of more than 15 media professionals and activists working for better access to information law in Afghanistan. He spent the better part of 2012 successfully campaigning to get a government draft law withdrawn that would have dampened media freedom and given more power over the press to conservative bodies. He also helped launch Afghanistan’s first media awards, as well as its Legacy Fund, which raises money for families of Afghan reporters who have been killed. And he is doing this work at great personal risk.

Khalvatgar says he is delighted about the Index award nomination, but true to form, his focus on is on his country’s media community. “If I win this award, it is an award for the people; for 49 journalists who have been killed in Afghanistan, for their families, for the almost 12,000 people that are working in the media sector in Afghanistan.”

This article was posted on March 4 2015 at indexoncensorship.org