NEWS
Padraig Reidy: Women are denied the right to exist in public space -- even in death

Whether openly hateful or couched in “protective” metaphor, the message to women is always clear: public interaction is for men, and at best, you are here by our permission 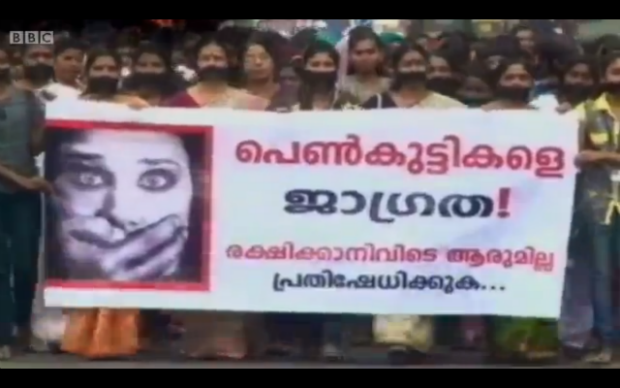 Whoever, intending to insult the modesty of any woman, utters any word, makes any sound or gesture, or exhibits any object, intending that such word or sound shall be heard, or that such gesture or object shall be seen, by such woman, or intrudes upon the privacy of such woman, shall be punished with simple imprisonment for a term which may extend to one year, or with fine, or with both.

“The lady…or the girl, or woman, is more precious than a gem, a diamond. It is up to you how you want to keep that diamond in your hand.”

“Someone put his hand inside her and pulled out something long. It was her intestines.”

– From the documentary India’s Daughter

The rape and murder of Jyoti Singh on a bus in Delhi in December horrified much of India and the world. Rape is by definition an act of violence and violation, but the details of the brutality meted out by the gang of six attackers were particularly shocking. Singh was flown to a specialist hospital in Singapore, but eventually succumbed to her injuries.

The 23-year old had been returning home from a trip to the cinema to see The Life Of Pi with a male friend. Of course, in discussions of rape, it does not matter what the victim was doing; where the victim was going, or when, or why or with whom. But it was extraordinary how the “asking for it” argument was extended in the prosecution of Singh’s killers.

Watching the BBC’s stunning India’s Daughter documentary was a disturbing experience. Singh had not gone out alone, it was true. She had not gone to a bad part of town: but she had gone out in the evening, with a man who was not a family member. That was enough.

She was female in public. That was enough to justify the attack. One attacker spoke of taking “pleasure” where you found it: the rich man will pay for his “pleasure”, the poor man will attain it “through courage” — that is, rape.

India’s Daughter was a shocking, grim and important hour of television that laid the misogyny of society bare for all to see. All, that is, except Indian BBC viewers, who were denied the opportunity to watch the documentary.

The Indian government obtained an injunction barring the film being shown in the country after it emerged the filmmakers had interviewed one of the rapists, Mukesh Singh. The attacker was apparently unrepentant, repeating the mantra that a “good girl” would not have got herself into the situation where he raped her.

Indian Home Minister Rajnath Singh was appalled, saying: “It was noticed the documentary film depicts the comments of the convict which are highly derogatory and are an affront to the dignity of women.” The government invoked section 509 of the Indian penal code

So the film was banned from television. And then later from YouTube in India. An hour of forensic, challenging film-making, exploring violence against women and the attitudes around violence against women was censored in order to protect women’s honour — a woman’s “honour” being patriarchy’s most precious bauble. Indian society had failed to protect Jiyoti Singh in life and now, still, she, through her story, was to be denied access to public space in death. This is not how we “protect” women.

This week, Naz Shah, the Labour parliamentary candidate for Bradford West (where she will challenge George Galloway) became an instant star after an article about her life and what had driven her to seek political office. Her mother had been brutalised for years. Shah’s father had run off with another woman, and her mother sought shelter for herself and her children with another man. But she found torture, not sanctuary. After years of abuse, Shah’s mother killed her tormentor. Following campaigning work from the ever-inspirational Southall Black Sisters, Shah’s mother Zoora saw her jail sentence for the killing reduced from 20 years to 12.

Borrowing a phrase from Barack Obama, Shah described how her political ambition had stemmed from the “dream of her mother”. After Shah’s father left, it was the mother, the innocent party, who was left with the shame, the besmirched honour. While in prison, Zoora Shah told her daughter that she would like to see her become a prison governor, so that she could help women in incarceration. Shah’s impulse ever since, she says, was to be in a position to influence change.

But still she realises there will be people who are not interested in women taking up public spaces. “Already my ‘character’ has been attacked and desecrated through social media and trolling. The smear campaign that has started has been some of the most vicious and disgusting I have seen. But it does not scare me, will not change me, and it in fact fuels my passion for change more,” she wrote for Urban Echo.

The impulse to deny women the right to exist in public is not limited to the streets of Delhi, or Bradford. Think of the threats received by feminist Caroline Criado Perez, by MPs such as Stella Creasy and Luciana Berger. Think, even of the sexist chants against female officials and staff that have been highlighted by the Football Association recently. The language may be openly hateful, or couched in “protective” metaphor, but the message is always clear. The public sphere, public interaction, is for men, and at best, you are here by our permission. But the question is not, fundamentally, about who grants permission. As long as we accept that that power belong to one group and not the other, then we are accepting and entrenching inequality. The aspiration is to smash any idea of who is “allowed” to go where, who is allowed to wear what, who is allowed to say what. In an equal world, there can be no concept of “permission” being granted by one group to another. Instead, as Naz Shah wrote, there must be “real meaningful and honest conversations not only with ourselves but with our families, our communities and beyond”.

This column was posted on 12 March 2015 at indexoncensorship.org