NEWS
Rebecca Vincent: Britain's next prime minister must use European Games to stand up for human rights in Azerbaijan

In helping to whitewash Azerbaijan’s ever-worsening image, the UK would only end up tarnishing its own

For the first time since the 2012 Eurovision Song Contest, the oil-rich, rights-poor nation of Azerbaijan is drawing widespread international attention. This June, the country is poised to host the inaugural European Games, which will bring an estimated 6,000 athletes from 50 countries to the capital city of Baku to compete in 20 sports.

Ahead of the games, the Azerbaijani regime has spent a great deal of time and money to promote a positive image abroad. At home, however, it is engaged in a brutal human rights crackdown. This has particularly intensified over the past year, as the authorities have worked aggressively to silence all forms of criticism and dissent.

Dozens of democracy activists are now in prison, including celebrated investigative journalist Khadija Ismayilova who was given this year’s PEN/Barbara Goldsmith Freedom to Write Award, and Leyla Yunus, one of the country’s most prominent human rights defenders. They, and many others, have been jailed on spurious charges, with some facing prison sentences of up to 12 years. Meanwhile, press freedom campaigner Emin Huseynov is trapped in the Swiss embassy in Baku, facing arrest if he leaves. These individuals have been targeted for their work defending the rights of others and telling the truth about the situation in their country.

So far, the European Olympic Committees has been happy to look the other way, stating that was “not the EOC’s place to challenge or pass judgment on the legal or political processes of a sovereign nation”. Likewise, the event sponsors do not seem bothered: BP stated that “seeking to influence the policies of sovereign governments” was not part of its role. The Sport for Rights campaign hopes, however, that the next prime minister will think twice. 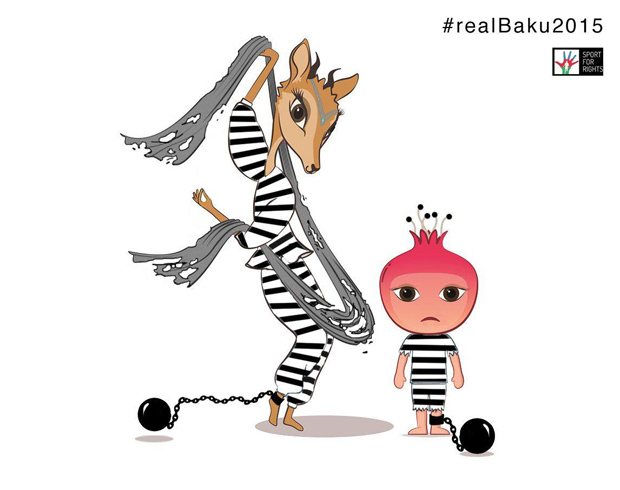 As members of the campaign, Article 19, Index on Censorship, and Platform have written to the leaders of the UK’s Labour, Conservative, Liberal Democrat, and Green parties on the eve of the general election. The campaign urged them to make statements condemning the on-going attacks on human rights and calling for the release of political prisoners in Azerbaijan.

Sport for Rights also called on the party leaders to make their participation in the opening ceremony of the games contingent upon the release of the country’s jailed journalists and human rights defenders. This is not a call for a boycott of the games by athletes or the public, but a request for the next prime minister not to miss a key opportunity to take an important stand.

In the face of growing repression in Azerbaijan, the response from the British government has so far been weak and sporadic. Statements are occasionally made; the most recent expressed that the UK was “dismayed” by the sentencing of human rights lawyer Intigam Aliyev, but stopped short of calling for his release, as did the previous statement conveying that the UK was “deeply troubled” by the sentencing of human rights defender Rasul Jafarov. But beyond statements, little else has been done — at least in the public eye.

For a country so intent on promoting its image as a modern, glamorous, international player, key political figures taking a public stand on human rights issues would have a real chance of impacting positive, democratic change. The European Games presents a timely opportunity for the next prime minister to do just that, sending the clear signal that human rights are important in the bilateral relationship.

Conversely, attendance by the prime minister at the opening ceremony of the games in the current climate, without securing the release of the jailed journalists and human rights defenders, would only serve to effectively endorse an increasingly authoritarian regime. In helping to whitewash Azerbaijan’s ever-worsening image, the UK would only end up tarnishing its own.

This article was posted on 6 May 2015 at indexoncensorship.org

2 responses to “Rebecca Vincent: Britain’s next prime minister must use European Games to stand up for human rights in Azerbaijan”