It should have been a happy day for Leyla and Arif Yunus. On 15 July, the couple — together for 37 years — saw each other for the first time in 11 months. The circumstances of their reunion, however, put a damper on what would otherwise have been a joyous occasion: it took place inside a glass cage, in a cramped courtroom in Baku, Azerbaijan. The human rights activists are on trial, on charges widely recognised to be politically motivated.

Initially scheduled for 13 July, but pushed back for unknown reasons, the Yunus’s pre-trial hearing came almost a year after they were first detained within days of each other in July and August of 2014. Leyla, director of the Peace and Democracy Institute, and Arif, a historian and researcher, have since been accused of an array of crimes, ranging from tax evasion and illegal business activities, to treason.

In the courtroom some 30 places were allocated to members of the public, who were stripped of their phones at the start of proceedings. Representatives from the German and EU embassies, as well as local journalists and NGOs were in attendance, according to Kati Piri, a Dutch member of the European Parliament who travelled to Baku for the trial. She estimated that more than half of the the crowd that had shown up, including other embassy delegations, did not manage to get into the room.

Piri told Index on Censorship that she was there to show support and solidarity for the couple, and that the European Parliament and the international community had not forgotten them and will continue to exert pressure.

“Even though the spotlight is no longer on Baku for the games, it will continue to be on when it comes to human right abuses,” she said, referring to the inaugural European Games, hosted with much fanfare by the Azerbaijani capital just weeks ago.

Proceedings lasted some 2.5 hours, and according to reports from inside the court, both Leyla and Arif looked pale and thinner. Leyla’s struggles with diabetes and Hepatitis C in prison have been well documented, but during the hearing she expressed worry in particular about her husband. Piri said Arif looked “much less strong and vivid than Leyla”. Their daughter Dinara told media in June that both her parents’ health has deteriorated since their arrest. 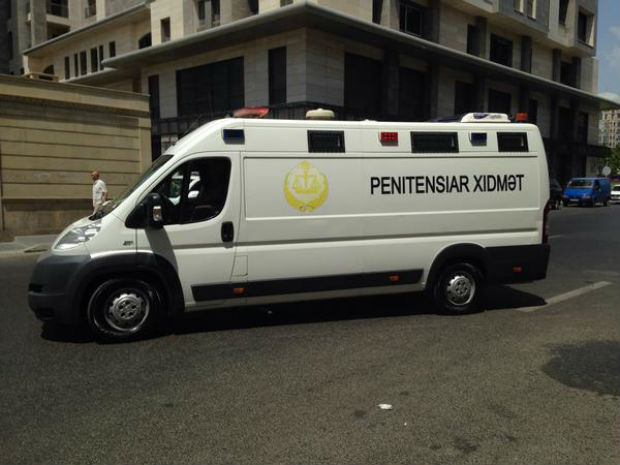 An appeal to the judges to allow Leyla to serve house arrest instead of imprisonment, was denied — as was every other motion filed by the defence, including a call for the case to be dropped altogether and a request that the couple be allowed to sit with their attorneys instead of the in the glass cages.

But Piri said Leyla seemed mentally very strong: “Mentally, they haven’t been able to break her.” Leyla took the opportunity, during a break in proceedings, to address the people in attendance, and according to Contact.az, she refused to stay silent even when the judge ignored her request to speak. “You are depriving me of the right to speak… I know that it is a false trial, but you have to give me an opportunity to speak…” she reportedly said.

The arrest of the couple in July and August 2014, was the first move in a crackdown by the regime of President Ilham Aliyvev, which has seen some of Azerbaijan’s most celebrated critical and independent voices arrested and sentenced on spurious, and frequently suspiciously similar charges, often relating to white-collar crime. Over the past few months, pro-democracy campaigner Rasul Jafarov has been handed down a 6.5 year sentence, while human rights lawyer Intigam Aliyev and journalist Seymur Hezi have been jailed for 7.5 and five years respectively. Award-winning investigative reporter Khadija Ismayilova is due in court on 22 July.

Leyla and Arif Yunus’s next hearing is scheduled for 27 July. While Piri remains hopeful of a positive outcome for the couple, she is afraid “it will not depend on the judges, but on politicians what will happen in this case”.

This article was posted on 15 July 2015 at indexoncensorship.org