NEWS
Matthew Brown: Spying on NGOs a step too far

The new cohort of the Index on Censorship youth advisory board was launched last month. The board is already participating in discussions on Facebook.

In the first of a series of posts, youth board member Matthew Brown explores mass surveillance in the UK. 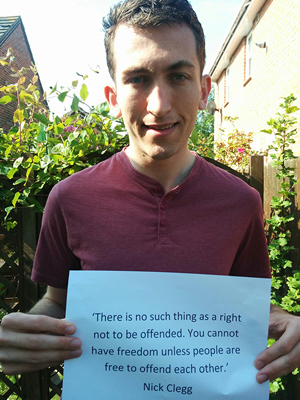 Matthew Brown is a member of the Index youth advisory board. Learn more.

I don’t often begin writing by quoting Herman Goering but on one account he was worryingly accurate. Goering stated that: “The people can always be brought to the bidding of the leaders. All you have to do is tell them they are being attacked and denounce the pacifists for lack of patriotism and exposing the country to danger. It works the same way in any country.”

Increasing levels of surveillance are often justified as essential in protecting us from imminent attack but the recent revelation that GCHQ spied illegally on Amnesty International, an organisation relying upon the secrecy of their communications with human rights defenders, demonstrates the extent to which state surveillance methods are now out of control.

It is easy to scorn states known for their dictatorial regimes but our society has only progressed to its current position through holding the state to account. If we fail to continue to do so, then the slide towards a world in which freedom of expression is restricted at any given moment the government decides appropriate is inevitable. The interception of the correspondence of NGOs raises the worrying question of how these organisations can continue their crucial work if their confidential correspondence is likely to end up out of their hands.

Related:
• Tom Carter: No-platforming Nigel
• About the Index on Censorship youth advisory board
• Facebook discussion: no-platforming of speakers at universities