This is the second of a series of posts written by members of Index on Censorship’s youth advisory board. 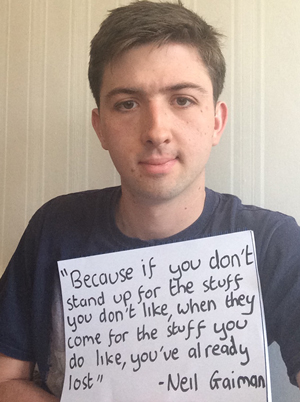 Tom Carter is a member of the Index youth advisory board. Learn more

In October 2014, UKIP’s Nigel Farage was invited by the University of Cambridge’s politics department to give an address on an undisclosed topic. This prompted two independent Facebook campaigns, one of which was from the Cambridge University Students’ Union Women’s Campaign imploring Cambridge to rescind the invitation, which it eventually was.

This is indicative of an increasing hostility among UK students towards the expression of ideas deemed unacceptable. Whether or not you agree or disagree with UKIP’s policies, they are the UK’s third largest party by vote share and very much constitute part of the political mainstream.

The fact that students are now willing to influence the speaker choices of universities is a worrying trend. Only by hearing views different to your own can your ideas be refined and fine-tuned and hearing policies expressed in public discussion is the only way to scrutinise them effectively.

Related:
• Matthew Brown: Spying on NGOs a step too far
• About the Index on Censorship youth advisory board
• Facebook discussion: no-platforming of speakers at universities