NEWS
Flag Day: The illusion of progress in Azerbaijan

As Azerbaijan celebrates its sovereignty, here’s a reminder to the country's leaders of the glaring improvements needed before they can earn their stripes 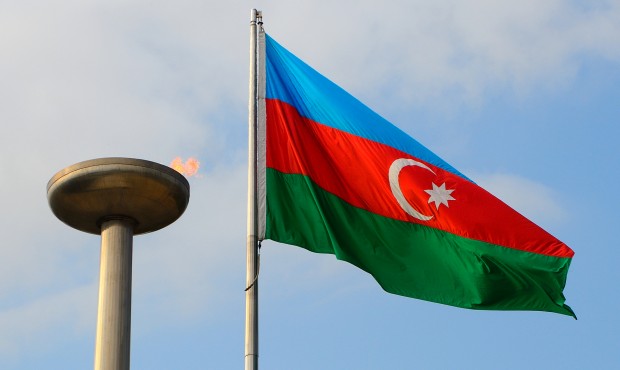 November is a month of historical anniversaries. Last Thursday was the annual commemoration of the foiling of the Gunpowder Plot and yesterday the UK fell silent to pay tribute to its war dead on Remembrance Sunday.

A much lesser-known date — at least to anyone outside Azerbaijan — is the country’s Flag Day, the celebration of the tricolour which was first adopted as the national flag on 9 November 1918.

The flag hoisted in the capital city of Baku was once confirmed by the Guinness Book of Records as being the tallest in the world. It flies on a pole 162 meters high and measures 70 by 35 meters. While the flag underwent a hiatus while Azerbaijan was part of the Soviet Union between 1920 and 1991, it is now a proud symbol of the country’s independence.

The tricolour consists of three horizontal stripes, each being deeply symbolic. The blue stripe stands for the Turkish origin of Azerbaijani people and the green stripe at the bottom expresses affiliation to Islam. Neither can be disputed. The red stripe in the middle, however, is problematic. It stands for progress, modernisation and democracy.

But Azerbaijan’s status as a modern democracy is less than convincing. Sure, the country has made some significant strides since the collapse of communism. It boasts a 98.8% literacy rate, and since the early 2000s spending on education has increased five-fold, for example.

However, there is an illusion of material progress in Azerbaijan. As Index on Censorship has been reporting, the country has experienced an unprecedented crackdown on human rights and freedoms.

Little over a week ago, Azerbaijan held a parliamentary election while an estimated 20 prisoners of conscience sat in prison. Azerbaijani journalist Khadija Ismayilova, who was sentenced to seven years and six months in jail in September for exposing state corruption, is one of them. The award-winning journalist was detained on 5 December 2014 and eventually convicted of libel, tax evasion and illegal business activity.

President Ilham Aliyev’s government has long claimed that “all freedoms are guaranteed in Azerbaijan“. Given his government’s lack tolerance for dissent, this clearly isn’t the case. Leyla Yunus, founder and director of the Institute for Peace and Democracy, and her husband, historian Arif Yunus — both outspoken critics of the government — have been detained since summer 2014 when they were arrested on charges of treason and fraud. On 13 August, the Baku Court on Grave Crimes sentenced Leyla to eight years and six months in prison and Arif to seven years in prison.

The list of journalists and activists who have been arrested, abused, beaten and even killed goes on. In June 2015, on the eve of the inaugural European Games in Baku, activists from Amnesty International and Platform were banned from entering the country. Both organisations have been highly critical of Aliyev’s government, and its continuing targeting, jailing and prosecution dissenters. Even The Guardian was blocked from reporting on the games when its reporter was barred.

The ruling party in Azerbaijan may have won an outright majority in this month’s elections, cementing Aliyev’s hold on power. However, opposition parties boycotted the vote over concerns it was neither free nor fair. Even the Organization for Security and Cooperation in Europe (OSCE) refused to monitor the election after authorities severely limited its ability to observe the vote effectively. It marks the first time since 1991 that the OSCE has not monitored an Azerbaijani election and highlights that the situation in the country is far from progressive.

Flag Day is set against a backdrop of arrests and human rights abuses. If Azerbaijan is to earn its stripes, the authorities must uphold their human rights obligations, release all prisoners of conscience and allow for elections that meet basic democratic standards.

This article was posted on 9 November 2015 at indexoncensorship.org

3 responses to “Flag Day: The illusion of progress in Azerbaijan”