NEWS
Hungary: A dispute between a media mogul and the government put journalists in a difficult situation

When prime minister Viktor Orbán fell out with Lajos Simicska, journalists working at Hír TV were made an offer they couldn’t refuse 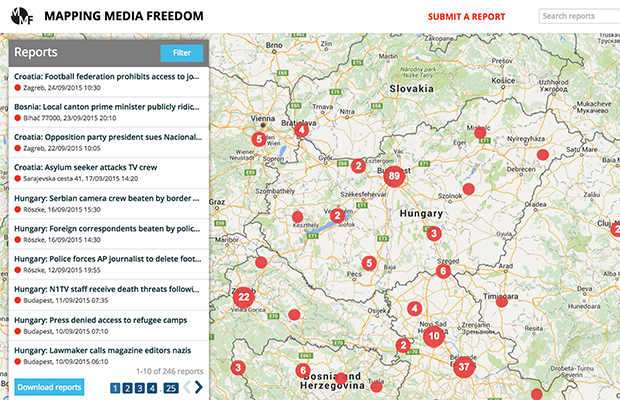 In February, journalists working at Hír TV, a Hungarian television news channel, and the daily Magyar Nemzet faced a difficult decision: they had 48 hours to decide whether to accept a job offer by the Hungarian public media. If they stayed, they found themselves “persona non grata” in the government circles. Even worse, their jobs and professional future became uncertain.

The story began when the Hungarian prime minister Viktor Orbán had a fall out with his friend and long-time ally Lajos Simicska. The wealthy businessman – owner of a considerable media portfolio, with the Hír TV and Magyar Nemzet being the most important outlets – was the closest supporter of Orbán for 35 years.

There are many speculations, but nobody quite knows what the real reason for the dispute between the two is. The conflict became public when Simicska commented in the opposition-friendly newspaper Népszava that there will be a “total war” if the government adopts the so-called media tax that would affect his media interests.

As a reaction to Simicska’s comments, a number of his media executives resigned citing “reasons of conscience”. Among them was Gábor Liszkay, the editor-in-chief at the Magyar Nemzet, the second largest daily newspaper in Hungary, who took the paper’s entire senior management with him.

This was the moment when Simicska – who, until this point was known for his extremely discreet way of handling his business interests – went public and repeatedly called Viktor Orbán a “prick”. He also insinuated that Fidesz might murder him.

“On that day, without any formal procedure, they effectively fired the 250 people from Hír TV from the Regime of National Cooperation,” Péter Tarr, the deputy director of Hír TV, said in an interview.

In a few days, journalists and staff members, who until that point were close supporters of the Orbán government, were seen as “traitors” and “enemies” by the government. Their image became nearly as bad as the opposition journalists regularly labeled as “liberal”.

MTVA, the Hungarian public media facing criticism for being the mouthpiece of the Fidesz government, somehow obtained the names and salaries of Hír TV staff. Soon many journalists working at media outlets controlled by Simicska received well-paid job offers from MTVA.

“Nearly every staff member was offered a new job with considerably better pay, and the actual offer depended on his or her status within the editorial team, professional experience and reputation,” a member of senior management at Magyar Nemzet who wished to remain anonymous told Index on Censorship. “They clearly tried to collapse the media outlets controlled by Simicska.”

Some staff members said that the media portfolio controlled by Simicska is a sinking ship, and they should accept the offer while they can. “The curtains will soon fall and they will pour salt into the earth where the television once stood,” recounted Tarr.

“The strategy was to attract the key people and to wait for the editorial teams to collapse like a domino,” our source said. “They didn’t want to spend too much money. They speculated that later the majority of the journalists will appear on the job market anyway, and at that time they will be able to negotiate on totally different terms.”

Although many important staff members jumped ship from both Hír TV and Magyar Nemzet, the editorial teams managed to do the daily workload.

Once things calmed down, both media outlets found themselves free of the constant government control they were previously used to. Nobody from the Fidesz communication staff held meetings with the Hír TV senior management, instructing them who they should invite, what type of programming they should produce or what questions they should ask. As for Magyar Nemzet, the “commissars” (people who clearly had a political mission) disappeared from the editorial rooms.

“After March 15th […] we were free to decide all of this for ourselves and we now keep ourselves to the so-called BBC principles of professional journalism,” explained Tarr in the interview.

“There is a sense of freedom in the editorial room,” our source working at Magyar Nemzet said, adding: “There are no expectations that lead to self-censorship, nobody has to write things he considers problematic from a professional point of view.”

If the complete takeover failed, the government will make the life of journalists as hard as possible. “Some top officials refuse to talk to Magyar Nemzet, and the lower ranking government clerks are obeying the orders they received from the top,” the journalist said. “We can use only a few people from the government as sources.”