Index on Censorship calls for the immediate release of Sayed Ahmed al-Mousawi. Bahrain must end the criminalization of free speech and press 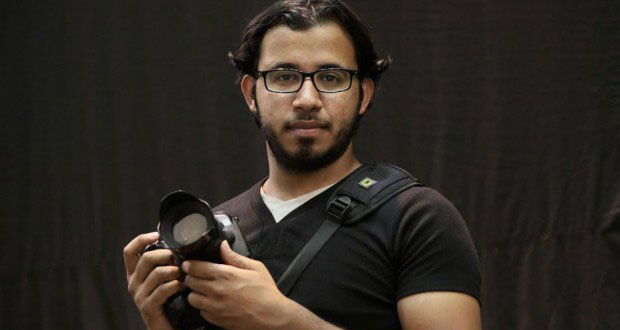 Award-winning photographer Sayed Ahmed al-Mousawi was sentenced on Monday, 23 November 2015, to 10 years in prison and had his nationality revoked, along with 12 others, after covering a series of demonstrations in early 2014. Security forces detained Al-Mousawi for over a year without trial or official charges, accused him of being a part of a terrorist cell and subjected him to torture. The undersigned NGOs condemn the government’s continued attacks on independent journalism, policy of media censorship and severe restrictions on freedom of expression in Bahrain.

Sayed Ahmed al-Mousawi, a winner of 127 international photography awards, has been incarcerated since his arrest on 10 February 2014, when security forces raided his home in Duraz village. According to al-Mousawi’s father, a group of plainclothes masked policemen arrested Sayed Ahmed and his brother. The police provided no arrest warrant and confiscated al-Mousawi’s cameras and electronic devices. Al-Mousawi alleges that he was tortured during his detention and interrogation.

Al-Mousawi’s torture follows a pattern of abuse Human Rights Watch documented in a new report released on 24 November on the ongoing use of torture in Bahraini police detention and prison. Police disappeared and tortured al-Mousawi for five days, subjecting him to severe beatings on his genitals, electrocution and hanging from a door. For the duration of his disappearance, he was stripped naked and forced to stand for long periods of time. Officers did not allow a lawyer to accompany al-Mousawi when they transferred him to the Public Prosecutor. Courts renewed al-Mousawi’s pre-trial detention six times, and he spent over a year in prison without formal charges.

“Sayed al-Mousawi’s torture took place at a time when the UK has been increasing its spending on a ‘reform programme’ for Bahrain to bolster its institutions,” said Sayed Ahmed Alwadaei, Director of Advocacy at BIRD. “It is becoming increasingly clear that this programme has failed. Torture is still systematic and unrelenting and the government has broken all promises of reform.”

During his extended detention, al-Mousawi continued to win international awards for his photography. In spite of this, the government accused him of giving SIM cards to “terrorist” demonstrators and taking photos of anti-government protests. As a result, Bahrain tried al-Mousawi under Bahrain’s vague anti-terrorism legislation. A judge later accused him and his brother of membership in a terrorist cell, which al-Mousawi continues to deny.

“Al-Mousawi’s case exposes Bahrain’s continued misapplication of its counterterrorism law to hide evidence of its human rights abuses,” said Husain Abdulla the Executive Director of ADHRB. “Taking photos of peaceful protestors is not a crime and Bahrain’s overreaction shows just how fearful the Bahraini government is of its own people.”

Bahrain’s continued arrest of journalists and photographers, who expose human rights violations, reflects a systematic campaign by the authorities to quell freedom of expression and the press. Bahrain is ranked 163 out of 180 in the 2015 World Press Freedom Index according to Reporters Without Borders. Last year, a Bahraini court also convicted another renowned photojournalist, Ahmed al-Humaidan to 10 years in prison under similar charges. Bahrain has revoked the citizenship of more than 130 individuals since 2012.

“Yet again the Bahraini government has wielded citizenship as a weapon of censorship against journalists,” said CPJ’s Middle East and North Africa program coordinator, Sherif Mansour. “We call on the Bahraini judiciary to overturn this disturbing sentence, recognize al-Mousawi’s citizenship, and free him immediately.”

We, the undersigned NGOs, call for the immediate release of Sayed Ahmed al-Mousawi, and on Bahrain to end the criminalization of free speech and press. We also call on the UK government to suspend its spending on technical assistance to Bahrain, and on the US government to reinstate the ban on arms sales to the country, until systematic torture has been eradicated and restrictions on the enjoyment of internationally-codified human rights are lifted.