NEWS
Poland: Worrying implications of defamation through the criminal code

When investigative journalist Jaroslaw Jakimczyk requested information from Qumak S.A., the technology company did something rather unexpected 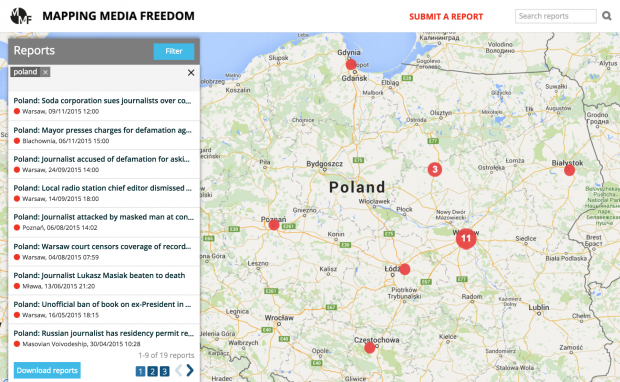 Fact-checking is crucial for any piece of journalism. This was what the investigative journalist Jaroslaw Jakimczyk set out to do when he wrote an email to the press office at IT and technology company Qumak S.A. requesting authentication of information he had.

The company, which is based in Warsaw, provides information and communication services to well-known clients, such as the major Polish bank Pekao. Jakimczyk’s questions pertained to discs of private client data that, according to his information, there was proof of a transaction of sale between the two parties. When Jakimczyk received a response from Qumak’s press office in late September, the denial of any wrongdoing on their part was followed swiftly by something rather unexpected: Qumak was now pressing charges against Jakimczyk for defamation under article 212 of the Polish penal code.

Under article 212 of the Polish penal code, defamation is when one person defames another individual, group, company or association, over such characteristics “that might lower it in the public opinion or contribute to the loss of trust which is required for the office executed by it”. Defamation can be subject to up to a year’s imprisonment if “done through means of mass communication” under paragraph 2; without mass communication, one might just get away with a fine or, rather vaguely “limitations to freedom”. Until amendments were made to the law in 2010, imprisonment was a general possibility. A public apology is usually also a popular demand with any article 212 claim.

Defamation charges appear to have been keeping Polish judges increasingly busy over the years: The Helsinki Foundation of Human Rights, in its publication on article 212, points out that while 43 article 212 claims were put forward in 2000, by 2011, this figure had risen to 232. At times, the entire Polish judicial system is exhausted. This happened to Andrzej Marek in 2004, who had accused a local politician of corruption in an article, and Marian Maciejewski, who had written articles critical of judicial inaccuracies in the city of Wroclaw.

In both instances, defamation charges were pressed, and both cases took years to reach the European Court of Human Rights to be ruled breaches of article 10 of the European Convention on Human Rights, which deals with free expression. The court ordered compensation payments for the journalists. Five more very similar cases were rejected by European Convention in the same way. But article 212 claims continue to dog journalists.

A part in the explanation for the increase of claims lies, for multiple reasons, with the internet. As Dorota Glowacka, an expert on 212 at the Helsinki Human Rights Foundation, told Index on Censorship, the fact that information is online might instill a heightened sense of urgency in potential claimants, as “the statements would be perceived as more harmful to their reputation, due to them remaining ‘online forever’”. Paradoxically, the accessibility of information through the web, according to Jakimczyk, might also work against them: “Many representatives of local oligarchies who read and analyse online publications on the subject have come to the somewhat correct conclusion that there are means to silence uncomfortable journalists.”

A review of cases of journalists charged with article 212 shows that local authorities are often involved. Earlier this month, the mayor of the small municipality in south-east Poland, Blachownia, decided to press charges against the editor-in-chief of a critical independent local news portal. As Jakimczyk noted, “previously, many of those based in Polish provinces had not heard of such a possibility or did not have enough courage to go ahead with them”, but the “amplification of cases charged with article 212 might have encouraged them to take up the same”.

In fact, council authorities sometimes press charges under 212 on behalf of a criticised local politician, arguing that such criticism “hits the good reputation of the whole council”, as Glowacka said. Such cases are rather comfortable arrangements for the politicians, as it involves no expenditures or extra efforts of their own: they can make use of the council’s legal services, and any costs relating to the case will be paid for.

Glowacka said that the cases reaching the attention of the Helsinki Human Rights Foundation have still largely been those of journalists and political activists. Increasingly, though, even the average citizen leaving a negative product or brand review, might get sued for defamation. And if comments are left anonymously, then article 212, as part of the criminal code, guarantees police support in subject identification; if one were to consider taking up the alternative route through the civilian code that also protects personal goods and good reputation, this possibility does not exist.

Attempts to strike the article from the criminal code have come from many angles over the years: between 2007 and 2012, the OSCE, the Council of Europe, as well as freedom of speech and human rights delegates of the UN openly criticised the article for curtailing freedom of speech. The diplomat Irina Lipowicz had challenged the possibility of imprisonment for defamation before the Polish Constitutional court three years ago, but that only pointed to its 2006-ruling, when it was decided article 212 did not infringe upon freedom of speech.

In 2011, the Polish citizen Mariusz S. filed a petition to remove 212 from the Polish criminal code, but the voting did not bring about a clear majority and the provision remained in place. The Helsinki Human Rights Foundation, in the run-up to the 2011 national parliamentary elections, promoted a large-scale campaign to ‘Erase article 212’. At the time, 140 Polish MPs declared they would support a move to drop the defamation clause.

It appears, though, that there is a lack of substantial, genuine political will, and that, too often, it presents itself as a handy “whip” or looming “sword of Damocles”, Glowacka and Jakimczyk said. The former points to an illustrative example of the Polish People’s Party [org.: Polskie Stronnictwo Ludowe], which officially backed the Erase initiative in 2011, only for its vice chair Eugeniusz Grzeszczak to put forward claims against journalists in his constituency a year later, when he disagreed with their revealing his payments to a favourable publisher. For Polish politicians to truly find interest in removing the provision, “an incident would be needed of accusations on article 212 pressed against a representative of this very class, which appears to consider itself as a club of untouchables”, Jakimczyck commented.

The journalist underscored another, deeper issue that the threat of defamation charges makes possible. The ties between business and media publishers are close to the extent that they lead to “the introduction of unwritten rules, limiting or excluding publication of critical material on certain companies, corporations or public institutions, which have a large advertising budget to their disposal.” It does not seem a coincidence that critical material has been increasingly held back, especially since the financial crisis in 2008, he said.

In Jakimczyck’s experience, this has pertained to any reports on firms which the state treasury has shares in, including major names such as the largest Polish insurance firm PZU, the copper and silver production company KGHM Polska Miedz, the Polish oil refiner and retailer Orlen, as well as the Polish Energy Group. Every time an article remained unpublished, “never did those responsible [at the paper in question] provide a satisfactory justification as to why publication was denied”. The incident with Qumak’s charges, tied budget-wise to the largest Polish bank, is no longer an isolated incident so much as “the further logical consequence of the new phenomenon that is preventive censorship”. Worryingly, these are not publicly accountable institutions but rather in the hand of “private capital that is not subject to societal checks and balances”.

Jakimczyk’s case, in the meantime, appears resolved: in a court ruling earlier this month, judges found that to qualify for defamation, the content in question has to have at least been shared with one other person; judges have also raised the crucial point that a journalist’s main role is to ask questions, i.e.: the journalist was just doing his job. Qumak S.A. will now have to cover any resulting fees for courts.

Although the company is legally entitled to claim revision, for the sake of the state of journalism in Poland, it is hoped that this case will remain at that, and set an ultimate example what worrying direction alleged defamation charges should stop going to in Poland.