Over a year on from its launch, the anti-immigrant PEGIDA movement isn't just attacking refugees, but also assaulting and intimidating the German press 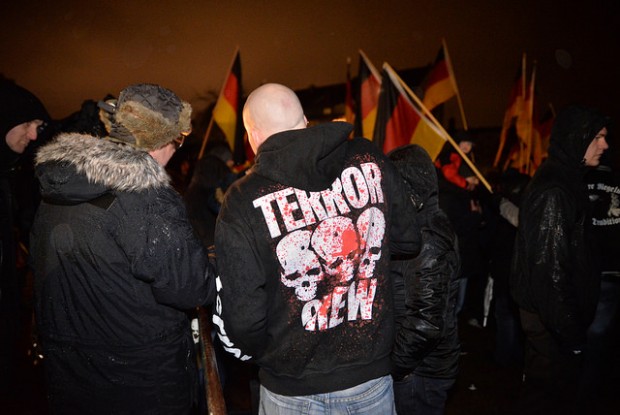 Pressure is mounting on journalists in Germany from right-wing groups that intimidate, insult and sometimes physically assault them, according to an analysis of reports filed to Index on Censorship’s project Mapping Media Freedom. In 2015 there were 29 attacks on media in Germany, 12 of those incidents were connected with the far right.

Starting in autumn 2014, the anti-immigrant, right-wing extremist group PEGIDA (Patriotic Europeans Against the Islamisation of the Occident) began as a protest movement that a year later still holds large demonstrations in cities around the country. PEGIDA, along with the populist right-wing political party Alternative für Deutschland (AfD) and similar extremist splinter groups frequently hold rallies that have become sites of aggression and violence against journalists reporting on them.

In 2014, Germany’s annual prize for Un-word of the Year for the most offensive new or recently popularised term went to “Lügenpresse” (lying press), a motto chanted at protests to smear journalists. Angry demonstrators call journalists part of a biased political elite. When journalists try to interview rally participants, they’re often turned away, yelled at or attacked.

“Index is extremely disturbed by the continuous attacks on journalists by right-wing protesters in Germany,” said  Index on Censorship’s Mapping Media Freedom project officer, Hannah Machlin. “Media workers have been repeatedly assaulted and insulted in their line of work and these aggressions must be addressed by public officials in order to preserve press freedom in the country.”

Below are five recent stand-out cases of right-wing extremist intimidation of journalists.

On 30 October, Helmut Schümann, a columnist for the Berlin daily newspaper Tagesspiegel, was attacked by several assailants in front of his apartment building in the city’s Charlottenburg neighbourhood. An attacker asked “Are you Schümann for Tagesspiegel?” and then called him a “left-wing pig”.

On the day before the assault, Schümann had published an article about the rise in xenophobia coming out of right-wing extremist groups, headlined: Is that still our country?

Schümann filed a complaint of physical assault and insult with Berlin police. Following the attack, he said: “I’ll keep running my column, positioning myself and won’t let myself be intimidated.”

At a PEGIDA rally in Dresden on 19 October, several journalists were physically attacked. The demonstration was held to mark the one-year anniversary of the protest group and attracted thousands of people.

A reporter for German international broadcaster Deutsche Welle, Jaafar Abdul Karim, was surrounded by protestors while filming with his crew. He was prevented from filming and called a racial slur before being hit in the neck. His attacker ran away.

Jose Sequeira, a cameraman for the Russian TV channel Ruptly, had his gear thrown to the ground by protesters. He was then beaten in the back and head by a group of six or seven men.

At the same protest, an employee of German public radio station Deutschlandradio was attacked by a drunk protestor and mildly injured. 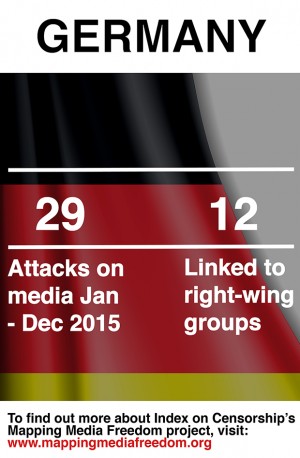 On 3 September, the offices of the newspaper Bad Hersfelder Zeitung in central Germany were graffitied with disparaging comments about the paper’s coverage of asylum seekers. The graffitied comments read “stop asylum craziness”, “no Islam” and, lo and behold, “lying press”.

The newspaper had been covering conditions in reception centres for asylum seekers before the vandalism.

On 15 November, another newspaper in the small eastern German city of Glauchau was attacked by at least one man seen throwing six rocks through the Freie Presse‘s office windows.

Police did not immediately identify a right-wing motive behind the assault while they looked for suspects.

Aggressive protesters at another large PEGIDA rally on 23 November physically assaulted a cameraman who was filming the protest with a Russian TV crew. The 43-year-old suffered non-serious injuries and was brought to a nearby hospital.

Police arrested one 28-year-old suspect in connection to the attack.

Dresden, where PEGIDA began, was host to several shameful attacks against journalists in 2015. On 28 September, one reporter from state public broadcaster Mitteldeutscher Rundfunk (MDR) was kicked and another from the newspaper Dresdner Neueste Nachrichten was punched in the face while covering a large rally organised by the extremist group.

The MDR broadcast journalist reported after the assault that he was standing with colleagues adjusting his camera when he was approached from behind by a protester. When the journalists ignored the man’s questions, several other demonstrators joined in and began attacked the reporter.

Other protesters tried to grab the camera out of the hands of the Dresdner Neueste Nachrichten reporter and then punched him in the face.

As with many of the assault cases reported from protests this year, the assailants managed to escape into the crowd before police appeared at the scene.