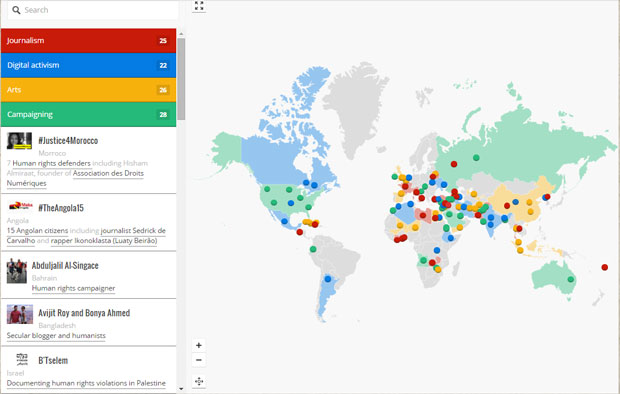 A graffiti artist who paints murals in war-torn Yemen, a jailed Bahraini academic and the Ethiopia’s Zone 9 bloggers are among those honoured in this year’s #Index100 list of global free expression heroes.

Selected from public nominations from around the world, the #Index100 highlights champions against censorship and those who fight for free expression against the odds in the fields of arts, journalism, activism and technology and whose work had a marked impact in 2015.

Those on the long list include Chinese human rights lawyer Pu Zhiqiang, Angolan journalist Sedrick de Carvalho, website Raqqa is Being Slaughtered Silently and refugee arts venue Good Chance Calais. The #Index100 includes nominees from 53 countries ranging from Azerbaijan to China to El Salvador and Zambia, and who were selected from around 500 public nominations.

“The individuals and organisations listed in the #Index100 demonstrate courage, creativity and determination in tackling threats to censorship in every corner of globe. They are a testament to the universal value of free expression. Without their efforts in the face of huge obstacles, often under violent harassment, the world would be a darker place,” Index on Censorship CEO Jodie Ginsberg said.

Those in the #Index100 form the long list for the Index on Censorship Freedom of Expression Awards to be presented in April. Now in their 16th year, the awards recognise artists, journalists and campaigners who have had a marked impact in tackling censorship, or in defending free expression, in the past year. Previous winners include Nobel Peace Prize winner Malala Yousafzai, Argentina-born conductor Daniel Barenboim and Syrian cartoonist Ali Ferzat.

The winners will be announced on 13 April at a gala ceremony at London’s Unicorn Theatre.

The awards are distinctive in attempting to identify individuals whose work might be little acknowledged outside their own communities. Judges place particular emphasis on the impact that the awards and the Index fellowship can have on winners in enhancing their security, magnifying the impact of their work or increasing their sustainability. Winners become Index on Censorship Freedom of Expression Awards Fellows and are given support for the year after their fellowship on one aspect of their work.

“The award ceremony was aired by all community radios in northern Kenya and reached many people. I am happy because it will give women courage to stand up for their rights,” said 2015’s winner of the Index campaigning award, Amran Abdundi, a women’s rights activist working on the treacherous border between Somalia and Kenya.

Each member of the long list is shown on an interactive map on the Index website where people can find out more about their work. This is the first time Index has published the long list for the awards.