Amran Abdundi: This award is for the marginalised women of northern Kenya

Kenyan activist Amran Abdundi, winner of the 2015 Index on Censorship Freedom of Expression Award for Campaigning, spoke at the ceremony in London on 18 March

Amran Abdundi is an activist who, through various channels, has worked to make life safer in northeastern Kenya – supporting women who are vulnerable to rape, female circumcision and murder. Despite death threats, Abdundi’s Frontier Indigenous Network (FIN) has set up shelters along the dangerous border between Kenya and Somalia, an area where militant terrorist groups pose a threat to many. Alongside these shelters, FIN also maps out conflict areas, targets the illegal arms trade which fuels local conflict and has set up radio listening groups. As a way of reaching women in remote areas, these circles help to dispel myths about tuberculosis treatment and female property ownership, and to tackle doctrines spread by the area’s terror organisations. She is the recipient of the 2015 Index on Censorship Freedom of Expression Award for Campaigning.

I want to thank the judges who selected me for this award after going through so many worthwhile and wonderful nominations that were submitted from around the world. Equally I want to thank Index on Censorship’s staff. I will be eternally indebted to you all.

This award goes to marginalised women of northern Kenya whom I have worked with closely for the last ten years and who have joined hands with me in fighting outdated cultural practices that deny them the right to own property, expose them to dangerous practices like FGM, and threaten them with sexual exploitation. 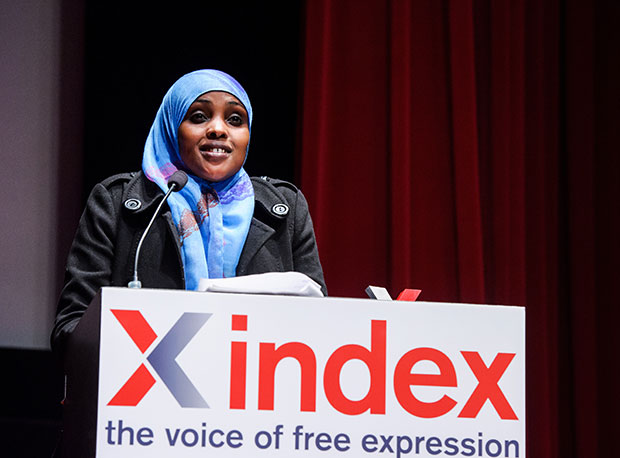 The award also goes to conflict concubines who were abducted by armed youths in the height of armed violence in northern Kenya and acted as comfort women for armed militias. When these women came back from conflict zones with children born out of wedlock, they were rejected by their families. This award is for them.

Society rejected them and they live in separate makeshift areas outside normal settlement areas in northern Kenya. Working together with the conflict concubines we engaged various stakeholders — women leaders, elders, local government officials, cultural leaders and youths in order to open a dialogue. This led to partial acceptance by the community in accommodating them. I am still working in engaging the stakeholders to fully accept them and still hope to integrate the conflict concubines in mainstream society.

This award also goes to women who through my organizational campaign are today enjoying their constitutional right to own property, land and livestock. This is contrary to past practice when all lands, livestocks and properties acquired by women was registered in name of their husbands. Or if the woman was single or widowed, her brother or father’s name. Our campaign and advocacy managed to break that outdated cultural practice.

The award also goes to women victims of armed violence perpetrated by terrorist groups, community militias and gangs along the Kenya/Somalia border. Thugs who have used their armed power to attack, rape, gang rape and block women fleeing droughts from reaching Dadaab refugee camp in northern Kenya. We used our loud speakers to confront the attackers and we documented the abuses along the border.

I have done all these things not to win any award or recognition but because of a grave reality on the ground. A horror which moved me to join hands with other women and form a woman-led organisation called FRONTIER INDIGENOUS NETWORK.

As a founder member I started as community mobiliser and now I am Executive Director. Because of my work and campaigns I have been called many names by those people who are opposed to change. I cannot mention those names here — they are unprintable or not worth mentioning. But this award also goes to them too.

Thank you Index on Censorship for selecting my work in northern Kenya for this award. The women of northern Kenya will now know that their struggles and their efforts to fight for their rights are being recognised internationally.

Today is my birthday and it will be a birthday that I will never forget. It will be in my mind for the rest of my life. You are a true partner of the women of northern Kenya. Thank you.

Related
• Index announces winners of 15th annual Freedom of Expression Awards
• Safa Al Ahmad: Facts are a precious commodity in Saudi Arabia
• Rafael Marques de Morais: I believe in the power of solidarity
• El Haqed: I will fight for freedom, equality and human rights for ever
• Tamas Bodoky: The independence of journalism in Hungary is under threat
• Special Index Freedom of Expression Award given to persecuted Azerbaijani activists and journalists
• Video: Comedian Shappi Khorsandi hosts Index on Censorship awards
• Drawing pressure: Cartoonists react to threats to free speech

This article was posted on Wednesday 18 March 2015 at indexoncensorship.org