NEWS
France: “Some think one cannot be an Arab and a journalist” 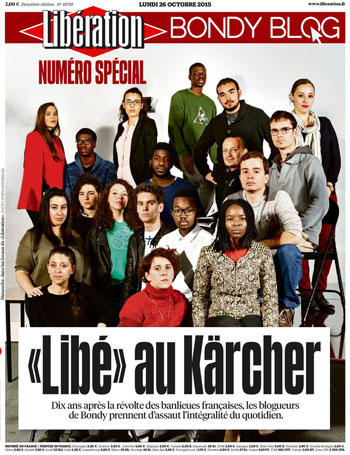 The cover of a special issue of Libération done in collaboration with the Bondy Blog, 10 years after the October 2005 riots.

This January, the trial of a police officer who had been accused of the 2012 shooting a man in the back took place near Paris. The victim was called Amine Bentounsi and was of North African origin. At the end of the proceedings, the police officer was cleared.

Journalists wrote that, with Bentounsi’s relatives present, as well as members of the police who had come to support their colleague, the atmosphere was tense. They also reported that a freelance journalist of Northern African origin called Nadir Dendoune suffered from discrimination in court, when he was the only one to be asked for his press card by a police officer while sitting among fellow journalists.

“It was 9:35am and I was sitting among other journalists when some police officers approached me, asking to see my press card. I said I’d show it to them if they asked the others as well. But the defense attorney requested silence so I decided not to make a fuss and showed my card. At noon, one of my female colleagues went to ask the officer why he had asked for my card and he said it was because he didn’t know me, except I probably come more often than her,” Dendoune told Index on Censorship.

Dendoune has worked as a journalist in print and TV for 10 years. He says he is constantly asked for his press card while on the job.

“In 2008 or 2009, I was covering something that had happened in Bondy. There must have been around 40 journalists. A police officer came to see me and told me that only journalists were allowed to be there. In France, some seem to think that you can’t be an Arab and a journalist.” That this would be the case is not suprising in a country where arbitrary and discriminatory stop and searches are usual, he said. During the presidential campaign, François Hollande promised police officers would hand receipts after a stop and search, but this promise, which was seen as an important step to improve relationships between the police and the ethnically diverse inhabitants of France, was soon dropped.

France doesn’t collect ethnic statistics, which means there is no data on the representation of minorities in society.

“[The lack of ethnic stats] seems to make it harder to put words on this”, journalist Widad Kefti told Index. She learned the ropes of journalism at the Bondy blog, a site which was created after the death of teenagers Zyed Benna and Bouna Traoré in Clichy-sous-bois sparked riots in France’s suburbs in 2005. The Bondy blog has been instrumental as an incubator of new voices.

Last October, 10 years after Benna and Traoré’s deaths, Libération published an anniversary issue in collaboration with the Bondy blog, which included Kefti’s “Open letter to newsroom directors” calling on them to hire more journalists with diverse backgrounds. “I decided the tone of the article needed to be angry, angry like my generation, who are sick of being told that change takes time. People who are older than us had a softer approach, but it hasn’t worked.”

She said her piece prompted two types of reactions: “Some told me that I was speaking nonsense and that the only thing that mattered was social diversity. But some TV and print editors contacted me to say the letter had helped them realise there was a problem in their newsroom, wanting to discuss what could be done to change this.”

The classic path to becoming a reporter in France is to enroll in a journalism school, which have selective admission policies. “It’s very complicated to get in, very closed”, Kefti said. “At the Bondy blog, we created a free preparatory course for people with diverse backgrounds, which is based on social criteria, and we’ve had great results.”

She points to Ilyes Ramdani, a young blogger turned journalist from Aubervilliers, now in his early 20’s, who came first at the entrance competition of Lille journalism school and would not have applied had it not been for the Bondy Blog preparatory course.

Even graduating from journalism school is no guarantee, Kefti said. From what she has seen, the sector hires little, which has led to a precarious existence for new journalists, and made the profession less accessible to those who don’t have financial resources to pursue the career.

Kefti plans to create a think thank of French journalists coming from diverse backgrounds that will host a brunch every month to discuss terminology with journalists, as she is convinced the lack of diversity in newsroom has an impact on the way the news is being framed. Having become tired of seeing panels of white men supposedly representing the French TV audience, she also wants to create an academy to provide media training to experts of diverse ethnic backgrounds. Social media, which has democraticised influence, can help make newsrooms more diverse as French newspapers continue their transition to digital journalism, she said.

“To me, you really have to be stupid to fail to realise what a person of a diverse ethnic background can bring to a newsroom”, Kefti said.

This article was originally posted at Index on Censorship