NEWS
Poland: Challenging official history of the Holocaust could see you branded a "traitor"

Having already taken swipes at media freedom, Poland’s ruling Law and Justice party now turns its attention to academia and the “traitors” who deviate from the official version of history 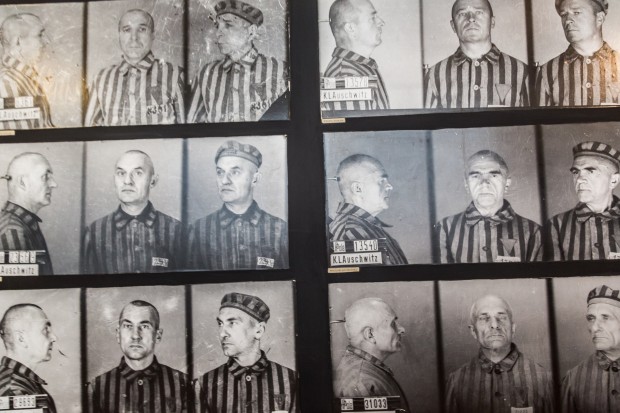 Still from an Auschwitz exhibition, 22 July 2014 in Oswiecim, Poland

When discussing academic freedom more than a century ago, German sociologist and philosopher Max Weber wrote: “The first task of a competent teacher is to teach his students to acknowledge inconvenient facts.” In Poland today, history appears to be an inconvenience for the ruling Law and Justice (PiS) party, which is introducing legislation to punish the use of the term “Polish death camps”.

The Polish justice minister Zbigniew Ziobro announced earlier this month that the use of the phrase in reference to wartime Nazi concentration camps in Poland could now be punishable with up to five years in prison. If enacted, Poland would find itself in the unique position of being a country where both denying and discussing the Holocaust could land you in trouble with the law. Holocaust denial has been outlawed in Poland — under punishment of three years “deprivation of liberty” — since 1998.

Any suggestion of Polish complicity in Nazi war crimes against Jews brings with it, in the party’s own words, a “humiliation of the Polish nation”.

Of course, Poland was an occupied country which suffered terribly under Nazi Germany, so any talk of acquiescence understandably hits a nerve. As all good history students know, however, the discipline has its ambiguities and competing theories, from the acclaimed to the crackpot, and singular, simplistic narratives are rare. But few democratic countries in the world punish those who argue unpopular historical positions. Which is why legislating against uneasy truths is the same as legislating against academic freedom.

Two recent examples show the Polish government of doing just this. Firstly, Poland’s President Andrzej Duda made public his serious consideration to stripping the Polish-American Princeton professor of history at Princeton University Jan Gross of an Order of Merit — which he received in 1996 both for activities as a dissident in communist Poland in the 1960s and for his scholarship — over his academic work on Polish anti-Semitism. Gross outlined in his 2001 book Neighbors that the massacre of some 1,600 Jews from the Polish village of Jedwabne in July 1941 was committed by Poles, not Nazis. More recently, the historian has claimed that Poles killed more Jews than they did Germans during the war, which prompted the current action against him.

Some who disagree with his arguments have labelled Gross an “enemy” of Poland  and a “traitor to the motherland”. The historian has hit back, saying in an interview with the Associated Press: “They want to take [the Order of Merit] away from me for saying what a right-wing, nationalist, xenophobic segment of the population refuses to recognise as facts of history.”

Academics too — Polish and otherwise — have come to his defence. Agata Bielik-Robson, professor of Jewish Studies at Nottingham University, points out that a “democracy has to have a voice of inner criticism”. She is worried that PiS is seeking to do away with such criticism in order “to produce a uniform historical perspective”.

Polish journalist and former activist in the anti-communist Polish trade union Solidarity Konstanty Gebert explained to Index on Censorship that PiS has made “convenient scapegoats” of people like Gross. “PiS is moving fast to reestablish a ‘positive narrative of Polish history’ by breaking with an alleged ‘pedagogy of shame’,” he said.

The party first tried — unsuccessfully — to outlaw the term “Polish death camps” in 2013 when it was in opposition. Should the law now pass, and you need help adhering to the proposed rules, the Auschwitz Museum has released an app to correct any “memory errors” you may experience. It detects thought crimes such as the words “Polish concentration camp” in 16 different languages on your computer, keeping you on the right track with prompts asking if you instead meant to write “German concentration camp”.

Poland may have lurched to the right with the election of PiS last October, but the party’s authoritarianism — from crackdowns on the media to moves to take control of the supreme court — seems positively Soviet in some respects. Attempts to control history, too hark back to the Polish People’s Republic of 1945-1989, when, in the words of Elizabeth Kridl Valkenier in the winter 1985 issue of Slavic Review, “cultural patterns” and “habits of mind” made it impossible to make historical interpretations “alien to that national sense of identity and a methodology at odds with the canons and objective scholarship”.

Gebert sees similarities between current and communist-era propaganda “in the basic formulation that there is nothing to be ashamed of in Polish history, and in Polish-Jewish relations in particular, and in the belief that there is one correct national viewpoint”.

However, now that freedom of speech exists, the government can and are being criticised for their actions. “This puts the government propaganda machine on the defensive,” Gebert said.

Just last week, President Duda spoke against the “defamation” of the Polish people “through the hypocrisy of history and the creation of facts that never took place”. He has made his motives clear: “Today, our great responsibility to create a framework […] with the dual aim of fostering a greater sense of patriotic pride at home while enhancing the country’s image abroad.”

It should be intolerable for the freedoms of any academic subject to be impinged for ideological ends. If academic freedom is to mean anything, it should include the right to tell uneasy truths, get things wrong and have you work challenged by the highest academic standards.

There’s only one place to turn for PiS to find an example of best practice on how to challenge Gross’ research, and that is to the very body the party will grant authority to on deciding on what is and isn’t a breach of the law regarding “Polish death camps”. Poland’s Institute of National Remembrance (IPN) produced several reports between 2000-03 challenging claims in Gross’ book on the Jedwabne massacre. It used research and reason — as opposed to censorship — to make the case that the historian didn’t get all the facts right. It found, for example, that German’s played a bigger part in the slaughter than Gross had claimed, and that the numbers killed were more likely to be around the 340 mark, rather than 1,600.

IPN should tread carefully, though. Any inconvenient truths with the potential to humiliate the Polish people could one day soon see it branded a “traitor”.

Ryan McChrystal is the assistant editor, online at Index on Censorship

9 responses to “Poland: Challenging official history of the Holocaust could see you branded a “traitor””