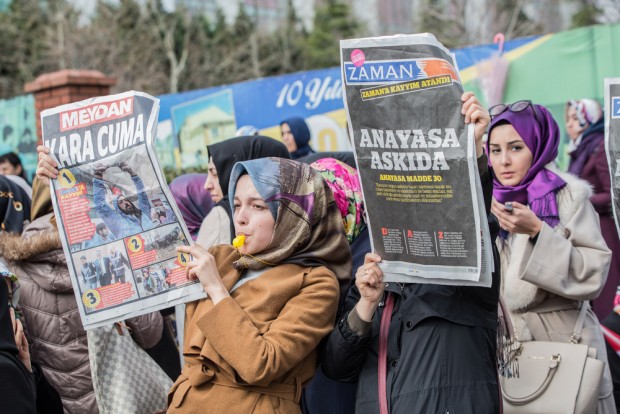 Thousands of people gather in solidarity outside Zaman newspaper in Istanbul on 5 March 2016.

Nicole Pope is an independent writer, journalist, Turkey analyst, translator, editor, consultant. Pope was a columnist for Today’s Zaman since its launch on 15 January 2007. This column was rejected by the new management of Zaman.

How do you write a column for a newspaper that still exists nominally but has been taken over by trustees appointed by an “independent” court? Such are the dilemmas in a country where democratic standards are slipping rapidly. No journalism school or manual of ethical journalism prepares one for such a situation.

Do you stop writing immediately to stand against an obvious violation of press freedom and show solidarity with colleagues who have already been dismissed? Or do you sit down to pen one last column in support of the journalists and employees still at work, whose livelihood is under threat? They are doing their job and preparing a newspaper even though they know, as I do, that in the current hostile environment it is unlikely to be published in its original form or even published at all.

I opted for the latter, which potentially also offers the opportunity to thank the readers who have followed me over the years and to comment on the rapid deterioration of fundamental freedoms in Turkey.

The takeover of the Zaman group, supported by tear gas and water cannons, was reflected on television screens around the world in all its brutality. It needs to be viewed in a broader context as the latest of many blows inflicted to the independence of the media in Turkey where journalists’ ability to cover events and hold those in power accountable has been shrinking for some time.

In recent months, the crackdown has intensified. Few independent outlets remain, particularly on television, which reaches the widest audience. This allows the authorities to control the narrative and produce a sanitized version of events that suit their purposes.

The notion that criticism can be constructive, allowing societies to improve, grow and be more innovative and also ensuring that those in power serve the interests of the population as a whole, has vanished entirely in the black and white, with us or against us world that the “new” Justice and Development Party (AKP) has constructed.

After spending more than a quarter of a century covering Turkey, I’m aware that media independence has always been an elusive concept, not just for politicians, but also for media groups — even this one, in some instances — and among journalists themselves. In the twists and turns of Turkish politics, we’ve all been caught short at one point or another.

What makes the current decline particularly painful is that for a brief moment in its early years, the AKP lifted some red lines and allowed sensitive topics to be discussed more openly. But the window did not remain open for long. Today, the power exercised in the past by the military-backed state has shifted to different hands and it is more concentrated than ever before.

Some 30 journalists are currently behind bars. Countless others face judicial harassment and pay regular visits to court to answer ludicrous charges designed to intimidate and silence them. The recent Constitutional Court’s decision to release Can Dündar and Erdem Gül provided only a brief respite.

Media independence and freedom of expression are important in and of themselves, but they also underpin other rights, allowing violations to be exposed to public scrutiny. In the absence of free media access, the human cost and the devastation caused by the blanket curfews imposed in places like Cizre and Sur, where government forces are fighting Kurdistan Workers’ Party (PKK) militants, have not received adequate attention, for instance, although ministers acknowledge that 355,000 residents have been displaced.

With much of the media under government control, the voices of progressive women are also being drowned. As the world marks International Women’s Day, the Turkish authorities have resorted to prohibitions and rubber bullets to prevent Turkish women from taking their demands to the streets.

Violence against women and the struggle for gender equality have always occupied an important place in this column because I view the prevailing brand of macho politics, which imposes views instead of seeking compromise and rules through confrontation rather than consensus, as a major hindrance to Turkey’s democratic and economic development.

This patriarchal approach, based on traditional gender roles, currently reigns supreme. It goes hand-in-hand with a top-down understanding of politics that brooks no dissent and wants to silence independent voices in the media and in society. As I bid readers goodbye, I wish I could have ended on a more optimistic note.

Nicole Pope
Nicole Pope is a journalist and writer based in Istanbul, Turkey.
Latest posts by Nicole Pope (see all)