NEWS
Zaman: The murder of a newspaper

07 Mar 2016
BY PLATFORM FOR INDEPENDENT JOURNALISM 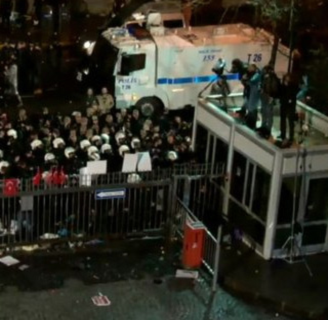 On Friday night, security forces stormed Zaman, the widest-circulating Turkish newspaper. Though many Turkish news outlets studiously avoided covering the raids, the screens of international news channels were full of images of Turkish police using tear gas and water cannon against protestors trying to protect their paper. Particularly striking were the injuries to young women wearing Islamic headgear, the very segment of the community, which the ruling Justice and Development Party (AKP) once vowed to defend.

The seizure of a news organisation by placing it into court-appointed administration is not trivial. The Zaman group employs some two thousand people, runs a nationwide network of correspondents and puts out an English language daily, Today’s Zaman, which has an international following on the web. It is impossible to imagine a court in any country with the slightest pretension of being democratic acting with such impunity.

The final headline of the independent version of Zaman was that there could be no legal basis for the takeover. Indeed, Article 30 of the Turkish Constitution reads: “A printing house and its annexes, duly established as a press enterprise under law, and press equipment shall not be seized, confiscated, or barred from operation on the grounds of having been used in a crime.” (As amended on May 7, 2004; Act No. 5170)”

It is no secret that Zaman demonstrated fidelity to the movement associated with the exiled cleric, Fethullah Gülen. The paper once supported the rise of AKP but in recent years has been a bitter critic. The legal document, which placed Zaman’s parent company into court-appointed administration, relies on the testimony of an anonymous witness who maintains that the editorial policy was dictated by what it calls the Fethullah Terror Organisation (FETÖ in its Turkish acronym). This in turn is guilty of conspiring with the outlawed Kurdistan Workers Party (PKK). It is enough to point out that the existence of FETÖ is at best hearsay, at worst the invention of subeditors in the pro-government press – never mind that Zaman itself once took a more hawkish line towards the PKK than the government itself.

According to reports reaching P24, the prosecutor struggled to find a court which would accede to his request. The Zaman building is in the Bakırköy province of Istanbul and comes under its jurisdiction. However, the request in the Bakırköy court was refused. Finally another, more friendly court acceded to the prosecutor’s demand, even though it is dubious whether it had the competence to do so.

The paper may not be guilty of treason but is has been guilty of apostasy – of having turned its back on AKP and President Tayyip Erdoğan in particular. Since then the two have been in mortal combat. Loyalists to the Gülen movement and the Zaman group in particular pursued corruption allegations against leading government officials in December 2013.

By forcing Zaman’s takeover the government lays itself open to universal condemnation. Turkey, once a proud EU applicant, now plumbs the lower depths of global rankings of transparency and free expression. Sadder still, this does not seem to trouble it a jot.

“The timing is a slap in the face,” according to a diplomat quoted in The Financial Times. “The seizure came during a visit to Istanbul by Donald Tusk, the European Council president, and two days before Angela Merkel, the German chancellor, is to see Ahmet Davutoğlu, the Turkish premier,” the paper points out. Turkey now calibrates its place in the world not as a democratic standard bearer in a troubled part of the globe but as a buffer zone between Fortress Europe and a tide of Syrian refugees. This, it believes, gives it licence to get away with the murder of a newspaper.

In Turkey all eyes, government and opposition, are on the EU to see if Brussels is prepared to put expediency above principle and if European pubic opinion is prepared to see Ankara give up all pretence of democratic governance in exchange for grudging cooperation on Syria.

It is not just the timing of the EU summit, which is significant. The Constitutional Court recently gave the presidential office a swift kick in the shins with the release from pre-trial detention of the editor-in-chief of Cumhuriyet newspaper along with his Ankara bureau chief. The high court ruled that the charges against them – that printing stories in a newspaper could correspond to treason – were essentially absurd. Since then, newspapers and ministers loyal to the president have been braying for the judges’ blood. The president himself has said he would neither respect nor abide by the high court’s decision and now appears even more determined to draft a new constitution which would allow him to do exactly that.

Not everyone in AKP supports this autocratic trend. There is a small wave of discontent from the old guard who believe a constitution that concentrates even greater powers in presidential hands is a dangerous step. These homegrown dissidents took quiet satisfaction in the court’s defence of Cumhuriyet. So one can see the raid against Zaman as the president re-asserting his authority against these pockets of resistance to one-man rule.

Turkey’s 1982 Constitution was prepared under conditions of martial law. It attempted to dictate a society in which the rights of citizen were subservient to the needs of the state. This rendered it anachronistic before the ink on the Official Gazette was dry. It has constantly been rewritten and there have been consistent demands that it be replaced.

Yet no one, not even in their wildest babblings, ever claimed the current Constitution was insufficiently authoritarian, or that it ceded too little power to the arbitrary whim of government, or that it failed to enshrine the Machiavellian principle that “might makes right”.

No one, that is, until now. As the ink on the printing presses of Turkey’s independent media run dry so too do hopes for the country’s future.

Platform for Independent Journalism
Platform for Independent Journalism (P24) is a timely initiative to support and promote editorial independence in the Turkish press at a time when the journalistic profession is under fierce commercial and political pressure. It is a not-for-profit, civil society organization which counts as its founders several experienced members of the Turkish press. It has been started with a broad mission to build capacity in the Turkish media, create a public appetite for media independence, define and promote best journalistic practice, and more specifically to encourage the transition to web-based journalism.

Latest posts by Platform for Independent Journalism (see all)