NEWS
Can Dündar: Turkey is “the biggest prison for journalists in the world”
08 Jul 2016
BY RYAN MCCHRYSTAL 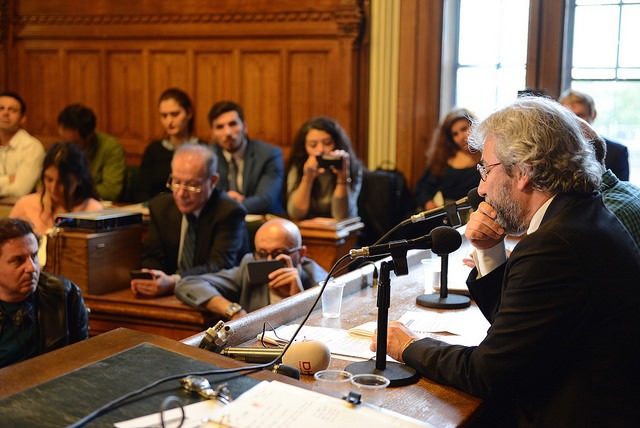 Turkish journalist, author and filmmaker Can Dündar spoke at the House of Commons last week about the state of politics and media freedom in Turkey. The event was hosted by the Centre for Turkey Studies and chaired by Scottish Liberal Democrat peer Lord Jeremy Purvis of Tweed.

“I’ve come from the biggest prison for journalists in the world,” Dündar told the audience. “There are close to 40 journalists imprisoned in Turkey — we are competing with China.”

Dündar, the editor-in-chief of Cumhuriyet, was sentenced to five years and 10 months in prison on 6 May 2016, just hours after a failed attempt on his life by a gunman. Along with Cumhuriyet journalist Erdem Gül, he was convicted of “leaking secret state information” for the paper’s reports claiming that Turkey was sending weapons to Islamists in Syria.

The pair were arrested and detained in November 2015, just days before a meeting of the EU heads of state with Turkey, the first meeting of its kind in almost six decades. “Turkey was not on the agenda because it was a democratic country, but because of the need for Turkey regarding the migrant issue,” Dündar explained.

Although he has been out of prison since February 2016, when he returns to Turkey — which he defiantly said he will — he risks serving his sentence.

Watching from his TV in solitary confinement during his stint in prison, Dündar learned of the deal that Turkey would keep asylum seekers from crossing into Europe, and in return the country would receive €3bn and visa exemptions.

Asylum seekers were “held hostage” by Turkey, Dündar said. “I was waiting until the end of the conference hoping there would be some mention of the free press, but there was nothing.”

He has been a journalist for 35 years, working in television and in print. “Throughout all these years working in the media, it has never been a paradise, but I don’t think it’s ever been quite as hellish as it is at the moment,” Dündar added. “We face oppression and censorship.”

The EU was due to release a report on Turkey’s lack of press freedom just weeks before the summit and in time for the Turkish general election. Dündar told the audience that following a meeting between Turkish President Recep Tayyip Erdoğan and EU officials, the report was delayed until after the general election.

Erdoğan’s Justice and Development Party achieved electoral victory and a week later, the report was published. “The human rights record of Turkey was condemned in strong terms,” Dündar said.

“For those of us who grew up in Turkey, in view of the Western, democratic ideals, this was very disappointing,” Dündar told the audience. “Europe is a great ideal, something to aim for.”

Dündar has lived through three military coups in Turkey. “Back then there was serious censorship,” he said. “But Erdoğan has succeeded in doing something the military couldn’t: he has instructed the media moguls close to him to buy up newspapers and TV stations, establishing a coup of friendly media.”

Dündar explains that these Erdoğan-friendly groups — mainly rich civil engineering companies receiving favours from the president — control 60% of the media, while opposition media make up only about 5-10% of the market.

Critics of Erdogan face further financial difficulty in the form of harsh fines for “insulting” Erdogan — of which there have been over 3,000 cases. “The president takes any criticism as an insult,” Dündar explained, joking: “He is the most insulted president in the world.”

Critical media outlets also find it difficult to generate revenue through advertising because “any company advertising with us will also face sanction”. The media faces further pressures in the form of “severe tax bills” and the intimidation of journalists to “toe the line”.

When journalists like Dündar aren’t visiting colleagues in prison and attending court cases in support of friends, they are preparing for their own hearings. And while they often win international awards for their work, “we can’t eat those so we have to create resources”.

Although the situation in Turkey looks unpromising, Dündar told the audience to remember that “there is another Turkey that believes in democracy and secularism”. There exists a “great existential struggle” and the aim for those like him “is to overcome this fear, but we have to be brave and we have to unite”.

In this struggle, Dündar asked the people of Europe for “support and solidarity” before Turkey “becomes a fascist regime”. He called on the Western media to do more to draw attention to the crimes of Erdoğan.