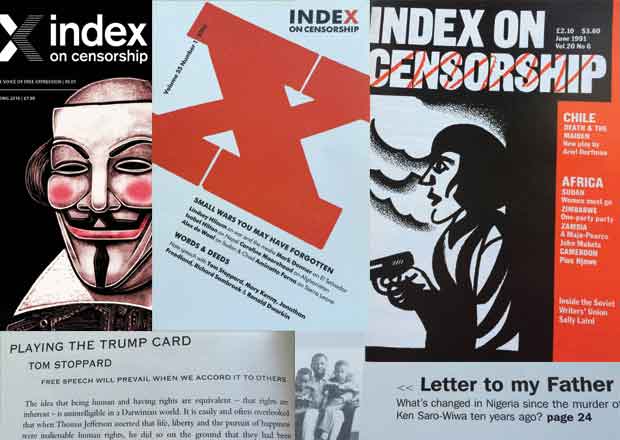 To celebrate the 250th issue of Index on Censorship magazine, we asked some of our contributors to nominate memorable articles from the publication’s long history. Here they share their memories and recommendations.

We are all familiar with the idea of luvvies. The word suggests the artist, actor or musician who, unread and emoting, trespasses onto the stage of public affairs and gets on everyone’s tits. It is sometimes true but usually wrong. One of my favourite Index magazine pieces (and there are so many to choose from) was written in 2006 by that epitome of the engaged intellectual, Tom Stoppard. Stoppard was involved with Index in its early days and has remained a patron and in this piece, he asks whether freedom of speech really is a human right. This is an awkward question in the middle of a magazine which would want to assist at every turn that a right is exactly what it is – none greater. But Stoppard argues that what makes a society one in which he would want to live is not the demanding of a right, but the according of it – the day-by-day renewed assumption that others will say what they want. Because that’s the way we choose to live.

Playing the Trump Card by Tom Stoppard was published in February 2006 (volume 35, no 1)

As I am trying to finish a major piece of writing, I didn’t have the time to go to the office where most of my Index back issues await me. I remember stories and poems from countries that generally receive little or no attention and wanted to highlight one of those. Index has published so many of my own works over the decades (I especially think Trademark Territory or Je Suis José Carrasco piece are relevant today), but, hands down, I would have to choose the publication of [my 1990 play] Death and the Maiden as my most important memory. Index was the first to publish the text before it became famous. This is typical of Index’s commitment to those who are on the margins of public notoriety, its mission to bring out of the darkness the voices that are suppressed by tyrants or by neglect and indifference, the voices of the Paulinas of the world.

I would have to pick Fabrizio Gatti’s piece Undercover Immigrant, which is a stunning piece of journalism. Gatti spent fours years undercover, investigating migrant journeys from Africa to Europe. What is remarkable about his piece, an extract of his book published for the first time in English by Index, is that he so successfully managed to hide his true identity as a Italian by assuming the identity of Bilal, a Kurdish asylum seeker. By doing this, Gatti got unique access into the Lampedusa’s migrant centres, the tiny island in the Med that has become a symbol of Europe’s migrant crisis. Through telling the story of “Bilal”, he was able to get fascinating perspective on the migrant journeys and reveals the shocking stark reality of being a migrant in Italy, a situation which 10 years on from Gatti’s undercover reports has sadly barely changed. Like then, thousands of migrants still die in dinghies trying to reach Europe.

Undercover Immigrant was published in Spring 2015 (volume 44 , issue 1), within a special report on refugee voices. You can also listen to an extract of the piece via an Index podcast

I am without hesitation going to choose the whole of your Shakespeare-themed spring 2016 edition. I’m choosing it because from the beginning of my career I fervently believed that there was more to Shakespeare – indeed more to all drama – than simply getting one’s teeth into a juicy part. From every corner of the unfree world, the essays you have printed bear me out; theatre is a danger to ignorance and autocracy and Shakespeare still holds the sway. To quote my favourite aperçu: Shakespeare’s plays, like iron filings to a magnet, seem to attract any crisis that is in the air. I congratulate you and Index on giving such space to a writer who is still bannable after 400-plus years.

Staging Shakespeare Dissent was a special report published in spring 2016 (volume 45, issue 1), with an introduction by Index on Censorship magazine editor Rachael Jolley on how Shakespeare’s plays plays have been used to circumvent censorship and tackle difficult issues around the world

There are too many articles to choose from, but I chose Ken Wiwa’s Letter to my Father, as it perfectly demonstrates Index on Censorship’s commitment to story-telling. Ken Wiwa’s letter [to his father and environmental activist Ken Saro-Wiwa who was hanged during Nigeria’s military dictatorship] reminds the reader that behind significant political events are personal stories, like the relationship between a son and his father. Index recognises the power of personal stories in order to reach the widest audience.

Index will celebrate 250 issues of the magazine next week at a special event at MagCulture. To explore over 40 years of archives, subscribe today via Sage Publications. Or sign up for Exact Editions’ digital version, which offers access to 38 back issues.