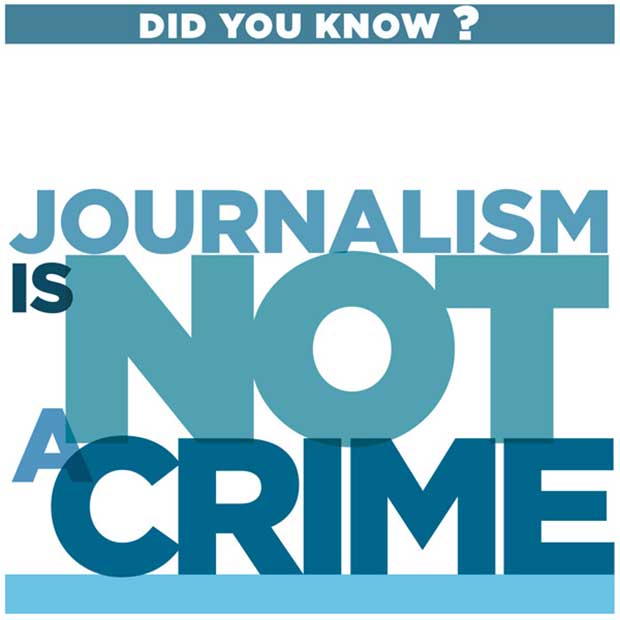 Index on Censorship supports the “I am a journalist” campaign launched by journalists and media freedom advocates from Turkey.

We stand in solidarity with our colleagues in Turkey who fiercely continue their jobs despite facing relentless attacks and attempts to silence them. We also express our support to the 44 journalists and news distributors in jail, and to those facing arrest as retaliation for exercising their right to freedom of expression and freedom to inform.

Here is the campaign statement:

I am a journalist!

Journalism is not a crime.

In Turkey, harassment of the press is getting worse by the day.

Those who are struggling to protect media freedom and do their jobs are forced to pay a heavy price.

Journalists reporting from conflict zones are subjected to constant threats, putting their lives in danger.

Reporters, editors and writers often face criminal investigations, and can be prosecuted for defamation. Many of them are held in custody awaiting trial or are imprisoned because of their reports or posts on social media.

Journalists are easily labeled as enemies of the state, traitors or spies, and are prosecuted on such charges as “spreading propaganda of terrorist organisations”.

Foreign journalists who live and report from Turkey have not been immune to these allegations. Journalism has come under attack during different periods of Turkish history but members of the international press have never been targeted on this scale.

Journalists in the mainstream media are forced to work in such conditions that they cannot do their jobs properly anymore, and can be easily fired if they question the official government line. Heavy censorship is the norm and critical voices are constantly stigmatised.

The facts are restricted by frequent media blackouts. Those the challenge the blackouts are usually labelled as traitors, or even as terrorists, and presented as criminals. Various independent media outlets are under permanent threat of being shut down.

People from different sectors of society who show solidarity with journalists to defend press freedom, as well as the right to information, have also become targets of investigation and prosecution.

However, these pressures have not stopped a group of journalists from traveling to Diyarbakır from the western cities of Istanbul, Ankara and Izmir this year to show solidarity with their colleagues who work under immense pressure in conflict zones. They stand together in front of prisons, the courthouses and at news desks.

In a society where the right to information is restricted, one cannot speak of democracy.

Therefore, as journalists we will do everything within our power to be the voice of those who have been marginalised, imprisoned, and silenced for doing their jobs and defending the freedom of press and freedom of access to information for all.

As journalists from Turkey, we cry out once again:

Journalism is not a crime!

One response to “Standing in solidarity with Turkey’s journalists”