STATEMENT
Turkey: Charges against five journalists must be dropped
14 Jul 2016
BY INDEX ON CENSORSHIP 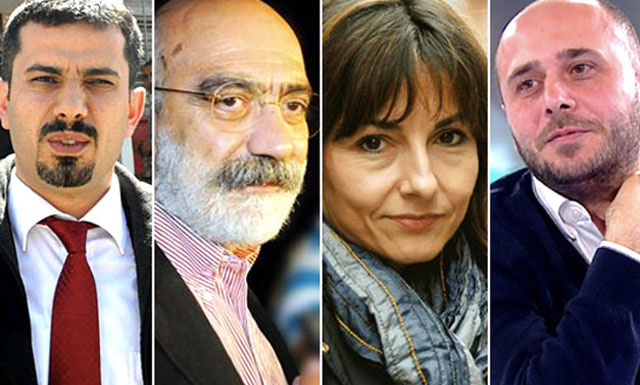 Charges of acquiring and divulging state secrets, membership of, and administration of a terrorist organisation brought against five journalists, including four former members of Taraf newspaper’s editorial and investigative staff, must be dropped and one of the accused, Mehmet Baransu, must be released immediately and unconditionally, PEN International, English PEN, German PEN, Swedish PEN, PEN America, ARTICLE 19, the Committee to Protect Journalists, the European Federation of Journalists, the Ethical Journalism Network, IFEX, Index on Censorship, the International Federation of Journalists, Global Editors Network and Reporters Without Borders said in a joint statement today.

‘These charges are a clear infringement of the right to free expression and a free press in Turkey and must be dropped, and Baransu released. It’s yet another example of abuses by the Turkish authorities of the problematic Anti-Terror law to silence investigative journalists. The law must be reformed without delay,‘ said Carles Torner, Executive Director of PEN International.

The charges concern Taraf editor, Ahmet Altan; deputy editor, Yasemin Çongar; Taraf journalists Mehmet Baransu, Yıldıray Oğur and, a fifth journalist, Tuncay Opçin. All five journalists are facing charges of acquiring and divulging documents concerning the security of the state and its political interests punishable by up to 50 years in prison. Mehmet Baransu and Tuncay Opçin are facing additional charges of ‘membership and administration of a terrorist organization’ and face a possible 75-year prison term.

The charges are detailed in a 276 page indictment, which was accepted on 20 June 2016 by the Istanbul High Criminal Court, 16 months after the initiation of the investigation. Baransu has been held in pre-trial detention since his arrest on 2 March 2015. The journalists’ next hearing is due to be held on 2 September 2016.

The indictments and the materials presented by the prosecutor in relation to the case are open to very serious doubts, suggesting that the charges are politically motivated.

While large parts of the indictment against the journalists focuses on a series of controversial news reports, titled the ‘Balyoz (Sledgehammer) Coup Plan’[1], published in Taraf between 20-29 January 2010, about an alleged military coup to overthrow the Justice and Development Party (AK Party) government, the charges do not, in fact, relate to this story. Indeed, the indictment does not suggest Taraf’s decision to publish the Balyoz papers was criminal and Balyoz does not figure in the specific charges presented at all.

Instead, the indictment brings charges of acquiring and divulging state secrets against the five journalists concerning the ‘Egemen Operation’ plan – an out of date military war plan to respond to a Greek invasion. However Taraf did not publish state secrets regarding this operation, as a prior judgment of the Turkish Constitutional Court affirms.

‘Beyond the simple problem of a lack of evidence, there are serious concerns regarding the indictment which suggest it has been written to obfuscate facts and to implicate the journalists in involvement in the Balyoz case, an already controversial story, to limit public support for their situation,’ said Erol Önderoğlu from Reporters Without Borders (RSF).

Additionally, 46 pages of the indictment prepared against the former Taraf journalists have been copied directly from the indictment against Cumhuriyet journalists, Can Dündar and Erdem Gül, who exposed illegal arms transfers by the Turkish Intelligence Service (MIT) into Syria and were sentenced to prison for five years for this crime. The degree of direct reproduction is evident from the fact that one paragraph of the indictment even starts with the words “The Defendant Can Dündar.”

‘The fact that large parts of the indictment have been copied from another high profile case targeting journalists raises significant concerns about the motivation and professionalism of the Prosecutor: not only does this call into question the extent to which the facts and evidence of the case have been properly examined, it reinforces concerns that the charges may be politically motivated’ said Katie Morris, Head of the Europe and Central Asia Programme at Article 19.

PEN International, English PEN, German PEN, Swedish PEN, PEN America, ARTICLE 19, the Committee to Protect Journalists, the European Federation of Journalists, the Ethical Journalism Network, IFEX, Index on Censorship, the International Federation of Journalists, Global Editors Network and Reporters Without Borders call on the Turkish authorities to immediately and unconditionally release Baransu and to drop all charges that the five journalists face as a result of their work in public interest. Such legal actions against journalists, result in a pervasive ‘’chilling-effect’’ among the rest of the media in the country, which is compounded where fundamental fair trial safeguards are not upheld.

[1] These reports were based on a series of classified documents and CDs acquired from an anonymous source. They led to widespread discussion in the country, which prompted Turkish prosecutors to initiate a controversial trial against the alleged coup-plotters named in the documents. The army officers implicated in the alleged coup plot revealed by Taraf have repeatedly claimed that the evidence against them was fabricated. In 2014, Turkey’s highest court ruled that the authorities had violated the officers’ right to a fair trial, leading to fresh hearings and mass releases from prison; including releases for several officers that had previously received sentences of up to 20 years in prison.