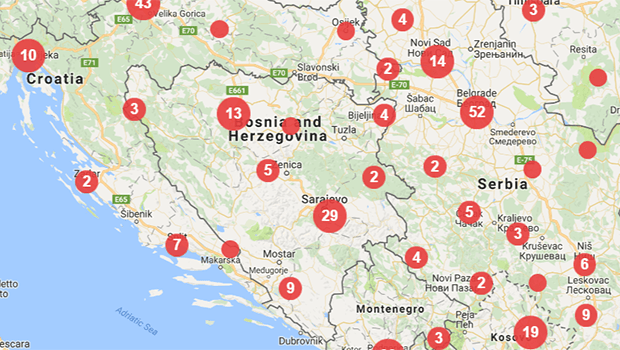 University professors, poets and artists signed an open letter in support of three media workers who were targeted with death threats and hate speech. The letter, which was published in the Sarajevo daily Oslobodjenje on 21 July, said that the journalists are “targeted just because they expressed their view which is different from the majority’s”.

“Regardless of whether one agrees or not with the above-mentioned views, instigation of death threats and public lynching through creating a modern day Bosnian Index Librorum Prohibitorum is unacceptable,” the letter said.

The cases were reported to Mapping Media Freedom over three days in July.

In the first incident, Vuk Bacanovic, a journalist for the Radio-Television of the Federation of Bosnia and Herzegovina, was fired for allegedly violating the internal rules and the ethical code of the television network. In a Facebook post on his personal page he criticised a public art installation that depicted the federal entity of Republika Srpska as a mass grave and concentration camp. Bacanovic wrote that he “hates the assholes from Sarajevo” who were “talking crap” by saying the city has a multi-ethnic spirit. After articles about the post were published, Bacanovic received numerous death threats via Facebook, regional TV outlet N1 reported.

Nenad Velickovic, editor-in-chief of educational career-oriented magazine Skolegijum, was then verbally harassed and threatened as a result of three articles written by Filip Mursel Begovic, editor-in-chief of the weekly Stav, which were published in June and July. Begovic described Velickovic as a “man with a hidden and dangerous agenda”, “a falsifier” and a “Serbian nationalist” while describing the magazine Skolegijum as “extended arm of Serbian chauvinism”, Analiziraj.ba reported.

The letter was also written in support of the secretary general of BH Journalists’ Association Borka Rudic, who was subjected to verbal harassment by unidentified men after a high-ranking member of the Party of Democratic Action, an ethnic Bosniak political party, described her, amongst other things, as a “lobbyist for Fethullah Gulen”, website media.ba, reports.

The three incidents reflect the ethnic divisions and stereotypes that were re-enforced by the 1992-1995 war in Bosnia. The post-conflict society is governed through a complex political system established by the 1995 Dayton Peace Accords. The power-sharing constitution recognises each of the three major ethnic groups – Bosniaks (Muslims), Serbs (Orthodox) and Croats (Catholics) – as the constituent peoples of Bosnia. In practice, the recognition means that anyone not identified as belonging to one of the three groups could not be elected to hold a public office, despite a 2009 European Court of Human Rights ruling ordering the constitution to be revised.

Following the formula set out in the Dayton Accords, Bosnia and Herzegovina is divided into two entities – the Federation of Bosnia and Herzegovina, with majority ethnic Bosniak and ethnic Croatian inhabitants, and the Republika Srpska, with majority ethnic Serbian population. Additionally there is the district of Brcko, which is separate enclave jointly administered by both.

The three groups also differ on the future of Bosnia. Some Bosniaks advocate for a more unitary state, while some Serbs want a more confederate arrangement or even dissolution of the state. At the same time there are Croats that want a separate ethnic entity. The competing visions of Bosnia’s future are heavily influenced by historic and recent incidents including charges of genocide, crimes against humanity and other atrocities that occurred during the 1992-95.

The Centre for Security Governance says that the governing structure “has discouraged inter-group cooperation and reconciliation. Political elites have pandered to ethnic fears, resulting in the electoral victories of ethnonational parties via the phenomenon of ‘ethnic outbidding’.”

Some politicians use friendly media to advocate for further strengthening of ethnic politics, while journalists and intellectuals that argue for strengthening civic identities and bridging ethnic hatred are usually vilified as traitors if they are from the same ethnic background, or enemies, if they are from another ethnicity. All of the cases addressed in the open letter originated in Bosniak nationalist media and were targeted at either another ethnicity or individuals who prefer civic above ethnic identity. Velickovic was described as a “man with a hidden and dangerous agenda” by a Bosniak journalist because he was advocating for non-nationalistic school curriculum.

“The importance of maintaining strong journalistic ethics cannot be underscored enough, especially given the country’s recent history. Members of the media profession must strive to be balanced, refrain from inflaming already tense inter-ethnic relations and guard against being used for political ends,” Hannah Machlin, project officer for Index on Censorship’s Mapping Media Freedom, said.

Dunja Mijatovic, OSCE Representative on Freedom of the Media, in an open letter also noted that the latest events open a very worrying chapter on the safety of journalists.

“People engaged in investigative reporting and expressing different opinions, even provocative ones, should play a legitimate part in a healthy debate and their voices should not be restricted,” Mijatovic said.

In the current climate, the open letter in support of and signed by people of different ethnicities is a small step forward. Signatory Asim Mujkic, a professor at the faculty of political sciences at the University of Sarajevo, said the cases were a call to action.

“My initial motive was to protest against the mainstream hegemonic ideological view that aggressively imposes itself upon independent and free-thinking intellectuals and public workers that, in the context of Bosnia and Herzegovina, usually targets vulnerable ethnicities for the purpose of its political mobilization,” Mujkic told Index on Censorship.“We need to fire back, especially in such circumstances.”