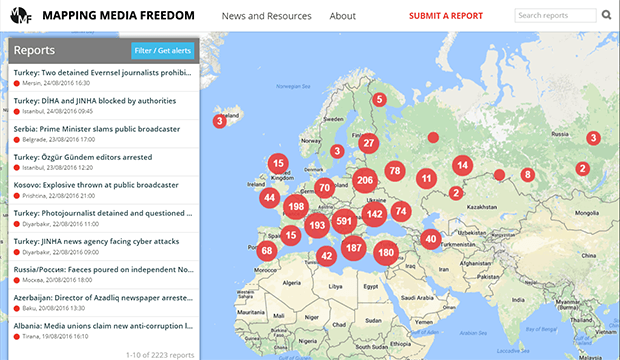 The armed conflict between the Russian Federation and Ukraine, the occupation of Crimea and Russian support for separatists in Donbas have lead to a large-scale media war, Mapping Media Freedom correspondent Tetiana Pechonchyk writes.

Faced with Russian propaganda, which attempts to stir up hatred, Ukraine imposed a number of restrictions in the media to protect its national security and territorial integrity against its aggressive neighbor. Those restrictions have manifested themselves  at different levels and in different ways and touched not only on the Russian media and journalists but also Ukrainian media workers and bloggers who have been accused of being too sympathetic to Russia. In some cases the restrictions have been disproportionate, they have narrowed the space for criticism in Ukraine amid an armed conflict that began in 2014.

The most well-known example is the case of Ruslan Kotsaba, a Ukrainian journalist and blogger, who was arrested in February 2015 for posting a video criticising the country’s military recruitment campaign and called on Ukrainians to boycott it. A month later, on 31 March, Kotsaba was accused of “treason” and obstructing “the legitimate activities of the armed forces of Ukraine”.

After nearly a year and a half in detention — during which Amnesty International named him a “prisoner of conscience” — Kotsaba was acquitted of the charges by the Ivano-Frankivsk court of appeal.

In a second case, Olena Drubych a journalist working for municipally owned Kharkovskie Izvestiya, was fired in March 2016 for republishing material from the Russian website Expert Online, which reported “the Russians celebrated the second anniversary of Crimea returning to the Russian Federation”.

In September 2015, Katerina Voronina, a journalist for Russian TV channel NTV was detained along with her driver by representatives of the Right Sector, a far-right Ukrainian nationalist political party, near the administrative border between occupied Crimea. NTV said that the journalist was reporting about a blockade on goods going into Crimea, and was on Ukrainian territory legally. According to the Right Sector website, Voronina, who was questioned for three hours, was filming Ukrainian soldiers. Voronina was then transferred to the Ukrainian State Security Service where she was interrogated for six more hours before being released the following morning.

In April 2016 a film crew from Russian TV channel Mir-24 was denied entry to Ukraine at the Belarusian border by Vystupovychi crossing point border guards. The journalists were planning to visit the abandoned city of Pripyat to report on the anniversary of the Chernobyl nuclear disaster. According to border guards, the four correspondents, who were Belarusian citizens, did not have any permits or other documents confirming the objective of their visit.

As Index on Censorship reported in May, the Ukrainian website Myrotvorets, which publishes the personal data of those it believes to support separatism in eastern Ukraine, posted the identities of over 4,000 journalists accredited by the self-proclaimed Donetsk People’s Republic. Among those named were correspondents working for the BBC, Reuters, AFP, The Independent, Ceska televize, CNN, Al Jazeera, Liberation, ITAR-Tass and RT. Following the release, the site was criticised and announced it was shutting down, but was back online by 19 May.

Ukrainian authorities launched a criminal investigation but observers have little hope of an objective investigation. The website is openly supported by Ukraine’s interior minister, Arsen Avakov and his advisor MP Anton Herashchenko.

Following the initial post on 7 May, Myrotvorets released a second, larger list on 20 May, which contained 5,412 names including 2,082 Russian and 1,816 international journalists. The site has subsequently registered with Ukrainian authorities as a media outlet.

In 2016, Ukraine’s ranking in Reporters Without Borders press freedom index climbed 22 places to 107th out of 180 countries. According to Freedom House’s world press freedom index, Ukraine is a partially free country, up 11 places over 2015.

This article was updated on 2 September 2016 to provide context and clarification to the nature of the media environment between Russia and Ukraine.