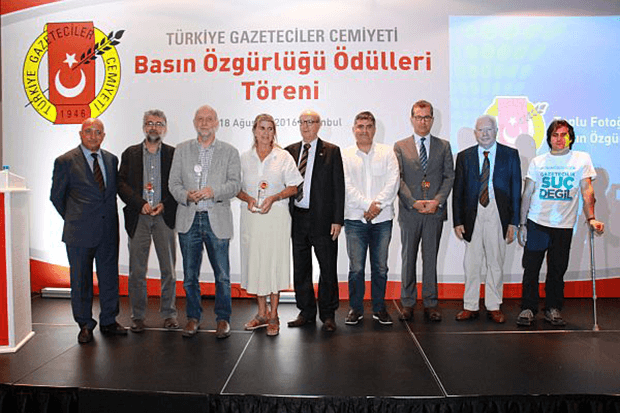 The awards were presented at a ceremony on Thursday 18 August. (Photo: TGC)

The Journalists Association of Turkey (TGC) on Thursday gave a 2016 Press Freedom Award to a coalition of international organisations, including Index on Censorship, that have worked in concert since last year to support journalists in the country and fight an ongoing deterioration in the state of press freedom.

“Press freedom cannot be taken for granted in any country and requires us to be constantly vigilant. As the post-coup crackdown continues, Index’s project Mapping Media Freedom is registering threats to the media, as well as publishing work from censored journalists, to help bring international attention to the issues. Index is grateful to be recognised for its work on behalf of the journalists of Turkey,” Rachael Jolley, deputy chief executive of Index on Censorship said.

The TGC award recognised the group of press freedom and free expression defenders, which came together as pressure on media increased ahead of the country’s second parliamentary election in 2015, for its collective efforts to bring awareness of press freedom violations in Turkey to the world at large and for supporting journalists of Turkey.

The group was assembled by the International Press Institute, which organised a press freedom mission to Turkey in October 2015.

Noting the importance of international solidarity in support of Turkey’s journalists, he said that collective action is increasingly key, as pressure on independent media continues to increase under emergency rule declared in the wake of the failed July 15 coup.

The full text of Gürsel’s remarks appear below.

Last year, Turkey provoked the creation of something that was the first of its kind in the world.

Almost all international press freedom organisations came together in order to form a coalition to defend the right of journalists in this country to perform their profession freely; a reaction to the political power having increased its repression of the freedom of the press to unprecedented levels in between the two elections.

The highly representative joint emergency press freedom mission of eight international organisations to Turkey on 19 to 21 October 2015 was the first of its kind in the world.

IPI’s Turkish National Committee and the Union of Journalists of Turkey, a member of the EFJ, endorsed the mission.

Showing solidarity with journalists in Turkey and underlining the fact in Turkey and abroad that growing pressure on independent media would jeopardise free and fair elections in the country – and of course demanding an immediate end to this pressure – were among the objectives of the mission.

The facts collected on the state of the freedom of the press in Turkey were shared with the world in a mission report published on Oct. 31, 2015. Suggestions were also made to make the situation better.

Despite its ad-hoc character, the coalition of international press freedom organisations for Turkey continued its activities with the participation of additional organisations.

The coalition coordinated the call of 50 leading editors around the world who on Oct. 30, 2015 urged President Erdogan to protect press freedom in Turkey.

It made a joint statement for the release of Cumhuriyet journalists Can Dündar and Erdem Gül, on Dec. 1, 2015.

The coalition made a joint statement to support a mission by RSF to Istanbul with the same purpose.

Representatives of organisations forming the coalition on Jan. 26, 2016 repeated their call for the release of Can Dündar and Erdem Gül at the gates of Silivri prison in Istanbul where the two journalists were held.

The coalition called on Turkey to drop all charges against the Cumhuriyet journalists on March 24, a day before their politically motivated trial.

Coalition members have also been active in submitting alerts to the Council of Europe’s platform to promote the protection of journalism and safety of journalists.

I’m standing here today on behalf of the coalition of international press freedom organisations for Turkey to receive this year’s Press Freedom Award of the Journalists Association of Turkey on the category of Institutions, given to the coalition.

On this occasion, I would like to mention names of member organisations of the coalition:

On behalf of the member organisations, I extend our sincerest gratitude and thanks to the Journalists Association of Turkey for their decision to grant this year’s press freedom award to the coalition.

This award is very meaningful for us because it shows that the international solidarity made for the freedom and future of journalism is fairly evaluated and appreciated.

As facts have shown, the international solidarity of journalists has always been effective and a deterrent to repressive regimes that put media under pressure in order to prevent the public from being informed freely and objectively.

International solidarity is becoming more important these days; the repression of journalists and the media is gaining a destructive character with the unlawfulness of the emergency rule, insofar as the failed coup of July 15 has been used as a pretext for its implementation.

In consciousness of this fact, we are very thankful to the honourable jury members for granting us this award.

Full details of the awards are available are here.

Index will be exploring the situation in Turkey in a series of upcoming events:

12 Sept: Turkey beyond the headlines

Acclaimed writer Kaya Genç will talk to Rachael Jolley, editor of Index on Censorship magazine, about his forthcoming book Under the Shadow: Rage and Revolution in Modern Turkey.

15 Sept: The State of Turkey with Kaya Genç, Ece Temelkuran and Daniel Trilling

Join Index on Censorship magazine’s contributing editor Kaya Genç and fellow Turkish writer Ece Temelkuran for a discussion about the state of Turkey in the aftermath of the failed military coup.

20 Sept: Author Ece Temelkuran on the struggles that have shaped Turkey

Join Index on Censorship’s CEO Jodie Ginsberg as she presents an evening with award-winning journalist and novelist Ece Temelkuran to discuss her latest book Turkey: The Insane and the Melancholy.