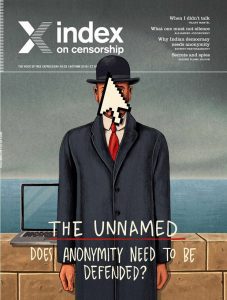 Anonymity is out of fashion. There are plenty of critics who want it banned on social media. It’s part of a harmful armoury of abuse, they argue.

Certainly, social media use seems to be doing its best to feed this argument. There are those anonymous trolls who sent vile verbal attacks to writers such as US author Lindy West. She was confronted by someone who actually set up a fake Twitter account under the name of her dead father.

Anonymity has been used in other ways by the unscrupulous. Earlier this year, a free messaging app called Kik was the method two young men used to get in touch with a 13-year-old girl, with whom they made friends online and then invited her to meet. They were later charged with her murder. Participants who use Kik to chat do not have to register their real names or phone numbers, according to a report on the court case in the New York Times, which cited other current cases linked to Kik activity including using it to send child pornography.

So why do we need anonymity?  Why does it matter? Why don’t we just ban it or make it illegal if it can be used for all these harmful purposes? Anonymity is an integral part of our freedom of expression. For many people it is a valuable way of allowing them to speak. It protects from danger, and it allows those who wouldn’t be able to speak or write to get the words out.

“If anonymity wasn’t allowed any more, then I wouldn’t use social media,” a 14-year-old told me over the kitchen table a few weeks ago. He uses forums on the website Reddit to have debates about politics and religion, where he wants to express his view “without people underestimating my age”.

Anonymity to this teenager is something that works for him; lets him operate in discussions where he wants to try out his arguments and gain experience in debates. Anonymity means no one judges who he is or his right to join in.

For others, using a fake or pen name adds a different layer of security.  Writers for this magazine worry about their personal safety and sometimes ask for their names not to be carried on articles they write.  In the current issue, an activist who works helping people find ways around China’s great internet wall is one of our authors who can’t divulge his name because of the work he does.

Throughout history journalists have worked with sources who want to see important information exposed, but do not want their own identity to be made public. Look at the Watergate exposé or the Boston Globe investigation into child sex abuse by priests. Anonymous sources can provide essential evidence that helps keep an investigation on track.

That right, to keep sources private, has been the source of court actions against journalists through the years. And those who choose to work with journalists, often rely on that long held practice.

Pen names, pseudonyms, fake identities have all have been used for admirable and understandable purposes over the centuries: to protect someone’s life; to blow a whistle on a crime; for a woman to get published at a period when only men did so, and on and on. Those who fought for democracy, the right to protest  and other rights, often had operate under the wire, out of the searching eyes of those who sought to stop them. Thomas Paine, who wrote the famous pamphlet Common Sense “Addressed to Inhabitants of America”, advocating the independence of the 13 states from Britain, first published his words in 1776 anonymously.

From the early days of Index on Censorship, when writing was being smuggled across borders and out of authoritarian countries, the need for anonymity was paramount.

Over the years it has been argued that anonymity is a vital component in the machinery of freedom of expression. In the USA, the American Civil Liberties Union argues that anonymity is a First Amendment right, given in the Constitution. As far back as 1996, a legal case was taken in Georgia, USA, to restrict users from using pseudonyms on the internet.

Today, in India, the world’s largest democracy, there are discussions about making anonymity unlawful. Our article by lawyer and writer Suhrith Parthasarathy considers why if minister Maneka Gandhi does go ahead with plans to remove anonymity on Twitter it could have ramifications for other forms of writing. As Anja Kovacs of the Internet Democracy Project told Index, “democracy virtually demands anonymity. It’s crucial for both the protection of privacy rights and the right to freedom of expression”.

We must make sure that new systems aimed at tackling crime do not relinquish our right to anonymity. Anonymity matters, let’s remember it has a role to play.

Order your full-colour print copy of our anonymity magazine special here, or take out a digital subscription from anywhere in the world via Exact Editions (just £18* for the year). Each magazine sale helps Index on Censorship fight for free expression worldwide.

Copies will be available at the BFI, the Serpentine Gallery, MagCulture, (London), News from Nowhere (Liverpool), Home (Manchester), Carlton Books (Glasgow) and on Amazon. Each magazine sale helps Index on Censorship continue its fight for free expression worldwide.

The full contents of the magazine can be read here.

If the US’s internet freedom agenda is going to be effective, it must start by supporting grassroots activists on their own terms, says Ivan Sigal.

Attacked by the government and the populist press alike, political bloggers and Twitter users in Greece struggle to make their voices heard.

Whitney Phillips reports on a loose community of anarchic and anonymous people is testing the limits of free speech on the internet.