TURKEY UNCENSORED
Can Dündar: “We have your wife. Come back or she’s gone”

Dilek Dundar, the wife of prominent journalist and former editor-in-chief of Cumhuriyet newspaper, Can Dundar was prevented from leaving Turkey 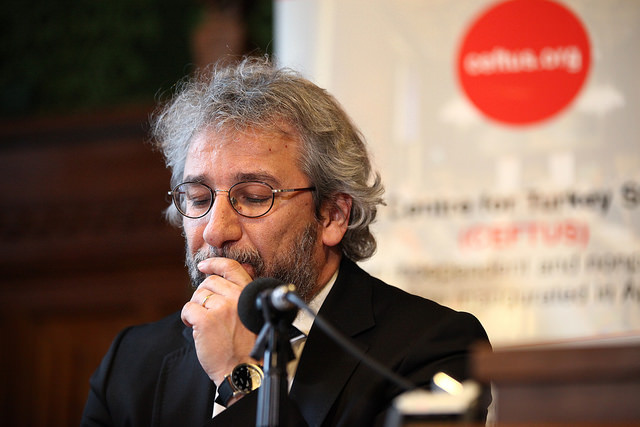 In mobster movies the bad guys always kidnap the wife of the protagonist. They’ll phone the husband to say: “We have your wife. Do as we tell you otherwise she’s gone.”

I had not imagined that a state could become no better than a criminal syndicate. But the Turkish state has become one.

On Saturday 3 September my wife’s passport was confiscated by the police at the airport as she was en route to Berlin. She was not accused of anything criminal. She was not being searched for or tried and had no obstacles preventing her from travelling abroad. There was no legitimate reason to prevent her journey and no explanation has been given.

It is with me that they had an issue. I had broadcast footage of Turkish state intelligence smuggling arms into a neighbouring country by illegal means. They could not deny it and say: “No such thing has happened.” What they said was: “This is a state secret.”

For uncovering the state’s dirty secrets, I was given five years and ten months in prison. We had appealed the conviction to a higher court but after the coup attempt a state of emergency was declared and the rule of the law was completely suspended.

To expect justice to be served by a judiciary under the complete control of the government would have been as naive as expecting mercy from the “mob”.

I went abroad and said that I would not return until the state of emergency was lifted and the rule of the law was restored.

Then the mob took my wife hostage. We are not the only people to face such relentlessness.

The 64-year-old mother-in-law of one of the supposed coup plotters was taken to a prison in a wheelchair. The father of another accused, who was not caught, was taken into custody as he left prayer in a mosque. The passports of wives and daughters have been confiscated and hundreds of families have been forcefully separated without trial.

These are direct violations of the principle of individual responsibility for crime.

Guilt by association allows such mob-like lawlessness prevails in a country that is a member of the Council of Europe.

It was the present government that brought the coup plotters who tried to overthrow it into the state, tasked them with cleansing its opponents and made a giant out of them.

When they had a dispute over distribution of spoils and dissolved their partnership, there remained within the state a well rooted and gargantuan parallel organisation.

Then the conflict peaked on July 15 when Frankenstein’s monster attacked its creator.

The violent coup attempt was put down because the military headquarters did not lend it support and the people took to the streets. But Erdogan has treated the event — in his own words — as “a godsend”. Using the tactics used by US senator Joseph McCarthy in the 1950s, he has started a witch hunt that will incarcerate all opposition.

More than 40,000 people have been taken into custody while 80,000 civil servants have been removed from their duties. Dozens of journalists have been arrested. Nearly 100 media outlets have been shut down.

Yet the rage of the government has not been quelled. Now it is taking it out on the relatives of those “witches” it did not catch.

It says: “We have your wife. Come back or she’s gone.”

But we all know that at the end of the movie the bad guys are defeated, the hostages are freed and families are reunited.

I have no doubt that this is what will happen in Turkey. Those who have made a mob out of the state will be tried. Families will get back together and celebrate the end of the witch hunt and the return of freedom, democracy and justice.

We are well aware of this and we labour to make that day come true.

Can Dündar: Turkey is “the biggest prison for journalists in the world”

2 responses to “Can Dündar: “We have your wife. Come back or she’s gone””