PRESS RELEASE
Bahrain: Parliamentary pressure mounts on Theresa May to call for Nabeel Rajab's release
14 Dec 2016
BY INDEX ON CENSORSHIP 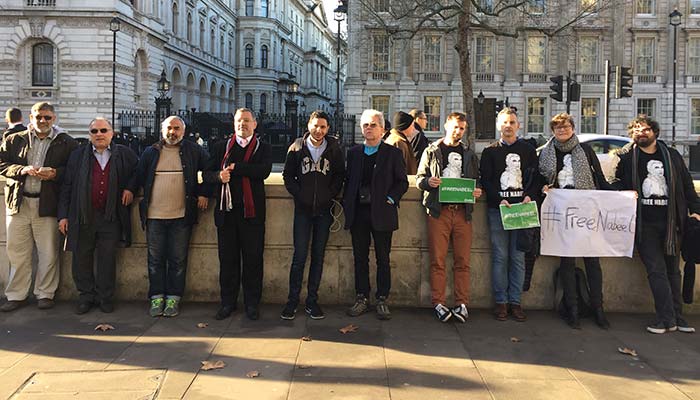 Protesters from Bahrain Institute for Rights and Democracy, Index on Censorship and English Pen called for Nabeel Rajab’s release outside 10 Downing Street.

Parliamentarians today joined in calling on the UK government to call for the release of jailed activist Nabeel Rajab.

Twenty-three Members of Parliament have penned a joint letter to the Foreign Secretary calling on the UK government to demand the “unconditional release” of Nabeel Rajab from prison, and for the charges against him to be dropped.

The letter  signed by a cross-party group of MPs from the Conservatives, Labour, Scottish National Party, DUP, Liberal Democrats, Green and SDLP, urges the UK Government to follow the lead of the US State Department, the European Parliament, and the United Nations, in calling for Bahrain to release Mr Rajab.

The letter said: “We urge you, in advance of the trial tomorrow, to make it clear to Bahraini officials that the United Kingdom wishes to see his unconditional release from prison, and for the charges brought against him, which are related to his right to freedom of expression and freedom of speech, to be dropped.”

Margaret Ferrier, a Scottish MP who chairs Westminster’s All-Party Parliamentary Group on Democracy and Human Rights in the Gulf, commented:

“This is a matter of freedom of speech and expression. Nabeel Rajab is highly-regarded as a prominent human rights activist, and these charges are little more than an attempt by Bahraini authorities to silence a dissenting voice. I find it concerning that Mr Rajab is facing such a lengthy prison sentence, particularly given that his health has already begun to deteriorate as a result of the time he has spent behind bars already. The Foreign Office has given assurances that they have repeatedly raised Mr Rajab’s case with Bahraini officials, and whilst this is welcome, we are calling for it to go one step further and urge its key Gulf ally to release him unconditionally and to drop all charges.”

Their calls are echoed by Tom Brake, Foreign Affairs Spokesman for the Liberal Democrats. He said: “With Nabeel’s trial imminent, now is the right time for the UK government to call openly and loudly for his immediate release. Anything less will be spineless and destroy the UK Government’s credibility globally on human rights.”

Also today, rights groups including Index on Censorship and the Bahrain Institute for Rights and Democracy protested outside Downing Street and delivering a letter to the Prime Minister.

Theresa May was in Bahrain last week to set out her new “bold vision” for British-Gulf relations. Human rights was not mentioned in her speech to Gulf leaders, nor by Foreign Secretary Boris Johnson, who was also in Bahrain for a separate security conference.

The Bahrain Institute for Rights and Democracy and Index on Censorship, along with three NGOs also wrote a letter to the Prime Minister: “There is nothing bold in silence over clear human rights violations, and we urge you to now make a public call for Nabeel Rajab’s immediate and unconditional release.”

Sayed Ahmed Alwadaei, Director of Advocacy, Bahrain Institute for Rights and Democracy: “We have seen how Theresa May lashed Boris Johnsons over his comments on Saudi. Nabeel Rajab criticised Saudi Arabia and Bahrain over their bombardment in Yemen and is facing prison for it. If May or her government fail to publicly call for Nabeel’s Rajab release, Bahrain will take it as a green light for their repression.”

Nabeel Rajab is facing up to 15 years in prison on charges related to his Twitter activity. He faces an additional one year charge following a letter he wrote to the New York Times. He has been held in pre trial detention since June 2016. His next court date is tomorrow, 15 December.