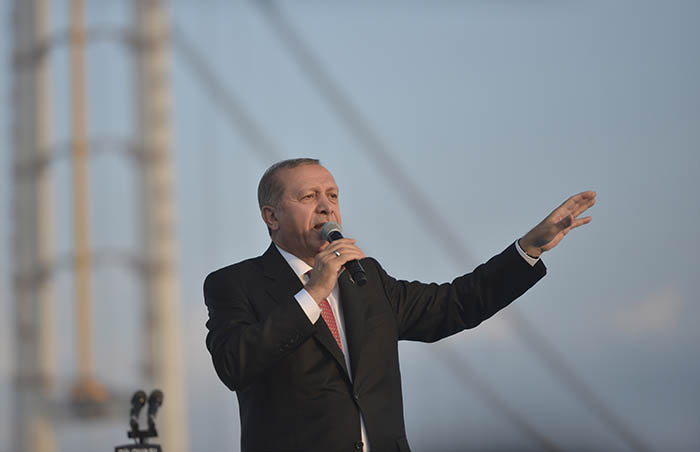 It took me three tries to watch the video, which has since been removed from YouTube by the user. The first pass was simply because it was one of the most popular videos during the latest war of words Europe-Turkey crisis. On the second pass, I got over my initial disgust and watched it fully. The third pass allowed me to step back and think about the question of how its creator is part of a social phenomenon.

In the video, a Turkish man of about 25 or so with an Islamic beard is phoning the Dutch police while proudly telling the viewer what he is up to with a wicked smile. As soon as the call is answered, he begins speaking in Turkish while in the background a friend blares an Ottoman war march from another smartphone. He tells the police: “Get your grannies ready! Because our grandfathers are coming for them!” He does not use the F word. He doesn’t need to. His obscene smile makes that clear.

This man is a fellow citizen of Turkey. As an educated Turk, I am supposed to understand him, even respect him and his point of view. Otherwise I would be categorised as part of the “oppressive, arrogant elite”. He, on the other hand, has no such responsibility. He just is. He’s free to carry on in his chauvinist bubble secure in the righteousness of his cause.

Soon the world might be full of such men and women, who are proud to be vulgar and carrying unleashed banality as a political identity. All over the globe, these individuals claim to be “real people”. If they are the “real”, then anyone who is astonished by their inane antics of this reality show is “unreal”.

Unfortunately, these “real people” like the men in the video have been the social and psychological stronghold of Turkey’s government and President Recep Tayyip Erdogan. They are also the leading actors in the Europe-Turkey crisis playing out on the streets of the continent’s cities. They have become internationally visible due to the demonstrations in The Netherlands and elsewhere. A European citizen who sees such videos and such people may think that these “real people” represent all Turks. They do not.

As a matter of fact, these people simply were not. They did not exist. They were manufactured during the AKP’s time in power. It is as if the concept of shame has been removed from the social lexicon. This loosening of morals has allowed these individuals to become the dominant figures and even role models in society. As the AKP and Erdogan evolved to become borderless, so did their followers.

When the AKP was vying to come to power in 2002, I went on an election tour to meet this new brand of conservative. It was a new social movement — a movement of the righteous, if you will — being born before our eyes. I met local representatives of the party who were usually the most respected figures in their town or neighbourhood. Each of them was exceedingly polite, presentable and moderate in their conservative lifestyle. Although the conventional wisdom had it that these new kids on the block couldn’t possibly pull off an election win, some of us were aware that there was something new in the air and that the political scene would never be the same. Abdullah Gül, an AKP founder and former president was the balanced and well-educated figure who described this young force by saying: “We are the WASPs of Turkey.”

And then it happened. The AKP wasp won the election in a landslide. In my column written after Erdogan’s first, unexpected victory, I wrote:

“Erdogan somehow magically made himself be seen as the underdog and managed to identify himself with the masses. Throughout the election period, he made himself look like he was never allowed to speak by the old guards of the secular regime, which made the voters suffer for and with him. Now he is the winner and we will see for how long he will be able to sustain the role of ‘the sole oppressed’. And we also will have to think what the political answer could be to this spectacle of the fabricated oppressed.”

The column was printed in November 2002. Since then Turkey’s political opposition has struggled to formulate a response to Erdogan’s “underdog politics”. Now he’s playing it on an international stage with much higher stakes.

So if Europeans or Americans are wondering whether or not the argument of the “oppressed and neglected real people are coming to power” farce is sustainable, the answer is it sustained in Turkey for 15 years and still there is no light at the end of the tunnel. For the last fifteen years rebranding the lumpenproletariat as “the real people” in Turkey first legitimised, then exhilarated and finally sanctified all the eccentricities, banality and the ultimate vulgar and now all Europe is watching the spectacle of this fabricated mass. Meanwhile Erdogan, who still is “the man who is not allowed to speak”, is giving endless speeches about how he and his people are silenced.

During the first half of these 15 years, one of the most popular stories circulating on Facebook was about that old cliché: boiling the frog slowly. Before the Turkish and Kurdish opposition were deep fried in prison cells, Erdogan was excelling in making different and sometimes opposite sectors of the social and political spectrum believe that he was actually their man in Ankara. The Kurds fell for it. The liberal democrats fell for it. Some feminists and some LGBT people did as well, not to mention the conservative nouveau riche and radical Islamists.

However, on the day that his second term began in 2007, he was already very clearly hinting at what he would do. In his victory speech on the election night, he said: “All those who did not vote for us are also the colours of this country.” Somehow many intellectuals saw this as an “all-embracing” speech. But I wasn’t. My article on that day infuriated many. From my point of view, Erdogan was making people like me “the embellishment on the plate that could be removed if not wanted”. Somehow, as with the USA today, the masses have a tendency to woolgathering, to think that things cannot be that bad even when the leaders make it crystal clear they actually will be. Yes, that wall could really happen. What’s worse, children could have teachers loyal to Trump’s doctrine, Americans could be glued to Trump TV and neighbours could turn on neighbours for disloyalty.

A country’s leadership sets the tone, but can also penetrate the very fabric of the public’s existence, igniting a metamorphosis that creates political clones. Power doesn’t just stun people but also hypnotises them into becoming little creatures at the command of the leader.

So now I am watching a video produced by my fellow citizen, a Frankenstein monster, who thinks that the idea of our Ottoman grandfathers raping European grandmothers is not only amusing but also a way to educate infidel Westerners. He was just about 10 when the AKP came to power. He grew up imbibing the belief that he could do anything if portrayed himself as the underdog. He thinks that educated people are evil because it has been drilled into his little mind by the political machine. He has been ruthlessly force-fed Turkey’s rewritten history, which is a bizarre combination of the greatness of our illustrious ancestors and how the secular elite paired with Westerners to steal Turkey’s greatness through devilish tricks. He believes that if one man rules the country all the confusion will be gone, Turkey will be great again and everything will be awesome.

Today I wonder what happened to those polite and proper AKP representatives I met in 2002. But more importantly what will happen to these newly fabricated people if — and when — Erdogan is gone? What will happen to these creatures after their creator has left the scene? Will some future leader be trolling through video channels to hunt them down?

About Latest Posts Ece TemelkuranEce Temelkuran is a Turkish author and political commentator whose books include Turkey: The Insane and the Melancholy and Women Who Blow On Knots. Latest posts by Ece Temelkuran (see all) Ece Temelkuran: What will become of Erdogan’s little clones when he’s gone? – 16 March Learn from Turkey: Resistance can’t […]

Read more
Ece Temelkuran
Ece Temelkuran is a Turkish author and political commentator whose books include Turkey: The Insane and the Melancholy and Women Who Blow On Knots.
Latest posts by Ece Temelkuran (see all)