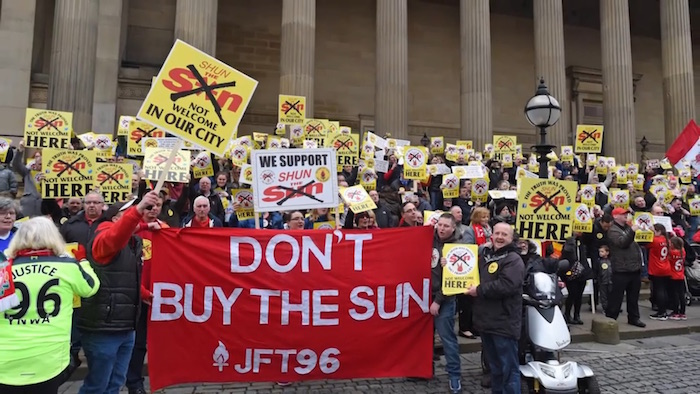 Supporters of Shun the S*n during a demonstration in Liverpool City Centre in February 2017. Credit: Shun the S*n

On 26 April 2016, the people of Liverpool got the moment they had been fighting for nearly three decades, as the jury at an independent inquest found that fans of Liverpool Football Club were in no way to blame for the 1989 Hillsborough stadium disaster in which 96 died.

After two years in court, the inquest revealed that South Yorkshire Police had failed to responsibly manage the crowd of 54,000, as the then all-standing stadium in Sheffield filled up for an FA Cup semi-final between Liverpool and Nottingham Forest, resulting in a crush in one end of the stadium. Among the dead were dozens of children and teenagers. The new inquest found that the police had then deliberately attempted to shift blame onto the fans, covering up their mistakes and claiming the deaths had been caused by drunken misbehaviour.

For 27 years the Hillsborough Justice Campaign, composed largely of families of the victims, rejected the official version of events, and “Justice for the 96” became a rallying cry for the whole city.

But one year on from the exonerating inquest verdict, a parallel campaign has only gathered momentum. Though rarely as centralised as the HJC, its message is simple: “Don’t Buy The Sun”.

On 19 April 1989, four days after the disaster, The Sun splashed its front page with the now infamous headline “The Truth”, under which it accused that Liverpool fans at the stadium had picked the pockets of the dead, beaten up a police officer attempting to resuscitate a victim, and even “urinated on the brave cops”. Later revealed to be part of a concerted smear campaign, this was taken as a deeply hurtful insult not just to the dead, but to the entire city of Liverpool, and a three-decade boycott against the UK’s highest-selling newspaper began.

The boycott became a unifying cause for the city. Most newsagents refused to continue selling The Sun, leaving only supermarket chains to display it on less visible shelves. Fans share videos on social media mischievously throwing copies they do find into the trash or covering them up with other papers. Footballers from Liverpool and their local rivals Everton are applauded for refusing to engage with its journalists, even long after they have moved on to other teams. Even its name is treated as a dirty word, with the Liverpool Echo newspaper and several campaign groups referring to it as “The S*n”, and locals calling it “the rag”.

In 2017, with the real truth now finally out in the open, the movement is more active than ever. Taxis roam Liverpool freshly wrapped in liveries declaring “The S*n – Not Welcome In Our City”. In February Liverpool Football Club revoked The Sun’s press credentials from all club facilities and activities, including home games at their Anfield stadium, effectively banning them.

One newsagent, who gave his name as Manoz, recently moved to Liverpool from London and set up shop, unaware of the history of the boycott. He decided to stop selling The Sun in February after receiving complaints from customers.

“We don’t want to hurt their feelings or anything,” he told Index. “I know it’s a long time ago but the people here are not forgetting about it. They were coming in and saying why, and that’s why we stopped it. It’s part of living in this city.”

Gary Gaze is the founder of the largest anti-Sun campaign group on Merseyside, Shun the S*n. An avid follower of Liverpool FC for most of his life, the 1989 FA Cup semi-final was the only away game he missed that season. Amidst the modern panic over so-called “fake news”, Gaze is certain that The Sun’s misleading Hillsborough coverage had long-term material effects, making the HJC’s task more difficult by turning public opinion against the victims.

“I’ve got an open mind, I know some people don’t like football or whatever, but it’s not all about football. It’s about people from Liverpool being tarred with a brush,” he told Index. “They were lies, and people have been affected by it for a long, long time.”

On asking newsagents to stop selling The Sun, Gaze, who was inspired to become an activist by the determination of the HJC’s fight for the truth, said: “We just have to educate people and let them know why people don’t read it, and I think people realise that if they continue to sell it, it’s going to affect their profits. People aren’t going to want to go into shops that sell it.”

This article is part of an ongoing series exploring media freedom in the UK.

Index on Censorship monitors media freedom around the world. Find out more.

New developments during the weekend of the disaster’s 28th anniversary saw Kelvin MacKenzie, the editor who oversaw The Sun’s Hillsborough coverage, make new derogatory comments about the city in his column in the newspaper, also comparing Everton player Ross Barkley to a gorilla after he was punched in an unprovoked attack in a nightclub. The club responded by following their neighbours in banning The Sun from all club premises and Liverpool mayor Joe Anderson reported MacKenzie to the police over what he called “racial slurs” and hate speech, on account of Barkley’s Nigerian heritage. Responding to the outrage, The Sun suspended MacKenzie.

The day before The Sun published MacKenzie’s comments, Gaze had told Index that he thought a genuine attempt by The Sun to make amends would have been received well by the city, but that they had shown their true colours through years of half-hearted apologies and omissions. After the latest controversy, he believes the boat has sailed.

“Right around the time people are remembering and mourning the 96, they do this,” he said. “It might just be bad timing but I think they know exactly what they are doing. Any apology now is sort of induced. They’ve been forced to make an apology but it’s not genuine, and it’s entirely too late.”

The most remarkable thing about recent anti-Sun activity is that it is no longer confined to Merseyside. Petitions have sprung up from football fans around the UK calling on their clubs, or even the entire Premier League, to join Liverpool and Everton’s ban in solidarity, and semi-professional club Sutton United was criticised for accepting sponsorship from The Sun’s betting platform, SunBets, for their FA Cup tie against Arsenal.

Gaze was supportive, but diplomatic, on the spread of the Don’t Buy The Sun mantra. “As far as I’m concerned people should all hate the rag. But I don’t think we’ve got a right to say to say to other cities ‘don’t buy it, don’t read it’. That’s out of our hands.” Referring to other more recent controversies such as the phone-hacking scandal, he added: “A boycott is what they deserve.”

Of course, all this talk of preventing the sale of a newspaper has led to accusations of press censorship. The Spectator’s Roger Alton wrote that Liverpool FC being allowed to ban The Sun’s reporters would have “savage implications” for freedom of the press, and claimed it was impossible to hold “even a sliver of a divergent view” of the disaster.

Locals do not care for the suggestion. Richie O’Brien, a taxi driver, wrote in an open response on Facebook: “Making stuff up and publishing pictures of semi-naked teenagers then passing it off as news is clearly not breaking any laws in this country, and it is entirely down to the individual consumer whether they buy into their poisonous drivel or not. Just as The S*n is totally within its legal rights to do and say the nasty things that it does, it is also everybody’s right to suggest that you don’t buy their product.”

However, the line between refusing to support, and refusing to allow The Sun’s presence is a point of contention. When Merseytravel, the public body that operates trains and buses on Merseyside, asked its vendors to join the boycott in September 2016, it was condemned by the Society of Editors’ Bob Satchwell who told the BBC: “No public organisation should be seeking to restrict a perfectly legitimate newspaper.” Liverpool city council unanimously voted to back the boycott, and similar council motions passed in Derry City and Strabane in Northern Ireland, and St Helens, a small town outside Liverpool.

After Liverpool FC instituted its ban in February, Trevor Hicks, president of the Hillsborough Families Support Group and father of two of the younger victims, told The Guardian of the “enormous damage” and distress caused by The Sun since 1989. The club made no statement, but on joining them in April Everton said: “the newspaper has to know that any attack on this city, either against a much-respected community or individual, is not acceptable.”

To the people of Liverpool, and a growing number of people around the UK, the movement against The Sun is symbolic of local pride, solidarity and standing up to an abusive establishment. Activists deny pressuring vendors and readers – Gary Gaze stressed that his interactions were always polite and cordial and that he preferred to support shops that joined the boycott than punish those that didn’t. He was also skeptical of politicians becoming involved.

The Sun remains the best-selling newspaper in the UK, but its near-total absence from a major city is a warning that the right to free press does not guarantee a right to a willing readership.