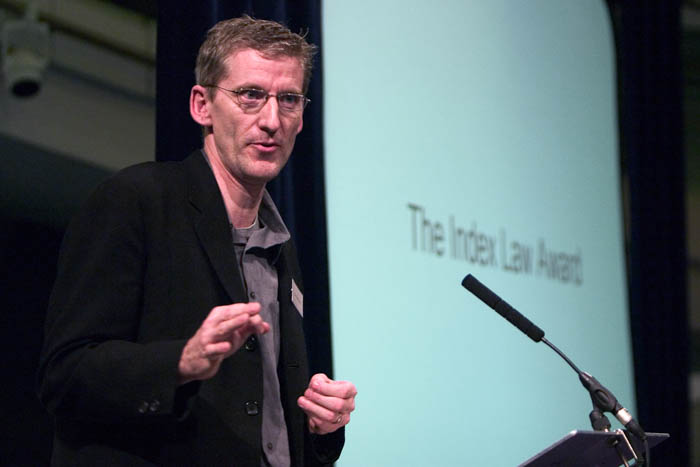 In 2005 the winners of the Index Law Award went to the Center for Constitutional Rights, a non-profit legal advocacy organisation based in New York City. Founded in 1966 by attorneys who represented civil rights movements, the CCR actively work to uphold and protect the rights of people guaranteed by the U.S. Constitution and the Universal Declaration of Human Rights.

In 2004 the CCR gained significant attention when they won a landmark case in the United States Supreme Court, allowing some detainees at Guantanamo Bay detainment camp the rights to challenge their status in courts and gain legal representation. As a result, they have continued to provide legal assistance for people imprisoned in Guantanamo and had many released who were unlawfully detained. On the frontline of social justice, Guantanamo is only one of several issues that CCR covers. From mass incarceration and government surveillance to corporate human rights abuses, CCR’s work goes beyond the courtrooms, supporting grassroots organisations that work with directly impacted communities.

One of their current cases is a federal lawsuit in which CCR is representing Sexual Minorities Uganda (SMUG), a non-profit LGBT advocacy organisation in Uganda. SMUG is suing Scott Lively, a US-based anti-gay extremist, for his active role in the persecution of LGBT people in Uganda. Lively is accused, together with the Ugandan government and religious leaders, of depriving the LGBT community of their fundamental human rights.

CCR is also dedicated to helping those who have fallen victim of discriminatory profiling, torture, and illegal detentions in the US as a result of the “war on terror”. This year, the CCR urged a federal appeals court to reinstate a lawsuit against the FBI for retaliating against Muslim American citizens who refused to become informants by placing them on the No Fly List.

Profiling of Muslims is a contentious topic following President Trump’s attempts to ban citizens from seven Muslim-majority countries from entering the US. After Trump’s second executive order in March, CCR issued a statement highlighting the dangers of state discrimination: “Trump’s hateful rhetoric has triggered a predictable spike in xenophobic and anti-Muslim acts of violence and harassment. State discrimination inevitably sends a signal of social acceptance for hate crimes and makes entire communities open targets to the nationalist rage Trump is fomenting.” CCR’s work is more important now than ever, as they continue to protect the legal rights of people, by using law and education as a positive force for social change.

Isabela Vrba Neves is a member of Index on Censorship’s Youth Advisory Board. She is a freelance writer and recent masters graduate from the London School of Economics and Political Science, where he studied Political Theory.

Isabela Vrba Neves
Isabela Vrba Neves work in communications for a mental health charity in London and is a Latin America correspondent for the International Press Foundation, a platform where young journalists get to write about stories that matter the most to them.

She is a member of Index on Censorship's youth advisory board.