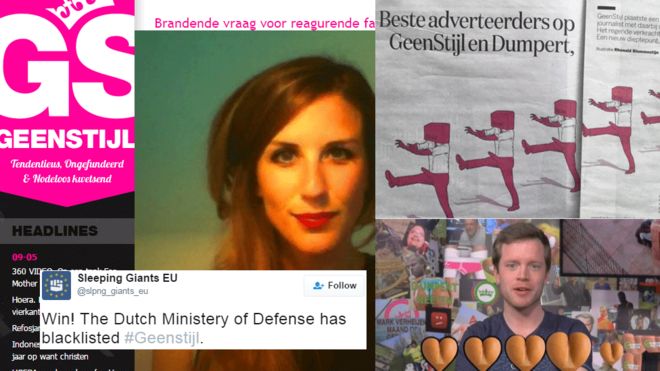 Dutch journalists launched a campaign to pressure advertisers into reconsidering advertising on sites that denigrate women.

A petition urging advertisers to withdraw their ads from provocative right-wing blog GeenStijl, shook up The Netherlands last month. About 150 women journalists and celebrities signed an open letter after a post that lead to a storm of sexual harassment and rape threats towards a female journalist. A few large companies and government institutions have so far pulled out their adverts.

The first time Loes Reijmer’s picture appeared on the front page of GeenStijl, in March 2017, she had just written a piece for her newspaper De Volkskrant about the reasons behind and the consequences of online sexual harassment of women.

In the article, she explained how blogs and social media groups are increasingly harassing women, for example by posting nude photos without their consent. She mentioned GeenStijl as the one Dutch example of a website thriving on sexist, racist and humiliating content.

GeenStijl, a popular and controversial website owned by Telegraaf Media Group, was quick to answer to Reijmer’s critical article. The next day her headshot appeared on the front page, accompanied by the text: ‘This is Loes Reijmer. Would you do her?’ A storm of sexist comments followed, including rape threats.

In April, daily NRC-columnist Rosanne Herzberger added fuel to the fire by writing a column questioning GeenStijl’s credibility. She went one step further and urged GeenStijl’s advertisers, some of the biggest companies in the country, to rethink spending their money on the site.

“The question is, which companies are making content like this possible?” Herzberger wrote. She mentioned companies like TUI travels, McDonald’s, Renault, Rabobank, Dutch theme park De Efteling and even the Dutch tax service and the Ministry of Defense.

GeenStijl has a reach of 1.2 million unique viewers per month, which makes it one of the biggest online media outlets in the country. Its videoblog Dumpert.nl has an even wider reach, 2.2 million views per month.

“Humiliating women is big business,” Herzberger stated firmly. Her column was widely spread and shared on social media, and lead to many companies to actually reconsider their advertising choices.

A couple of days later GeenStijl reposted the picture of Loes Reijmer with now the text: “Would you do her? Tell us how!”, followed by even more threatening comments by GeenStijl readers.

This is when dailies Volkskrant and NRC joined forces and published an open letter addressed to the advertisers. “Dear advertisers,” it read. “You are paying for a website where sexism and racism is the norm, not the exception.” About 150 women, from celebrities to journalists, signed the letter.

The campaign was inspired by the American organisation Sleeping Giant that keeps track of companies whose adverts appear on the alt-right website Bartbreit.

Journalists in The Netherlands are increasingly experiencing harassment and threats, a recently published investigation by the Dutch Union for Journalists (NVJ) showed. More than half (61 percent) of all (638) questioned Dutch journalists have been threatened physically or via social media at some point in their career, 22 percent even on a monthly basis. Amnesty International called the Dutch numbers “worrying”.

Volkskrant’s own ombudswoman, Annieke Kranenberg, believes it is a worrying trend. In an op-ed in De Volkskrant she stated that being a target of sexual intimidation and threats online could lead to self-censorship.

She asked several Volkskrant journalists about their experiences and many admitted they are suffering from self-censorship. “I always expect to receive negative comments, but the comments on GeenStijl are the worst, the most hateful you can get,” one journalist, who remained anonymous, told her. “The reality is that I do think twice before I write about something sensitive.”

Even the journalists that don’t have experience with self-censorship find themselves obstructed in doing their jobs. When they have been smeared by GeenStijl, they notice the articles in which they have been portrait negatively, keep coming up in the search engines. “I’m bothered by that,” one journalist said. “People Google your name before they say yes to an interview request.”

Online harassment against female journalists and women, in general, is not just a problem in The Netherlands, ombudswoman Annieke Kranenberg argued. “Worldwide it has an effect on press freedom,” she wrote. She referred to an essay by the American journalist Amanda Hess in 2014: Why women aren’t welcome on the internet. The amounts of sexist and threatening messages women receive online “are an assault on women’s careers, their psychological bandwidth, and their freedom to live online,” Hess stated.

OSCE’s media freedom spokesperson Dunja Mijatovic published a report on the topic in 2015. She concluded that female journalists are disproportionately affected by online hate speech. Mijatovic recommended that media companies themselves could play a role in changing this discourse by working on better on equality on the work floor. Media companies should also publicly stand up more against online hate speech, and they must ensure psychological and legal support for their journalists, Mijatovic argued.

GeenStijl has fired back to the open letter. They argue that dailies De Volkskrant and NRC have crossed a line by publishing such a threat and that by doing so they are themselves restricting freedom of expression.