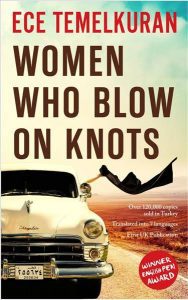 “After the failed coup attempt, the crackdown began on journalists, but we thought that writing fiction would provide a safe shelter,” she said. “Now we are seeing even the novelists are being targeted, and it makes you think there is no haven for anyone with critical thought.”

Asked whether her worries have begun to affect her own work, she paused before adding: “There is no justice in Turkey as we know it in the West. We don’t know what tweet, what thing you write could be the thing that puts you under the spotlight. The unhappiness in Turkey is so big, so palpable that you can touch it. It paralyses the human mind. Turkey does not let you do any intellectual work.”

However, Temelkuran, speaking to Index in London at an event to promote her new book The Women Who Blow on Knots, insisted that she would never allow Erdogan to force her to flee her homeland.

“The idea of leaving Turkey permanently is horrible because it deprives you of home, which I believe is inhumane. The supporters of Erdogan are constantly claiming that they are the ‘real people’ of Turkey, and I feel we have to constantly remind them that we are also real people.”

With the country heading down an authoritarian path following Erdogan’s success in a recent referendum that granted him vast new powers, Temelkuran believes Turkey faces a long road back. “It’s not easy to be hopeful, but one can be easily inspired by the people who are resisting,” she said, giving the example of two educators, Nuriye Gulmen and Semih Ozakca, who went on hunger strike in March 2017 in protest at losing their public sector jobs in the post-coup purge. Soon after Temelkuran’s interview, the pair were arrested and charged with membership of a terrorist organisation. They vowed to continue striking in prison.

The Women Who Blow on Knots tells the story of a group of women travelling through the Middle East during 2011’s Arab Spring. In conversation with author Diana Darke, Temelkuran explained that the title of her book is a reference to a passage from the Koran warning of the evil of women who performed witchcraft by blowing onto knotted rope, inverting the idea into an acknowledgement of female power.

“If our breath is so strong why not use it,” she said. “The main idea is that women blow life into things, into men, into children, into anything. They create life.”

However, in the context of a divided Turkey, she said that “it is as if there is this soundproof wall” in the middle of the country, with neither east nor west caring to learn about life on the other side. “This is something that I learned in early ages – the ones who stand in the middle get shot by both sides.”