The trial of Cumhuriyet journalists and executives resumes on 11 September. It is more than likely that some of the newspaper’s former executives will testify against them, but neither imprisonment nor backstabbing is new in Cumhuriyet’s strained existence of nearly a century 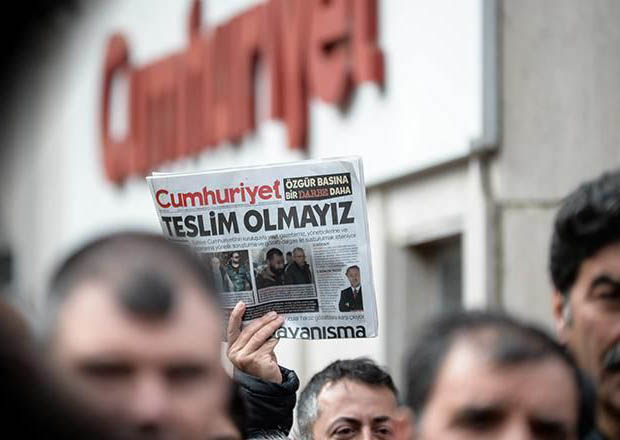 “Of course I am afraid. Only a fool wouldn’t be afraid at such a time,” said Ali Sirmen, a veteran journalist who has spent decades working at Cumhuriyet, whose writers and executives — five of whom remain imprisoned — are on trial facing terror charges.

This is not the first time journalists from Cumhuriyet have faced trial. The newspaper’s long history — it was founded in 1924 and christened by none other than the republic’s founder Mustafa Kemal Atatürk; “cumhuriyet” is the Turkish word for republic —  is one of “prisons and clampdowns” according to Cumhuriyet’s own wording. The newspaper has been shut down many times, many of its employees imprisoned and six of them were murdered over the course of its 93-year long history.

The 78-year-old Sirmen first started at Cumhuriyet in 1974 and wrote for the newspaper until 1991, when he walked with 80 other journalists in protest of the editorial line adopted by then editor-in-chief Hasan Cemal. After a seven year stint at the then-mainstream Milliyet, Sirmen returned to Cumhuriyet in 1998.

Sirmen was imprisoned both after the 12 March 1971 and 12 September 1980 military coups for his writing. He has seen both civilian and military prisons. He was eventually acquitted both times, but only after serving time in prison.

“If I had stayed 20 more days in prison in the 12 September period, I would have completed the sentence they were seeking for me,” he remembers. “The practice of pretrial detention as punishment for journalists started in those times,” Sirmen said.

According to Sirmen, trial proceedings of military eras were mostly a show, but they were still less farcical than the courtrooms of post-15 July Turkey. “They [the courts of military rule periods] at least tried to keep up appearances. They abided by established procedures; here, there is no such concern at all.”

“As someone who knows the prisons of the coup periods, I have said many times that the situation is much worse today. For example, when I was acquitted in the Madanoğlu trial [in which Sirmen was accused of supporting a failed coup in 1971] the Military Court of Cassation overruled our convictions twice in spite of pressure from the military regime. Can such a thing happen today?” he asked.

Hasan Cemal, the editor-in-chief whom Sirmen walked out on in 1991, agrees. “Cumhuriyet was shut down during both coup periods; saw immense levels of crackdowns, its writers were imprisoned many times, but not to the extent that we see today.”

Like Sirmen, Cemal agrees that the judiciary tried to act in compliance with the law despite pressure. “There was no rule of law in the 12 September period; true, but to a certain extent, there was a state that heeded laws. We don’t have that anymore.”

But Cemal doesn’t believe in comparisons. “It might be misleading comparing one grievance with another. If journalism is considered a crime in our day, if freedom of expression is being trampled under feet, if the media today has only one voice, what good would it do to compare this horrible situation with the 12 March or 12 September period?”

Although the two journalists might have locked horns in the past, both name “belief in democracy, secularism and the rule of law” as the definitive values which Cumhuriyet stands for. Both of them also agree that it is precisely why the newspaper, which is doing poorly both financially and in terms of circulation, has come under attack. Why would anyone bother to silence an apparently moribund newspaper?

“The way Cumhuriyet views secularism, democracy, the supremacy of law, freedoms and human rights; its face is turned towards the west; all of these are unacceptable for the Erdoğan mentality. Because if Cumhuriyet is the west, then Erdoğan is the east,” according to Cemal.

As of 8/9/2017, there were 522 verified violations of press freedom associated with Turkey in the Mapping Media Freedom database.

A game of thrones

The incident in which dozens of writers left Cumhuriyet en masse in protest of Cemal in 1991 was not the first episode of ideological shifts in the newspaper’s history manifested as a show-down. In fact, the newspaper is notorious for infighting, which, this time, gave the prosecutors material to base the current trial on. In fact, two reporters whose testimonies were included in the indictment still work at the newspaper and they will testify in Monday’s trial.

On 2 April 2013, the Cumhuriyet Foundation — which appoints the editor-in-chief of the newspaper — saw a change of guard: a more liberal group, as opposed to the traditionally hard-line Kemalist executives, was elected to the seats on the foundation’s executive board.  Testimony from some of the former board members are also included in the indictment, and these individuals will also testify — most likely against the defendants — in the hearings that begin on 11 September.

The new foundation team, the prosecutor says, hired columnists and allowed reporting that served the purposes of the Fethullah Gülen Network, which is referred to as a terrorist organisation by Turkish courts.

A legal battle over the foundation’s leadership is still ongoing and pro-government media has openly sided with the old guard at Cumhuriyet. That is a separate case, but Cumhuriyet being forcefully returned to its previous executives is not a far-fetched possibility.

A brief history of government pressure on Cumhuriyet

Detention and imprisonment of Cumhuriyet journalists go back a long way. In one of the notable cases in 1962, contributor Şadi Alkılıç and editor Kayhan Sağlamer were arrested and imprisoned over an article published in Cumhuriyet praising socialism. Alkılıç was acquitted in 1967 after a higher court overruled his sentence handed down over socialism propaganda.

İlhan Selçuk, one of the newspaper’s iconic names, who was also the founder of the Cumhuriyet Foundation, and the then editor-in-chief of the newspaper, Oktay Kurtböke, and several other Cumhuriyet writers were detained after the 12 March 1971 coup d’état — along with several others. Selçuk was subject to torture in prison in this period, where he and his fellow defendants were accused of supporting a failed coup attempt that would have taken place three days prior to the actual coup.

Ali Sirmen, Erdal Atabek and Ataol Behramoğlu were imprisoned by the courts of the 1982 military regime for membership of the left-wing Peace Association.

In May 2016, the newspaper’s former editor-in-chief Can Dündar and Ankara Bureau Chief Erdem Gül were arrested over a news story which suggested that the Turkish government sent weapons and ammunition to armed jihadist groups in Syria.

Outside the current case, Oğuz Güven, editor of the newspaper’s internet edition, was imprisoned for a month when for a headline cumhuriyet.com.tr used describing the accidental death of a prosecutor who led investigations into the 15 July 2016 failed coup.

The newspaper was shut down for the first time on October 29 1934 for 10 days. Then it was shuttered for 90 days in 1940 over its publications that went against the official line of the government. After the 12 March 1971 coup d’état, it was shuttered for 10 days. It was shut down twice following the September 12 1980 coup d’état in Turkey by the military junta, first over an article by İlhan Selçuk, which praised “Kemalizm” and later over a book written by the newspaper’s chief columnist and owner  Nadir Nadi.

Cumhuriyet journalists have also faced fatal attacks. Six Cumhruiyet journalists, all of whom were known for their staunch secularist views, have been killed since 1978. Columnist Server Tanilli, an Istanbul University academic, was left paralysed following an armed attack on 7 April 1978.  Cumhuriyet columnist Cavit Orhan Tütengil was assassinated on 7 December 1979 while waiting for a public bus.

The newspaper also took its share of the violence at the height of Turkey’s unsolved murders — which are commonly believed to be state sponsored– in the 1990s. Columnist Muammer Aksoy, who was also the president of the Atatürkist Thought Assassination, was shot dead while he was on his way home in Ankara in 1990. Socialist columnist Bahriye Üçok was killed by a bomb package sent to her house on 6 October 1990. Investigative journalist Uğur Mumcu was killed when a bomb placed in his car detonated on Jan. 24, 1993. Columnist Onat Kutlar died as a result of injuries sustained also in a bomb attack on 30 December 1994. Cumhuriyet’s  Ahmet Taner Kışlalı was also killed in front of his house in a bomb attack in 1999. 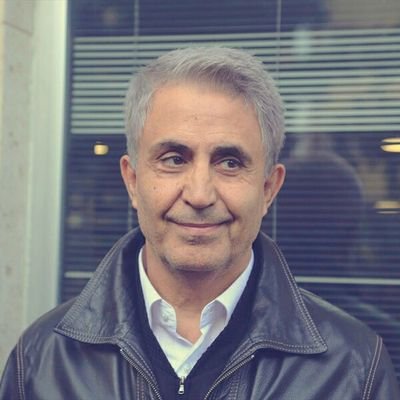 Cumhuriyet: A press freedom case degenerates into a boardroom takeover

Cumhuriyet’s administration abruptly changed after a court ruling early September. Around 30 journalists and writers (some of whom had been in jail) were either dismissed or resigned in protest of the way the new board took over the newspaper.

Guilty verdicts against the Cumhuriyet journalists and executives must be overturned 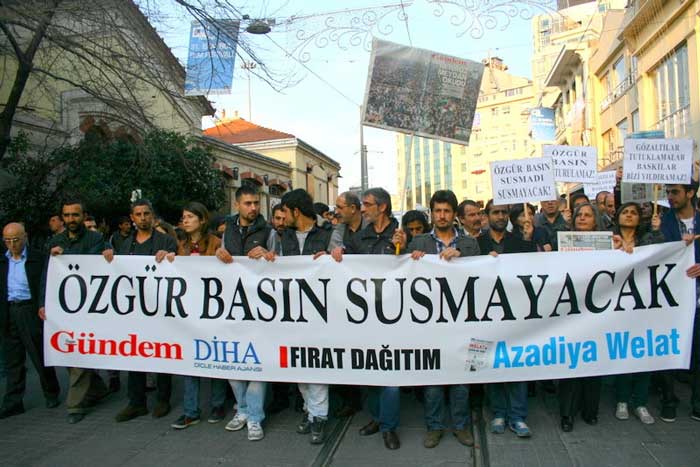 KCK press trial: “The template for all Turkey’s media trials”

Once the biggest media trial in Turkey, the KCK press trial hardly makes the news today, even though it set a grim precedent for the criminalisation of journalistic activities in the country

One response to “Cumhuriyet: A pained history of suppression, assassinations and betrayal”