LETTER
Azerbaijan: Open letter to EU ahead of Aliyev’s Brussels visit
28 Oct 2017
BY INDEX ON CENSORSHIP 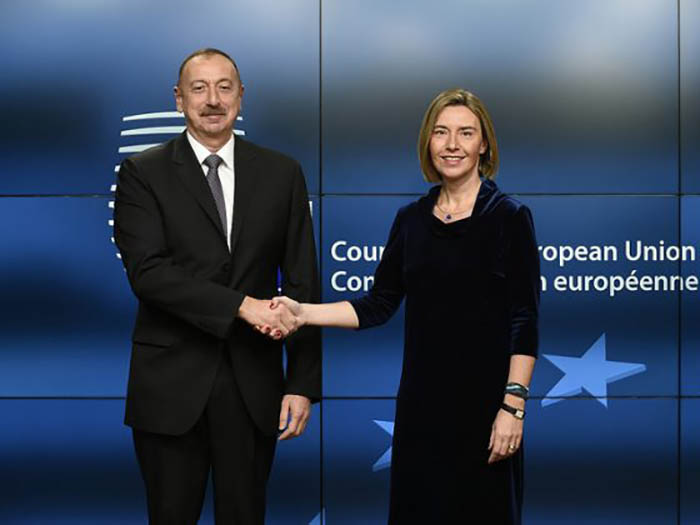 A coalition of 37 human rights NGOs has sent a letter to the EU member state heads and EU leaders ahead of Azerbaijani President Ilham Aliyev’s visit to Brussels to participate in the 5th Eastern Partnership Summit on 24 November 2017. The NGOs urge the EU member state heads and leaders to use the summit to call on president Aliyev to end the current human rights crackdown in Azerbaijan and commit to concrete steps in this regard, including the release of individuals imprisoned on politically motivated charges and reforms of repressive NGO legislation.

The letter was sent on 27 October to the heads and foreign ministers of the 28 EU member states, as well as to EU High Representative for Foreign Affairs and Security Policy Federica Mogherini, EU Commissioner for European Neighbourhood Policy and Enlargement Negotiations Johannes Hahn, EU Commission President Jean-Claude Juncker, European Council President Donald Tusk and European Parliament President Antonio Tajani. The letter (as addressed to Federica Mogherini) can be read below or downloaded here.

Subject: Human Rights in Azerbaijan on the eve of the Eastern Partnership Summit

We, the undersigned organisations, are writing ahead of Azerbaijani President Ilham Aliyev’s visit to Brussels to participate in the 5th Eastern Partnership Summit on 24 November. We urge you to use any opportunity you will have during the summit to call on president Aliyev to end the human rights crackdown and commit to concrete and sustainable human rights reforms in Azerbaijan. These include releasing individuals imprisoned on bogus, politically motivated charges; and reforming legislation that effectively prevents independent non-governmental organisations from operating and accessing funding.

Among the 20 Deliverables for the Eastern Partnership by 2020, the European Union has, notably, identified a vibrant civil society as a pre-requisite for “democratic, stable, prosperous and resilient communities and nations.”

Yet in recent years, the Azerbaijani government’s actions sharply contradict the latter and the spirit of this important Eastern Partnership commitment. Azerbaijan has adopted and enforced laws and regulations that severely restrict, rather than foster, a vibrant civil society. It has eliminated independent media, heavily filtered internet, and imprisoned and otherwise sought to silence independent journalists, civic and political activists who are essential to any kind of civil society envisaged by the Eastern Partnership.

The government’s continued crackdown on civil society and independent media has coincided with negotiations on the new, enhanced bilateral agreement between the EU and Azerbaijan. We firmly believe that the pace of those negotiations should largely depend on the progress Azerbaijan is willing to make in respect for fundamental rights.

Although in 2016 the government released 17 unjustly imprisoned human rights defenders and government critics, their convictions stand, and some face travel restrictions and are unable to do their work without undue government interference; those released on suspended sentences could also be sent back to prison. The authorities continue to use bogus, tax-related, and other politically motivated criminal charges to jail critical journalists and bloggers; at least 11 of them are currently in prison.

Azerbaijan is ranked 162nd out of 180 countries in Reporters Without Borders’ 2017 World Freedom Index. In May 2017, unidentified people abducted journalist Afgan Mukhtarli in neighbouring Georgia and illegally brought him to Azerbaijan, where the authorities pressed bogus criminal charges against him. In August, the authorities launched an investigation against Azerbaijan’s last remaining independent news agency, Turan, and a criminal case against its founder and chief editor, Mehman Aliyev, who is now under house arrest on trumped-up tax evasion and other charges. In May 2017, authorities blocked the websites of Azadliq, the newspaper of one of Azerbaijan’s main opposition parties, and of three news outlets that have to operate from abroad: Radio Free Europe/Radio Liberty (RFE/RL) Azerbaijan Service, Meydan TV, and Azerbaycan Saati. In March, a court sentenced Mehman Huseynov, the chairman of the Institute for Reporters’ Freedom and Safety (IRFS), and well-known anti-corruption blogger, to two years in prison for allegedly defaming the staff of a police station. Huseynov had publicized how several police officers arbitrarily detained and beat him, and used electric shock against him in January.

Many government critics or political opposition activists remain behind bars. Among them is Ilgar Mammadov, the leader of a pro-democracy opposition movement who in 2013 tried to run for president and who has been in prison since his arrest in early 2013 on fabricated charges of inciting violent protests. The government has ignored a judgment of the European Court of Human Rights and defied nearly a dozen resolutions by the Committee of Ministers of the Council of Europe calling for Ilgar Mammadov’s release. On 25 October, the Committee took the unprecedented decision and triggered the infringement proceedings against Azerbaijan, provided by Article 46 § 4 of the European Convention, following its failure to implement the Court’s judgment on Mammadov’s case. The proceedings could eventually lead to the Council of Europe sanctioning Azerbaijan, for example by suspending its voting rights in the Parliamentary Assembly.

Non-governmental organisations in Azerbaijan face serious obstacles to operating due to laws and regulations that require both donors and grantees to separately obtain government approval for every grant under consideration. The government has used broad discretion to deny this approval, and the authorities have convicted and imprisoned NGO leaders who failed to obtain it.

In January 2017, the Cabinet of Ministers slightly simplified the procedure by which non-governmental groups must register their funding, but this has not reduced the discretion the authorities have to arbitrarily deny funding approval.

Since 2015, Azerbaijan’s status in two international initiatives has been downgraded due to the government’s failure to meet specific commitments to foster civil society. These include suspension of Azerbaijan’s status by the Extractive Industries Transparency Initiative (EITI), which promotes revenue transparency in the gas, oil, and mining industries, and downgrading to ‘inactive’ status by the Open Government Partnership, a voluntary initiative promoting government transparency and accountability.

In October 2017, the Parliamentary Assembly of the Council of Europe adopted two strongly worded resolutions on Azerbaijan, urging the government to cease its unrelenting crackdown against critics.

At a time when the Azerbaijani government’s defiance of its civil-society commitments has prompted two standards-based organisations to downgrade Azerbaijan’s status, and has driven the Council of Europe member states to take unprecedented collective action on Azerbaijan’s blatant breach of the European Convention, the European Union appears eager to conclude a partnership agreement with the government.

The European Union is a values-based institution. While it has common interests with Azerbaijan, shared interests without shared values will not lead to a strong and reliable partnership. Instead, it is likely to lead to a situation in which Azerbaijan believes European values are negotiable. This risk is illustrated by recent investigations by the Organized Crime and Corruption Reporting Project revealing that members of Azerbaijan’s political elite were engaged in establishing and making use of a money laundering scheme and slush fund amounting to USD 2.9 billion, some of which was used to attempt to influence several European politicians to, among other things, whitewash Azerbaijan’s human rights record.

Under these circumstances, it is of the utmost importance that the EU leaders convey the message to President Aliyev that the conclusion of any new agreement between Azerbaijan and the EU, as well as the quality of the EU-Azerbaijan relationship, depends on the Azerbaijani government’s steps to address the EU’s human rights concerns. The EU would send the wrong political message to the Azerbaijani and other governments if it fails to bring meaningful political consequences for the continued detention of critics, human rights defenders and media professionals.

We urge the heads of the EU member states and the EU to abide by the obligations under article 21 of the Lisbon Treaty, as well as the commitments spelled out in the EU’s Strategic Framework for Human Rights and Democracy to “[…] promote human rights in all areas of its external action without exception”. In the most recent Foreign Affairs Council conclusions, the EU and its member states committed to “promoting stronger positions on civic freedoms and against any reduction in the space for civil society to act.”

During your meeting with President Aliyev, at the Eastern Partnership Summit, we urge you to insist on:

The Immediate and unconditional release of Ilgar Mammadov and the prompt and unconditional release of all other wrongfully imprisoned human rights defenders and civil society and political activists who were prosecuted in retaliation for their legitimate activities.
Absolute respect for free speech and media freedoms, including the prompt and unconditional release of all journalists and social media activists wrongfully put in detention; the dropping of all charges against Mehman Aliyev, and an end to the investigation against Turan.
An immediate end to the use of travel bans to arbitrarily restrict freedom of movement and professional activity, including in respect of investigative journalist Khadija Ismaiylova, human rights lawyer Intigam Aliyev, and others.
Reform of laws and regulations on nongovernmental organisations and their access to foreign funding, in accordance with the Venice Commission recommendations.
We thank you for your attention to this important matter.