TURKEY UNCENSORED
Two journalists face up to 45 years for ‘espionage’

Two journalists for the shuttered pro-Kurdish Dihaber agency are facing up to 45 years in prison on terror and espionage charges even though their reporting is the only evidence that has been presented by prosecutors. 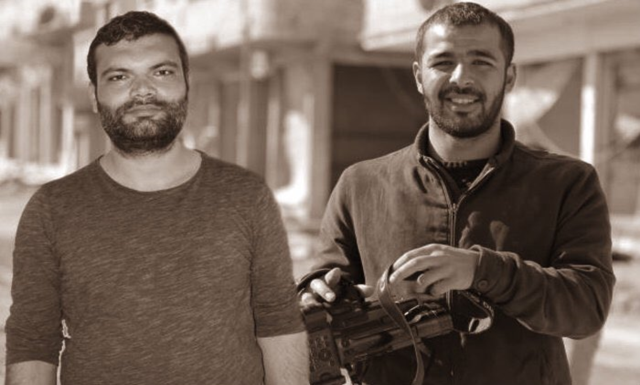 Dihaber reporters Erdoğan Alayumat (L) and Nuri Akman face up to 45 years in prison on terror and espionage charges.

All eyes turned to Erdoğan Alayumat when he appeared on the screen of the judicial teleconference system of a court in the southern province of Hatay on 2 February, beaming in from a prison 800 kilometres to the north on Turkey’s Black Sea coast. For someone facing up to 45 years in prison on terror and espionage charges, his face seemed serene and composed, his voice calm and collected.

“Had I been spying, there should be proof to show when, to whom and how I sent this information,” Alayumat told the judges of the Hatay second heavy penal court, displaying his journalistic reflex to remind the court that, like any news article, the principles of basic information shouldn’t be lacking in any indictment. It was a quick journalism 101 course to explain that his very job was the thing on trial. “I work as a journalist and report on anything I consider that has news value. I am also remunerated per piece by the agency,” he said.

Alayumat, a 30-year-old reporter working for the shuttered pro-Kurdish outlet Dicle Medya News Agency (Dihaber), was detained on July 15, 2017, alongside a younger colleague, Nuri Akman, who was assigned by the agency to spend a week shadowing Alayumat to gain experience. After spending 13 days in custody, Alayumat was arrested for “procuring confidential state documents for political or military espionage purposes” and “membership in a terrorist organization” and sent to prison, while Akman was released on probation. During the first hearing, the court ruled that Alayumat would remain in detention, and maintained the probationary restrictions on Akman until the next hearing on 25 April.

The taboo of reporting on aid to Islamists in Syria

Prosecutors in Turkey have been presenting journalistic activities as terrorism for a long time, especially since authorities began prosecuting pro-Kurdish outlets as part of the “KCK press trial.” All of the outlets targeted have been closed by successive emergency decrees following a coup attempt in July 2016. Dihaber, founded after its predecessor DİHA was closed by emergency decree in October 2016, was itself was shut down in August 2017. Their successor, Mezopotamya Agency, continues to be targeted with access bans on its website and trials against many of its journalists.

The authorities’ decision to pursue journalists as spies is based on-the-fly definitions of what facts are illicit and harmful to the “security of the state”. While working in Hatay, a multicultural province that borders conflict-ridden parts of Syria, Alayumat had been reporting on allegations that supplies were sent to Islamist groups by Turkey’s intelligence agency, the National Intelligence Organization (MİT), as well as the construction of a wall on the Syrian border. Those reports and photographs – some of which were not even taken by him but downloaded from the Internet – have been presented by prosecutors as evidence of his “crime”.

“Erdoğan Alayumat’s detention is like the premise of the situation we are in today,” his lawyer Tugay Bek told Index on Censorship, referring to Turkey’s joint military operation with opposition fighters in Syria’s Afrin. “Alayumat was investigating how some of these groups [fighting in Syria] were trained and provided logistic supplies by the National Intelligence Organization. These claims, which were rumours and hard to assess back then, are today openly accepted without any need for concealment. They’re even saying to critics, ‘What is there to be against about?’ Alayumat was reporting on whether there was or not such a militia power. We are seeing today that there was,” Bek said.

Reporting on MİT’s activities have become taboo in the wake of the discovery of four trucks that were carrying weapons to Syria in January 2015. Far from denying allegations that the trucks belonged to MİT, the government said the weapons were destined for Turkmen groups fighting in Syria but that reporting the news represented a disclosure of state secrets. When footage and photos showing the content of the trucks were published a few months later by the daily Cumhuriyet, prosecutors were instructed to take strong action. The then-editor-in-chief, Can Dündar, was imprisoned along with Ankara bureau chief Erdem Gül. Dündar, who faces up to 25 years in jail on espionage charges for publishing the story, has been living in Germany since his release by a constitutional court decision, but would face arrest if he returns to Turkey.

Former journalist and main opposition Republican People’s party (CHP) lawmaker Enis Berberoğlu was sentenced to 25 years in prison last year for purportedly providing Cumhuriyet with the video that showed the weapons found in the trucks. The sentence was quashed by an appeals court, but Berberoğlu remains in detention during a retrial that began in December 2017.

In this context, Alayumat’s report on a storehouse which MİT was suspected of using to supply weapons by night and provide training to Syrian opposition groups by day represented high-risk coverage. However, for the charge of espionage to be valid, the prosecution must also show which groups benefited from the exclusive knowledge of the report, his lawyer said.

“If there is some sort of espionage, there should be a recipient. Although emails and WhatsApp messages are in the police’s possession, there is no evidence as to whom [this information] was sent to or where. [The prosecution] feels no need to prove the claims,” Bek said.

Alayumat told the court that everything he did was sent to a media organisation. He rejected the accusation that the photographs of the storehouse were to be used for espionage. “When you prepare a news report, you also need pictures. [People] brought me there, I took pictures and interviewed the people in the area. These pictures were taken for reporting,” he said.

He also complained about a serious factual mistakes in the indictment. The indictment alleged that he had joined “the youth structures of a terrorist organisation” during his university years, he said, indicating that this would have been impossible: “I left primary school in grade 4. I had to support my family. I finished primary school years later through distance education. As I didn’t have any university life, this statement is wrong.”

Police aim to beat murder confession out of young reporter

Reports that Alayumat was subject to ill-treatment and torture at a prison in the Mediterranean district of Tarsus made the news a few months after he was detained. His lawyer filed a complaint, upon which Alayumat was transferred to a prison on the opposite coast of the country. He was subject to diverse forms of punishment including solitary confinement and beatings, reports said.

Akman, a 23-year-old reporter who studies law at Dicle University in Diyarbakır, also suffered ill-treatment by police officers. His protests at his improper detention procedures and insistence at calling his lawyer were met with beatings, he said. “Nine-ten police officers battered me,” Akman said, adding that officers also forced him to admit that he killed two policemen in Hatay. “When I told them that I was an anti-militarist and against the killing of people, I was again subject to physical violence.” Akman said he was taken to a doctor for a medical report but brought back without being permitted to see the physician.

Akman, who despite some nerves before the hearing, smiled amiably and gave an impassioned defence to the court.

He said he intended to spend a week with Alayumat and earn a little money by doing reports. “There is an ongoing war on the other side of the border, so we wanted to report on how people living in bordering towns were affected,” he said, explaining that all the notes and pictures he took were intended for reporting. “I am studying law and I had to follow hundreds of cases when I worked as a judicial reporter in Diyarbakır over the course of one year. I am appalled by these accusations. I don’t accept them.”

“I have filed hundreds of reports,” Alayumat told the court. “If you can just look at them, you will see that they are nothing but news reports. What I have been doing is journalism.”