The women behind Open Stadiums risk their lives to assert women’s rights to attend public sporting events in Iran. It’s a daring campaign which challenges the established Islamic order of Iran, and engages women in an issue many human rights activists have not in the past thought important.

But the most potent example of their banishment from public life is that they are prohibited from going to popular sporting fixtures where men compete.

One of the successes of the Open Stadiums campaign has been to build the awareness of this as an issue.

Iran particularly enjoys competing in, and hosting international football and volleyball tournaments, and the Open Stadiums campaign has used Iran’s desire to take part in international competition to challenge the government’s ban on women attending events. In theory international sporting bodies do not allow member nations to use discriminatory practices during matches.

The campaigners face many difficulties. The organisers are worried that as their campaign becomes more successful, they will be identified and tracked. They cannot expand their campaign because they fear any foreign funds they receive will lead to then being identified and jailed, as the Iranian government continues to stifle dissent of any kind. The Iranian regime has a history of putting  women’s rights activists under pressure.

Despite the difficulties and fears, 2017 has been a successful year for the Open Stadiums campaign. But the success of the group has put them increasingly in the spotlight and therefore heightened the risk for them. 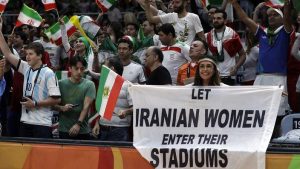 In May, the group used the slight easing of restrictions on public debate during the presidential election campaign to publish 21 demands for women and specifically pushed for women to be able to use public spaces and go to stadiums.

In September, the world’s media covered the fact women, despite having tickets, were refused entry to the football world cup qualifier between Syria and Iran in Tehran.

Two things this year have changed according to Open Stadiums. First, men and women in every match now complain about the ban on women at stadiums. They have been made to feel aware of the discrimination and it is talked about it a lot on social media. Second, MPs and people in power are beginning to talk about women’s rights to attend sports events in a way that would have been taboo before.

“I was happy down in my heart, especially when I read about the other nominees,” said Open Stadiums. “They were such great campaigns and people. I hadn’t heard of them before, and it was amazing to see how many individuals in this world are doing works not for more money but for better days for other people and society. This nomination gave me strength – yesterday when I was at risk of being arrested, I was thinking if i get arrested i know some people at least know about my passion and works i did these years.”