Despite exile and multiple attacks to his family, singer Jamil Ali continues to use his art form to criticise the government in Azerbaijan

Jamal Ali is a young Azerbaijani rapper living in exile in Berlin who – with one song – challenged the authoritarian regime of President Ilham Aliyev this year. His contribution is significant because he is one of the few musicians from the former Soviet Bloc channelling social protest through his music, and getting a reaction back home.

The song in question, was released by Ali on New Year’s Eve 2016. It criticised human rights violations in Azerbaijan, particularly the torture and 10-year prison sentence meted out to two young men who desecrated the statue of the president’s father. The song was called Heykəl Baba (Monument Grandpa). Azerbaijan’s authorities arrested Ali’s mother and threatened his relatives who were still living in Azerbaijan. They said they would not release Ali’s mother until he took down the song from YouTube.

“It was the first time I saw so many people having courage to start and proceed such a campaign. It was a huge support and amazing feeling to know, that so many people understand how is it to lead a fight alone. Because my mother was involved, there was a huge emotional side of the story too. It became our fight together, there was a big feeling of unity, which we miss very much in our country” Ali said.

They also threatened to fire 40 of his relatives from their jobs and impose a travel ban on them. The way the government reacted sent the music video viral on social media sites and Ali’s only compromise was to change the YouTube settings to private for three weeks.  In 2017, Heykəl Baba had almost 152,000 views. Later in May of the same year, the authorities tried to intimidate Ali further. His brother, was arrested at the airport when trying to fly back to Prague and forced to denounce Ali.

This blackmail so outraged the online community both inside and outside Azerbaijan that they shared and re-shared the video, which went viral. It was as much the government’s attempt to suppress free speech with such crude methods as the content which outraged them and united them in anger. By provoking such a harsh response from the government, Ali with one action highlighted the repressive nature of the regime, its ruthlessness in attacking the families of exiles and its lack of tolerance for dissent and free speech. 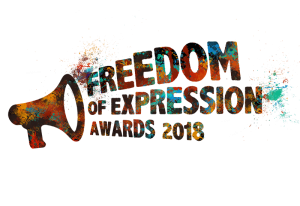 Ali left Azerbaijan in 2012 after being beaten in police detention for taking part in youth protests several months before the Eurovision Song Contest was held in the capital Baku. But he continued his challenge to the regime by releasing a video called Vermişel which he put out just before the Eurovision song contest. Ali’s protest song, covered by the UK’s Panorama programme among other international media, marred the government’s attempts at using the contest for positive publicity for the country, which lead to his nomination for the Index Awards in 2018.

After receiving word of the shortlist Ali said, “I was very glad to hear about my nomination. It’s motivating to know that what we do is important and appreciated. I’m working on new songs and trying to create a broader impact and to give a new hope to the people. The nomination is another chance for me to open my favorite topic and remind the international audience about our fight for freedom.”