Avispa Midia is an independent online magazine that prides itself on its daring use of multimedia techniques to bring alive the political, economic and social world that is Mexico and Latin America.

“As with avispas (wasps), insects that exist across the world that are equipped with various eyes or ocelli capable of distinguishing between light and dark, Avispa Media seeks to participate in and witness the variety of shades that colour reality,” said Avispa Midia. “We believe that modern-day communication should be nourished by the varied formats and technology that characterise new virtual journalism, such as integrating multimedia tools that make information more dynamic. What sets us apart is our critical, far-reaching eye, primarily through reportage and investigative journalism.”

In the Spanish version, the site’s use of pictures, videos, music and maps to illustrate its stories is particularly striking.

But the beauty of the design masks the serious intent of this collective of journalists and researchers who are seeking to challenge violence and corruption in the region and reflect the lives of marginalised and indigenous people.

They specialise in investigations into organised criminal gangs and the paramilitaries behind mining mega-projects, hydroelectric dams, and the wind and oil industry.

The Latin American world they report on is extremely violent. Between 2000 and 2016, at least 105 journalists were murdered in Mexico for carrying out their work. According to Reporters Without Borders, in 2016 Mexico became third highest country in the world for journalist killings — the most deadly outside war zones.

Avispa Midia says its work has meant that human rights organisations and NGOs have taken action on slave labour and undocumented migrants as a result of their reports.

The site however suffers from scant resources and their main challenge is to be able to establish some form of continuous financing, since they do not have a fixed budget to do their work and no one receives a salary.

Topics that Avispa Midia has addressed in the last year include: US interference in Mexico and Central America; the persecution of peasants in Honduras; land restitution demands by displaced people in Guatemala and the first visit of Mexican president Enrique Peña Nieto to the city of Oaxaca. 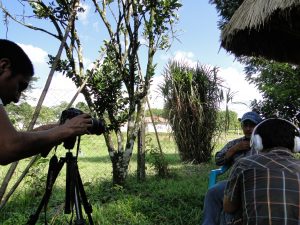 Many of the reports in the last 12 months have been focused on Mexico and Central America, where the media group has helped indigenous and marginalised communities report on their own stories by helping them learn to do audio and video editing.

In the future the journalists want to create a multimedia journalism school for indigenous people and young people from marginalised neighbourhoods, so that ordinary citizens can inform the world what is happening in their region, and break the stranglehold of the state and large corporations on the media.

“In a field where war has contaminated even communication, where truths but also actions are disputed, having been nominated for the Index of Censorship award lifts our courage up,” said Avispa Midia. “And it enables us to reaffirm our investment in the truth and the tenacity of the voices and experiences we carry through each word and each image documented by Avispa Midia. For us, this represents respect and appreciation for the work we have done. This means expanding the support of communities, civil organisations and academic groups that supported us against the violence exerted against journalists in Mexico.”