Mèdia.cat is a Catalan website devoted to highlighting media freedom violations and investigating under-reported or censored stories. Unique in Spain, it has been a particularly significant player in the last year when the heightened atmosphere in Catalonia over the disputed October independence referendum has brought issues of censorship and the impartiality of news, as well as the actions of public bodies like the police and government, under the spotlight.

Without the website, there would have been no online platform to catalogue systematically, publicly and in real time censorship perpetrated by the Spanish authorities against the local Catalan population. One of its most high-profile initiatives has been its Map on Censorship. This was set up two years ago in response to the Spanish government approving a so-called gag law, limiting the right to protest and effectively stopping people filming police officers. The Map on Censorship website was used particularly effectively during the 2017 crisis over the Catalan referendum campaign, giving the population in Catalonia live information about censorship, and other violations.

Between September and November 2017 as part its Map on Censorship initiative, journalists at Mèdia.cat documented and raised awareness about more than 125 possible restrictions on freedom of expression or information. All the incidents were related to the independence referendum in Catalonia of 1 October 2017, including both the lead up to the poll and its aftermath. The site deployed a team of 11 volunteer journalists to provide live updates on media freedom violations. The crisis in Catalonia in the last few months increased the reach and significance of the Map on Censorship with the map having 55,523 visits from 1 January to 12 November 2017.

Mèdia.cat describes itself as a critical media watchdog. It is run by a group of local Catalan journalists and publishes in Catalan about Catalonia. The financing for Mèdia.cat projects comes from a variety of sources including grants from the Catalan local government and the Barcelona City Council, crowdsourcing, foundations and donations. Mèdia.cat maintains its independence and is part of the Ramon Barnils group of journalists.
Mèdia.cat’s Hate Speech Media Watchdog ( https://www.media.cat/discursodimitjans/) also identified eight far-right media outlets in Spain which use fake news and other strategies to spread racism, xenophobia and islamophobia, among other forms of discrimination. 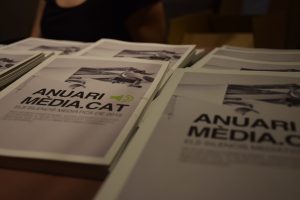 On their spot on the 2018 shortlist, Journalist at Mèdia.cat said “It is a great honor to be nominated to the Freedom of Expression awards. We were inspired by Index on Censorship’s work when we launched our Map on Censorship in 2015, which nowadays has become one of our most relevant projects. The nomination itself feels like an award for us. Especially in the current context, where freedom of expression is at stake in Catalonia and the Spanish state. Journalists have suffered physical aggressions, threats and other restrictions to their jobs, some artists have been censored and even retweeting a critical message can get you accused. We need to fight against this situation, unique in Western Europe, and this nomination is a great encouragement to do so.”