Winning a lawsuit against the CIA, the American group aims to give people better access to government documents

MuckRock is a non-profit, collaborative news site used by journalists, activists and members of the public to request, receive and share government documents from any agency that is subject to transparency laws in the United States. Their aim is to make policies more open to the public, and democracies further informed.

“MuckRock has continued to double in size each year,” said MuckRock. “We hope to continue increasing our impact, putting cutting edge transparency tools in the hands of journalists, whistleblowers, researchers and ordinary people to have impact at the national, international, and local levels.”

The site, which has a user base of 10,000, hosts an archive filled with hundreds of thousands of pages of original government materials, as well as information about how to file requests, and tools to make the requesting process easier. MuckRock has filed over 40, 000 requests, shedding light on government surveillance, censorship and police militarisation among hundreds of other issues. The site’s staff and contributors use the documents received through the site to create original investigative reporting and analysis.

MuckRock filed and won a lawsuit against the CIA, which resulted in the release of 13 million pages of previously secret documents from the CREST Database – the CIA’s database of declassified information dating back through the Cold War. The foundation also fought off a lawsuit from multinationals seeking to hide security flaws in their smart metering technology.

Their work investigating the US government’s 1033 programme, which supplied local police and the private prison system with military equipment, helped lead to major reforms of these policies.

Stories that MuckRock have reported on over the past year include: gaps in gun violence data, surveillance footage from the top of the Smithsonian building on inauguration day – contributing to the debate of the true crowd size, and classified CIA documents that were left stashed in the Rockefellers barn.

After he had been in office for over a year, MuckRock investigated the effects of president Trump’s harsher immigration policies, and found that the number of deportations was actually decreasing, while the number of people held in detention centres was rising.

The site has had a particularly successful 2017, seeing its 10,000th public records request successfully completed. They also celebrated International Right To Know day by expanding their reach to Canada, which is ranked a lowly 49th out of 111 countries on the RTI Rating. 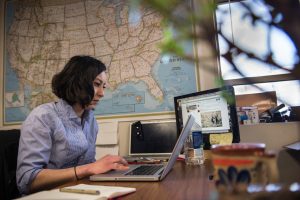 The site has also focused on expanding its education about requesting documents, and produced a Freedom of Information Act 4 Kidz lesson plan to help educators to start discussions about government transparency.

“It’s impossible to quantify the impact of this acknowledgement of our amazing transparency community,” said MuckRock. “This nomination recognizes the important work of all the MuckRock users who have fought to open up government on so many issues, often facing bureaucratic hurdles and legal threats to create a strong civic society for all.”