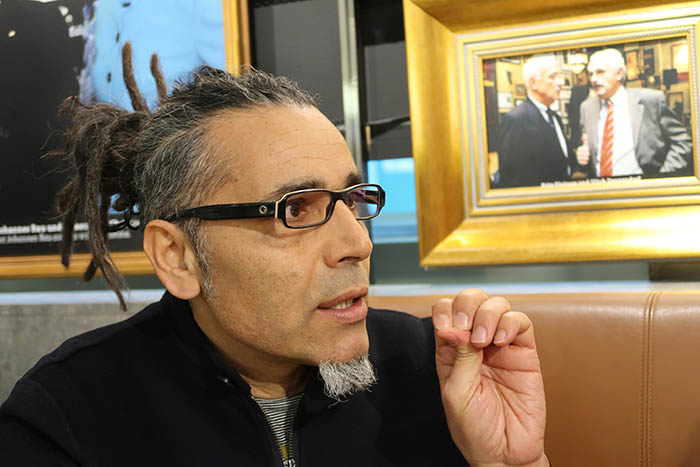 Even before the attempted coup in July 2016, the situation for academics within Turkey was drastically changing.

Marking a turning point for the country’s political environment, the failed July 2016 coup was an attempt to oust president Recep Tayyip Erdogan.

In 2016 hundreds of academics were dismissed from their positions without notice, including sociologist Sharo Ibrahim Garip, who taught at Yuzuncu Yil University in the East Anatolian city of Van, Turkey.

A German national with Kurdish roots, Garip was dismissed from his position at the university in February 2016. Accused of spreading terrorist propaganda, he was arrested in January 2016 and placed under a two-year travel ban, after he signed a petition, along with 1,227 other academics, urging the Turkish government to end its crackdown on Kurdish communities in Turkey’s southeast.

The petition by Academics for Peace called for a peaceful situation to the conflict with the Kurdish Workers Party (PKK), a terrorist group seeking an independent Kurdish state within Turkey. Garip and the other academics denounced “war-like conditions” in the south-east and accused the government of an “extermination and expulsion policy” following the end of a ceasefire with the group and Turkish security forces in 2015. President Erdogan referred to them as “so-called intellectuals” and accused the signatories of “treason”.

Although there was no evidence Garip supported the group, he was still unable to leave the country or practice his profession, although his German citizenship prevented him from being detained pre-trial. Now working at the University of Essen-Duisburg, Garip spoke with Danyaal Yasin of Index on Censorship about his dismissal and the situation for academics following the coup.

Index: After you and hundreds of other academics were dismissed, what were your initial thoughts?

Sharo Ibrahim Garip: I was at the university. I received just a one-sentence decision from the university administration: “Mr Garip’s contract has been cancelled as the university no longer requires his services.” It was not surprising to me because I had already expected such an outcome. The history of the Turkish state is rife with instances of the elimination of political opposition, particularly critical thinkers such as academics and journalists. It was a planned action to eliminate critical thinkers from universities and the public sector. All those changes in the bureaucracy and public sector started before the military coup and continued following the civilian putsch. I could clearly observe the regime change in silence, but it was not possible to stop.

Index: Where were you when you found out? How did this affect you and your family?

Garip: I was detained on 15 January 2016 at the university in Van. I had to spend one night and one day in a jail cell of the special anti-terror unit of the police. I realised that I was a hostage from the beginning. I was threatened and humiliated during my interrogation. My family (who live mostly in Norway and Austria) was extremely concerned for my life. They still recall the events of the 1990s in Turkey, when many people were jailed/tortured or murdered, including the well-known cases of Hrant Dink and Tahir Elci, as well as many other intellectuals. The signatories have also been publicly exposed in the press and social media by government supporters and nationalists, leading to fears of reprisals from a mafia boss who declared that they will “spill the blood” of the signatories.

Index: What was the most difficult part?

Garip: I was removed from my academic position at Yuzuncu Yil (One Hundredth Year) University in Van in February 2016 because I had signed the petition by Academics for Peace, calling on the Turkish government to pursue a peaceful approach in its conflict with the Kurds, and in order to further punish me, the government forbade me to leave the country. I experienced a kind of structural violence, to live in Turkey without a job, health insurance, or a home. I shared a flat with friends for a while. I was trying to survive under very difficult conditions. I also experienced psychological violence. For example, all my phone calls were tapped and I was under regular surveillance. These had a very deep psychological effect on me. I didn’t want to meet with friends because I was constantly afraid of being attacked, imprisoned, killed, or tortured.

Under such circumstances is almost impossible to teach or produce any kind of academic work, write articles, do research, and so on.

It was painful to observe a country sink into political disaster again. Escalation of tensions, political collapse, and the war go back to the 90s, with civil war, political murders, missing people, bombing attacks on peaceful gatherings and meetings. It is also difficult to accept that at the moment approximately 70,000 students are in prison. One of my best students (who is only 22 years old) has been sentenced to 10 years in prison.

Index: Did you have to conceal your Kurdish heritage when studying or teaching?

Garip: No, I have never concealed my heritage. On the contrary, I disclosed my Kurdish heritage from the first day of teaching at the university in Van. Every day I talked to my students first in Kurdish and then continued in Turkish or sometimes in English. I arranged a Kurdish language course for sociology students as well. Kurds in Turkey have been assimilated for many years, a humiliating experience. Most Kurdish students have been psychologically damaged/traumatised by the violence perpetrated by the Turkish government. It was important to me to give my students a feeling of self-worth. This enabled me to establish a foundation of trust with my students, something not many other academics did.

Index: Why do you think academics are being brought to trial? What is the government’s goal?

Garip: It should be mentioned that Turkey has never, since its inception in 1921 until today, been a truly democratic country. Neither academic freedom nor freedom of speech has ever truly existed. The Turkish government has always thought of academics as well-paid public servants, a position which enjoys great privilege. Most Turkish academics have generally been loyal to the state and supported the official ideology. The petition for peace represented the first time that academics showed disloyalty to the state ideology, especially with regard to the Kurdish issue. For an authoritarian regime, such criticism was simply not acceptable. In this way, the government will punish academics. Turkey now appears to be inclined to go from an authoritarian regime to a totalitarian one. All undemocratic regimes try to maintain total control over society (the consolidation of institutional powers such as the NS regime). The masses must be repressed, and the media and intellectuals must be silenced and browbeaten. This is the goal of the government, which is why academics have been brought to trial. The academics have been punished in a number of different yet effective ways: dismissal, foreign travel bans, disciplinary processes.

Index: What has been the biggest change for academics in the country since the attempted coup?

Garip: The universities, schools, media, judiciary, and also parliament are now under the total control of the government. In particular, schools, the media, and universities have been shaped by a new ideology, which is both religious and nationalist. Many academics have been dismissed; more than 150,000 people in the public sector have lost their jobs. In the wake of the civilian putsch, 40,000 teachers, 8,247 academics, and 4,000 prosecutors and judges have been dismissed.

At universities, cultural events and demonstrations are forbidden. Students are not allowed to choose topics for their master or doctoral studies. At the moment four academics are in prison and another 15 academics and I have been sentenced to one year and three months in prison. Academics in Turkey are trying to survive; many of them live in very poor conditions. They have come up with new ideas such as establishing houses of culture or academies on the street. It is important to mention that academics and intellectuals all over the world, including Judith Butler, Etienne Balibar, and many other prominent academics have supported academics in Turkey. The quality of education is declining rapidly because many well-educated professors and instructors are leaving Turkey.

Index: Was there backlash from other academics when the petition came out?

Garip: Yes, at first. After the petition for peace came out, a petition titled “We support our government against terrorism” was signed by 5,000 academics. Some colleagues at the university definitely distanced themselves from me. The reason for this was partly ideological and partly out of fear. However, some academics supported me, as did most of my students.

Index: Do you feel the current climate will ever improve within the country?

Garip: I don’t like to be completely pessimistic but it is very difficult to expect much change within a short period. Possibly the situation may improve over the long term. At the moment we are confronted with a regime change and a government acting in desperation. Turkish society is extremely polarised and the political climate embittered. Structures within the government have been almost completely stripped down. It will be not easy to shift society from an authoritarian structure to a democratic one. We cannot forget that half of Turkey wants a secular and democratic government.

Index: You are now based in Germany – how does it feel to teach again?

Garip: It is wonderful. Here I enjoy a climate of freedom with my students. As I stated above, I have academic freedom and freedom of speech here which I wish my Turkish friends also had. While I was in Van, Turkey I invited many professors from London, Canada, and Germany to give lectures to my students via Skype. I wish to thank them for their excellent contributions. If I have the opportunity I would like to teach my students in Van from Germany via Skype as well.

Index: How has your work changed since leaving Turkey?

Garip: To be honest it was not easy to settle down. I had to start from the bottom again. But thanks to the social government and constitutional democracy in Germany, I was fortunate to receive help from many of my friends. I received a scholarship first for three months from the University of Essen-Duisburg and now have a fellowship from the University of Cologne. I am currently working on a research project. I have finished a new article and can publish it without fear. In short, I enjoy academic freedom and freedom of speech again. I wish all my friends in Turkey could enjoy such freedoms as well.

Index: Do you think you will ever return to Turkey?

Garip: Yes, of course I will. Travelling is an essential human right. I will visit my friends there or attend conferences and work on research projects.

A previous version of this article incorrectly stated that “the intended coup was an attempt to protect the country’s democracy from president Recep Tayyip Erdogan”. This was updated on 24 April 2018