Crime writers have less to lose than travel writers in describing the underside of holiday spots, argues Rachael Jolley in the summer 2018 issue of Index on Censorship magazine.

When you read a novel, it takes you on a journey to a different time or place. Being an avid reader of crime fiction, my early journeys to Chicago were in the company of Sara Paretsky. I walked the streets with her VI Warshawski. We shot down North Michigan Avenue and headed out to Wrigley Field for the fifth inning. Chicago opened up to me in those books – not always gloriously.

Donna Leon showed me around the small islands of the Venetian Lagoon and Ian Rankin has taken me on numerous tours of the dark closes of Edinburgh, as well as its swankier New Town.

Crime writers have less to lose than many other authors in describing the underside of the cities. After all, their readers don’t expect a fairytale, and their escapism is a different kind from the happy-ever-afters of the perfect beach-read.

Perhaps we get more accurate portrayals of cities or countries by crime writers than in guidebooks or from travel apps.

Take Mexico and the Maldives, for instance. These are sexy holiday destinations, popular with everyone from honeymooners to scuba divers. But when thousands of holidaymakers are packing their sunscreen and swimsuits, do they know of the catastrophic numbers of journalists killed in Mexico in the past few years? Or how journalists in the Maldives are fleeing in fear of their lives?

Ad-hoc, non-scientific research, through the medium of asking friends and family, suggests not. And when that information is received, it is with some shock.

The results are stark. Many top tourism destinations do terribly on freedom of expression. 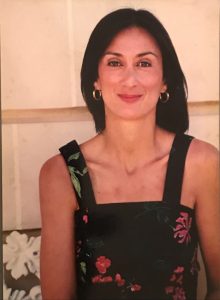 The other side: Maltese journalist Daphne Caruana Galizia was murdered on 16 October 2017

Mexico is ranked 147th out of 180 in the 2018 Reporters Without Borders World Press Freedom Index, down from 75th in 2002. During this period, tourist numbers have continued to go up. Meanwhile, 4.6% of the government’s annual spend continues to go on tourism, significantly more than is spent in Brazil and New Zealand, for instance.

Travel and tourism delivers 6.9% of Mexico’s GDP, compared with 3.3% of Brazil’s and 5.1% of New Zealand’s.  No wonder, then, that Mexico’s government is prepared to invest in tourism, and to keep that tap firmly switched on.

Informed tourists could be a powerful pressure point on governments that have been practising repression of those voices raised in criticism, or that don’t bother to pursue the criminals who threaten or kill those voicing dissent.

At this year’s Hay Festival, I was on a panel with Paul Caruana Galizia, son of the murdered journalist Daphne, as well as Malta journalist Caroline Muscat of The Shift News, and BBC Europe editor Katya Adler. Paul talked about his mother’s work, the pressures she was under and how she pursued her investigations. We discussed the wider situation in Malta, where 34 libel cases against Daphne have, since her death, rolled over to the rest of the family. During the question and answer session, some members of the audience said they had no idea about what was going on in Malta, even though they went there on holiday, and asked what they could do to help.

Paul suggested that anyone holidaying on the Mediterranean island might mention being aware of the case to local people they met. The island was dependent on tourism, and if the Maltese felt this could be affected there would be more pressure on the government to alter its attitude, and legislation, on media freedom.

He also believed the Maltese government was much more worried about international attitudes than local ones.

In places where freedom of expression is under pressure – and Malta, the Maldives and Mexico are just a few of them – tourism is often a valuable asset. So visitors who are aware of the wider situation could be advocates for change.

According to analysis of travel, tourism, financial and freedom-of-expression data carried out for Index on Censorship magazine by Mark Frary,  there are indications that some tourists want to know more than whether or not a destination has a good beach before they head off on holiday.

Data on travel patterns suggest that travellers also “reward” destinations that change legislation or the environment, his analysis suggests, with Argentina picking up significant tourist numbers after it became the first South American country to make gay marriage legal.

In this issue, we have asked reporters around the world to dig into the details of popular holiday destinations to look at their records on freedoms, such as the right to protest, the right to debate and freedom of the media. The results are stark. Many top tourism destinations do terribly on freedom of expression.

In post civil war Sri Lanka, there was a period of hope after the election of Prime Minister Maithripala Sirisena in 2015. Many hoped that this beautiful island could have a future that was less violent, more equal and more open. Those hopes are now looking tarnished. As Meera Selva reports for the magazine, the country’s tourist numbers grew spectacularly in 2017. But while tourists flocked in, the great improvement was not going as well as Sri Lankans had wished.

The prime minister has reactivated the Press Council – a body with the power to imprison journalists –  and civil rights activists report threats against them. In this potential Eden, the garden is not as green and pleasant as predicted.

Pretty beach paradise Baja California Sur is a popular holiday destination, particularly for Americans. But not many will know that it also has the second-highest murder rate in Mexico, behind the western state of Colima, according to government data. The dangers of being an investigative journalist there are particularly high, with some living under 24-hour protection, as Stephen Woodman reports in the magazine. Again, this is a place where many (probably most) tourists are unaware of the fuller picture of the place where they are happily enjoying the sunshine.

As someone with a heritage collection of guidebooks from publishers including Lonely Planet, Rough Guides and Footprint, it is easy for me to flick through the pages and see that those guides have made a fair effort to inform readers on questions of human rights, politics and safety in the past.

With most people looking to the web for all their holiday information, are they finding themselves as well-informed as they would have been with a well-thumbed book under their arm?

An April 2018 travel section article about Malta’s capital Valletta on The Guardian’s website doesn’t mention the politics or human rights record of the island. Nor, as far as I could find, did the Lonely Planet website section on Malta. While, of course, it would be possible to find news about those issues on different parts of The Guardian site, or elsewhere on the web, it’s certainly not connecting the dots for travellers.

With the printed travel sections of newspapers under pressure from advertisers – and far smaller than they were a decade ago – there is little space to create in-depth reports, and travel articles that include gritty details as well as the delights seem few and far between.

At the upcoming Index magazine launch and summer party on 4 July, our panel of experts will discuss what responsibility authors might have to tell their readers about the good, the bad and the ugly sides of any destination. It should be an interesting evening, chaired by BBC World reporter Vicky Baker, who also writes for Guardian Travel. If you would like to join us, email [email protected] to grab a free ticket.

And since we are just back from the Hay Festival, we can also recommend our special Hay Festival podcast, where deputy editor Jemimah Steinfeld chats to three authors about taboos. Catch it on Soundcloud.com/indexmagazine.

Finally, don’t miss our regular quarterly magazine podcast, also on Soundcloud, including an interview with the founder of the Rough Guides, Mark Ellingham. Come by and visit us.

The latest issue of Index on Censorship magazine, Trouble in Paradise, Escape from Reality: what holidaymakers don’t know about their destinations is out now.  Buy a subscription. Buy a print copy from bookshops including BFI, Serpentine  and MagCulture (London), News from Nowhere (Liverpool), Home (Manchester), and Red Lion Books (Colchester), or via Amazon. Digital versions available via exacteditions.com or iTunes.