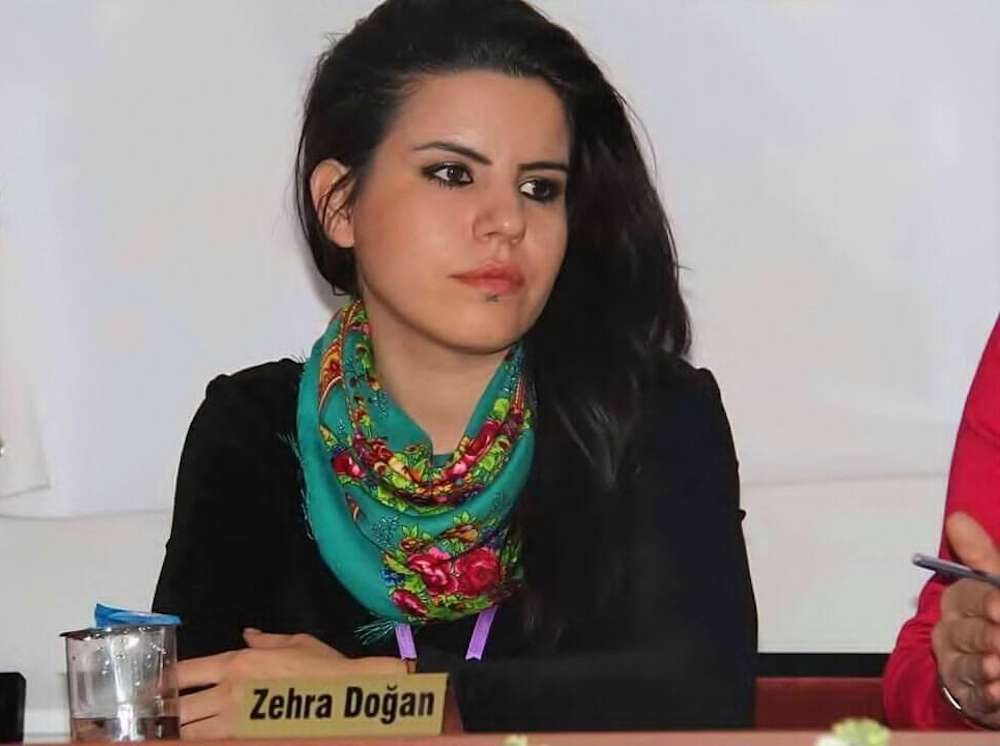 The last time Onur Erem and his girlfriend Zehra Doğan, a Turkish artist and journalist, met face-to-face, she was chirpy and seemed happy, he recalls. They sat at a picnic table and talked about her art being concurrently exhibited in various places around the world, from New York to Europe. They were surrounded by other families, busily conversing amongst each other at the picnic tables to their left and right.

But this was no picnic. Two prison guards walking up and down the aisle in between two rows of tables screwed to the concrete floor, eyeing the prisoners and their families with forced indifference masking wariness, made sure no one lost sight of the fact.

“She was in good spirits,” Erem says, attributing it to her continuing to create art while in prison, just like she did on the outside, before her sudden arrest as she was awaiting the outcome of the court case against her on charges of spreading propaganda in favour of a terrorist organisation.

“She writes down the stories of the people she met there. Since there’s not much in terms of the supplies on the inside, she uses the dyes that she makes from food. They don’t give her canvass, so she draws either on clothing or envelopes from the letters she receives. She collects the bird feathers that fall in the prison yard and makes improvised brushes out of them,” he explains.

The reason for Doğan’s incarceration was the drawing she made while covering the Turkish military operation in the town of Nusaybin on the border with Syria, populated mainly by Kurds. The drawing was made based on the photograph that had previously been circulated widely by the Turkish military on social media, according to press reports and Erem. The point of contention is whether the original photograph did or did not include the flags of the Turkish Republic hanging from buildings half-destroyed during the operation.

“She drew a military vehicle in the form of a scorpion. I’d say, this was her only addition to the photograph itself,” he says explaining that the military vehicle his girlfriend depicted in such a manner is referred to as “Akrep”, the Turkish word for a scorpion. “However the judge, in spite of all the evidence presented, sided with the opinion that the photo was taken by Zehra herself, that the original photo didn’t contain the Turkish flags hanging from the destroyed buildings and that [she] added them on for propaganda purposes, and thus, by way of this picture she was engaged in a propaganda on behalf of a terrorist organisation.”

The widely-shared narrative is that Erdogan lashed out against artists after the July 2016 coup attempt. However, his government had gone after scores of artists and their freedom of artistic expression much earlier, of which Doğan is but one example. Two years after the coup, the crackdown doesn’t seem to dissipate, and the arrest of Turkish rapper Ezhel on inciting drug use in his songs on 24 May 2018 being the latest occurrence.

Attacks on artists across Turkey range from firing of one of the country’s most prominent orchestra conductors İbrahim Yazıcı for his criticism of the Erdogan government, to decapitating Ankara University’s theater department by dismissing Tülin Sağlam, its head and five other senior professors critical of the authoritarianism; from arrests of popular cartoonists, such as Cumhuriyet newspaper’s Musa Kart, to handing down a 10-months sentence against Zuhal Olcay, one of the country’s most popular singers and actresses.

The limitation of artistic freedoms is clearly a trend in Turkey, says Julie Trebault, Director of Artists at Risk Connection, an artistic freedom non-profit based in New York, adding that while in the past two years the attacks have escalated, they’d started before the coup attempt.

Years in the making

“We have several cases, for example, the case of the two filmmakers who have released their film, Bakur in 2015. Bakur was screened at many festivals in Europe for a couple of months without being censored or attacked. And then, in 2015, at the 34th Istanbul film festival, just hours before the premiere, the film got censored,” she recalls, explaining that the film was a documentary about the PKK, a Kurdistan Workers’ Party that is considered a terrorist organisation by the government of Turkey.

As to the persecution of artists even before the coup, Trebault adds “When Erdogan became president, things went down and down and down in Turkey. It took years to arrive where we are in Turkey [now]”.

Turkish filmmaker Elif Refiğ sees the roots and the reasons for the persecution of artists in the Gezi Park protests of 2013. “There had been a very serious oppositional sentiment that had collected in the society until then, that failed to organise until that moment. A very important feature, it included artistic institutions, and its nature was very creative to the extent that it changed the very definition of ‘disobedience’,” she says. According to her, it was a completely peaceful campaign spearheaded by arts institutions that didn’t tolerate violence, and it spread all over the country.

Refiğ points out that in addition to arrests, torture and jailings as ways for the state to punish the disobedient artists that often meet the eye, there are other ways of applying pressure: “The economic obstacles make the lives of the artists miserable. Blacklisting. It makes it difficult for the people to find work, impedes their freedom of movement.” As the case in point, she cites Füsun Demirel, popular television and cinema actress who has been struggling to find work for the past three years because “she is a Kurd, and because she openly voiced her opinions.”

As harmful as it is for the arts in Turkey, the crackdown on the freedom of artistic expression has also affected the general public, Trebault says.

Responding to a question about the public’s reaction, Refiğ says that, although, the general public is critical, “Where would the criticism from the society be coming from? At this point, all television channels, all newspapers have been silenced by the forces in power.” She explains that multiple ongoing court cases against the media outlets are having a chilling effect on the public.

While the Turkish society is succumbing to self-censorship and its artists are fighting to get out their artistic word amid incarceration and repressions, the international community is struggling with possible solutions.

“In my personal opinion, the international support is coming to Turkey too late,” says Refiğ. She explains that some international institutions like Pen America or Amnesty International are doing their best to call the international attention to the ongoing crisis with the freedom of expression in Turkey, while others, “institutionalised international organisations,” as she terms them, such as the E.U. and the Council of Europe, for instance, have their own pressing concerns-not letting the mass influx of refugees from the conflicts in the MENA region to cross into their borders, and, therefore, desperately needing the co-operation of the Turkish government.

“At very critical points, when they shouldn’t have restrained their words, they stood by our government, as they were afraid of the opening of the borders [by Turkey] and a free movement of Iraqi and Syrian refugees to Europe” she says of the international institutions. “Hypocrisy is the word that even might come to one’s mind.  Words-wise, there’s a lip service to improving the human rights situation in Turkey, but action-wise, there’s very little acting upon it, unfortunately.”

Trebault, on the other hand, says Turkey, as a member of various international bodies is a signatory to important international human rights treaties, and Western governments should call on its government to abide by them.

Looking into the future, Trebault says she doubts things will get better in the next few years in Turkey.

“In 2017 the referendum gave even more power to the president,” she says of the plebiscite that effectively abolished the parliamentary system existing at the time and replaced it with the presidential system with a much stronger executive. “So, to be honest with you, I don’t think there will be changes for the better with this government,” she says.

Back in Diyarbakır’s E-type maximum security prison, while counting days until her release, Doğan is also pondering her future.

Making plans for after her release upon completing her two-and-a-half-year sentence next February, Erem says Doğan plans to continue working on her art, as well as her work as a journalist. “Currently, there’s an exhibit of her artwork In France that includes paintings and drawings smuggled out of the prison, as well as her previous work. This draws the attention of the artistic community, as well as the society at large, that’s why she wants to continue.”

He says that his girlfriend is also taking notes while in prison that she’s planning to use for writing a book when she is out.

“Of course, the solidarity that she sees on the outside also helps a lot. [It] helps her and her jailed friends to keep their spirits high, as they see that their voices are heard on the outside and there are quite a few people who don’t want to leave their side.”

Latest posts by Tamara Grigoryeva and Ismail Djalilov (see all)